New York Diary | The Guy on the R Train

Welcome to the first instalment of weekly musings on NYC culture, fashion and lifestyle from PHOENIX’s man on the Big Apple street, Matthew Bryan Beck 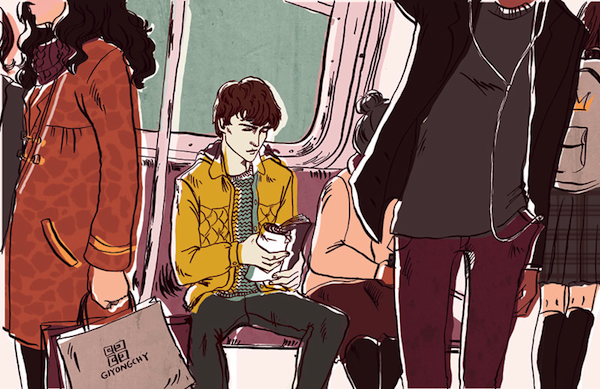 Every day of my morning commute, I see the same guy on the uptown R Train because we invariably get in the same car. I haven’t decided if he’s stalking me, or I’m stalking him. If it weren’t so awkward it would be quite romantic (bro-mantic?), like the opening scene of a Nora Ephron movie. (The likely reason is that we have both strategically figured out that the same car door stops directly in front of the Prince St. exit.) I’ve never spoken to him. I don’t know who he is, or what he does.

Tall-ish, olive-skinned, he proudly sports a pencil-thin, trimmed beard, and the inflated arms and bull-like shoulders of a bro who only does upper body. Crude tattoos cover his arms, in memoriam of family members, naked pinups, and flags of Italy. (Or is a flag of Mexico? I imagine his name is Miguel or Carlos or Jose. He looks like a Jose.) He wears the same odd ensemble: tight white t-shirt, boot-cut flared jeans, flat-brim baseball cap, oversized headphones, and a petite backpack that seems ladylike and effeminate. It’s a curious hybrid of hyper-masculine swagger, metrosexual grooming, and bizarre, mismatched fashion pieces.

New York is a city of eight million. Statistically, you’d think you could go about your entire life and never see the same person twice. But in New York we see the same people all the time: at the bus stop, at the deli, at the coffee shop, at the gym, in the park. New York is surprisingly insular if you frequent the same neighborhoods. The difference is New Yorkers don’t acknowledge this phenomenon to each other. New York is a city of eight million egomaniacs and narcissists. We’re too busy and important to stop and say something nice and decent to someone like, “Hey, we’ve gone to the same gym/deli/coffee shop for years, just thought I’d say hi and introduce myself.”

There’s something about travelling in the same direction with complete strangers. It’s an equalizer. It gives us a commonality and shared experience. Even though we are from all walks of life, dramatically different from each other, we are in it together for duration of the ride.

I’ve become conditioned every morning to look for the guy on the R Train. I play a little mental game of whether or not he will be wearing the same funky getup, or will be sitting in the same subway car. He very rarely looks up from his phone, and I rarely look up from my book. (I try to catch up on the classics on my commute, but I think I’m like most straphangers, only pretending to read books or magazines or newspapers to avoid looking at other people.) Our eyes have never met directly, but I can feel that he senses me and also internally recognizes the weirdness of seeing the same exact random stranger every single day on a subway. Sometimes we pass through the exit turnstiles side-by-side, silent, hustling up the steep gum-stained stairs to our final destinations. Above ground, we divorce each other for the day: he turns left, I turn right, swallowed by the maddening crowd of Prince & Broadway.

But I know I will see him the next morning, like the old Warner Bros. cartoon of the wolf and sheepdog time-clocking in and out. His daily presence on the train is comforting. He adds a sense of familiarity and normalcy to the repetitive, mind-numbing dullness of my public transit reverie. When I don’t see him, my heart sinks. I am disappointed. I…miss him. I feel a pang of loss, like a fallen brother in battle. I concoct scenarios of what might have happened to him. Maybe he took a different car? Maybe he went in early? Maybe he’s running late? Maybe he’s dead, running across the street and struck down by a bus?

I realize this about New York, and maybe also people in general: we don’t want real, authentic human moments and connections, we just want to be reminded of them. We are intensely selfish and conflicted. We crave interaction and conversation, but when given the chance to interact and converse, we don’t. It requires too much time, and time is one thing New Yorkers don’t have.

Practically, I don’t wish to be involved in Jose’s life, nor do I imagine he wishes to be involved in mine. But for ten brief and silent minutes on a ten-foot wide subway car hurtling beneath the earth, we cannot escape it.