In the urban jungle, only the fiercest survive 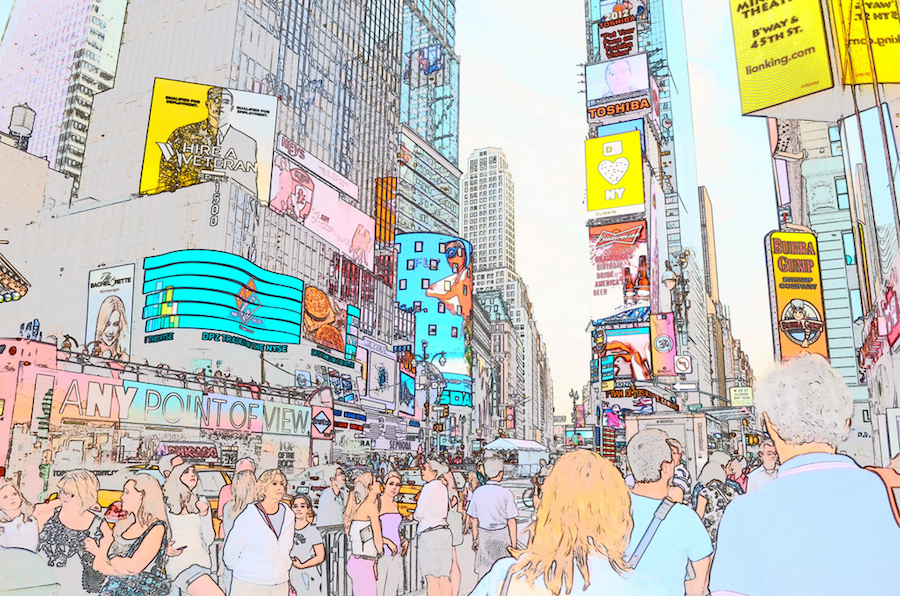 In a 1924 New Yorker essay entitled ‘The Confusion of Our Sidewalkers: And the Traffic Problem of the Future in the Erratic Pedestrian’, columnist M. B. Levick humorously and insightfully described the increasing boldness of pedestrians of pre-war Gotham:

“Does the world offer worse sidewalk manners than those of Manhattan? Savages in distant isles stroll more urbanely through nine-mile streets like the jungle trail of Typee and never elbow their way with a war club. Medieval streets two feet wide, with the rooftops overhanging, give the Old World traffic cop nothing to do save to help the occasional plump pedestrian who sticks between the walls… But New York, orientation smitten from it, rushes in where angels fear, and if there is anything in the transmission of acquired characteristics it bodes ill for the future.”

Nearly 80 years later, that phenomenon has evolved into nothing short of lunacy.

New York is a city where pedestrians own the streets, not the cars. Manhattan is overrun by throngs of jaywalkers, like ants on an anthill, frantically crossing with no thought for oncoming traffic. (The term “jaywalker” — from a jay, or a silly or foolish person — was coined in a August 3, 1924 New York Times editorial about the increasing presence of pedestrian menaces.) Manhattanites have zero regard for street signs and lights. Heads buried in our phones, we are oblivious to the dangerous world around us. We glance both ways, with barely enough time to blink, and barrel right through to the next corner like linebackers through an offensive line. Manhattanites treat public crosswalks like personal catwalks. We cross the street as if we own it, as if blind to the hurtling death machines seconds away. The frustrated drivers are helpless before the mass of humanity that darkens their windshields.

Not surprisingly, Manhattan has four times as many pedestrians killed or severely injured per mile of street compared to the other four boroughs. (Although people crossing the streets aren’t always to blame; of crashes resulting in pedestrians killed or seriously injured, ’driver inattention’ was cited in 36% of cases, and 27% of fatal pedestrian crashes involved driver failure to yield.) But here’s a wrinkle: 43% of pedestrians killed in Manhattan lived in other boroughs or outside New York City. Almost half of people who were killed by a car crossing the street in Manhattan did not live there. They were mostly tourists (New York City hosted record 52 million tourists in 2012, a healthy 2.1 percent increase over 2011) and bridge-and-tunnelers out on the town, unaccustomed to the insane volume of cars and people. Their reflexes aren’t tuned to the sheer terror of a busy Manhattan avenue.

But true New Yorkers know no fear. This is a very particular learned behavior, unnatural in the extreme. Both humans and animals are born innately cautious, to help preserve the species from attackers. In her book On Looking: Eleven Walks with Expert Eyes, cognitive scientist Alexandra Horowitz explains the special acquired skill of the urban pedestrian: a deft and intuitive manoeuvre known as the “step-and-slide,” the secret to urban swarm management:

“The importance of this ‘looking’ in the success of the dance comes into play with the relatively new species of pedestrian on the street: phone talkers. Their conversational habits change the dynamic of the flowing shoal. No longer is each fish aware, in a deep, old-brain way, of where everyone is around him. The phone talkers are no longer even using their fish brains: they have turned all their attention to engaging with the person on the phone. They block out their sense of someone walking too close; they fail to look into their walking ovals and step-slide out of the way. They no longer follow the rules that make walking on a crowded sidewalk go smoothly: they do not align themselves (they swerve); they do not avoid (they bump); and they do not slip behind and between others (they blunder). They stop minding the social convention to stay to the right, and weave across lanes of traffic. Texters are as bad or worse: they fail to even move their heads before turning, since they are slumped over to monitor their texting thumbs.”

New Yorkers have developed aberrantly, morphed into schizophrenic urban Übermensch who have forgotten the laws of the jungle. We have places to go, things to do, people to see, and we can’t be bothered with stop signs, even when they save our lives. Taking 30 seconds or less for cars to pass is asking too much of a New Yorker. We should be squashed like ants, but we won’t stop jaywalking. We prefer to live life on the edge. New Yorkers don’t do rules. Chained to the small screens of our mobile devices, we daily escape death by auto, too busy to stop and kiss the asphalted ground of which we nearly became part.