Bright lipstick makes the journey from Thebes to Tribeca 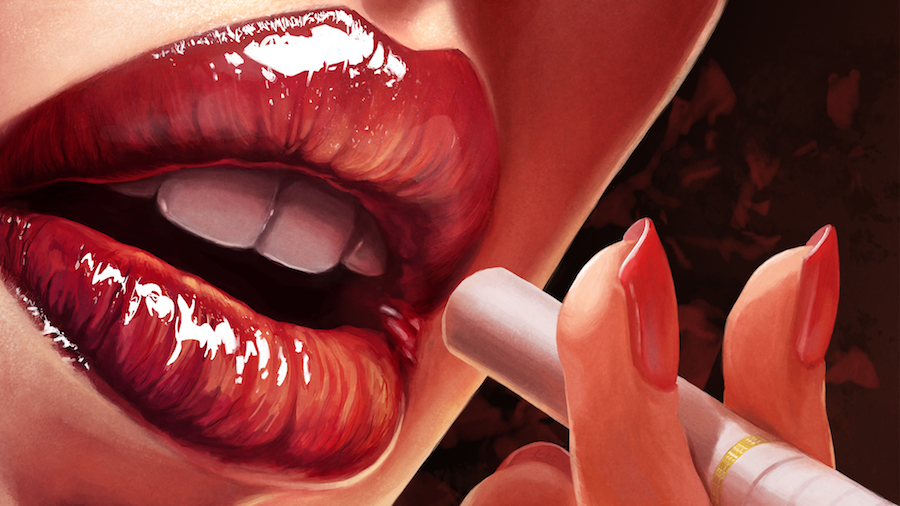 Over the summer, I went on a date at a charming little French cafe in Tribeca with a very attractive young lady who wore an absurdly orange shade of lipstick. As she talked, all I could see was that wild lipstick. I was hypnotized by its metallic gloss, how her mouth seemed to move like liquid mercury; an aperture of phantasmagoric chroma and tangerine sheen.

Heavy, bright lipstick seemed like something for old Jewish ladies, or an actress walking the red carpet in an evening gown, or an angst-y goth kid sulking behind black hair and eyeliner. (And drag queens in the Meatpacking District.) In their teens, girls of my generation seemed to prefer natural-looking nude lip gloss and neutral tones. Now in their 20s, these young women – White, Black, Asian, Hispanic – are wearing big, bold, colorful lipstick, thick and sweet and sticky as cupcake frosting.

Wine red, apple red, deep crimson, hot pink, neon purple, jungle peach, Persian melon, baby berry? You name it, baby. The MAC and Revlon counters at Sephora must be experiencing Depression Era shortages. I wonder: what’s behind this trend? ‘The Lipstick Effect’, the tired old theory that lipstick sales increase during times of economic recession because women want to attract financially stable men, is lazy and paternalistic. The female psyche is much too complex.

The documented history of lipstick traces itself back to Queen Schub-ad, an ancient Sumerian queen who colored her lips with a crude base of white lead and crushed red rocks, and the practice soon caught on with the neighboring Assyrians. In ancient Egypt, fashionable men and women of power used eye cosmetics and lip paint (usually colored with red ochre), to denote their high social status. Orange, magenta, and blue-black enjoyed popularity, but red retained its throne, the lips of the aristocracy dyed with the laked pigment of Kermes carmine.

But after the fall of Egyptian culture and the rise of the Greek and Roman empires, painted lips became the domain of ladies of the nights rather than royalty.

“It was in this context of lipstick signaling prostitution that the first known formal regulation of lipstick arose,” writes Sarah Schaffer in a brilliant 2006 Harvard essay entitled Reading Our Lips: The History of Lipstick Regulation in Western Seats of Power. “In what would become a prominent pattern in lipstick regulation, this first lipstick law focused on lipstick’s potential deception of men and undermining of class divides rather than on its safety for women. Under Greek law, prostitutes who appeared in public either at the wrong hours or without their designated lip paint and other makeup could be punished for improperly posing as ladies.” Schaffer goes on: “Not until the start of the Middle Ages, actually, did religious criticism of lipstick finally gain widespread hold in some countries, most notably England,” although “applying a lily or rose tint to one’s lips remained permissible based on those colors’ connotation with purity.”

In 21st century New York City, bright lipstick has become the protagonist in twentysomethings’ coming-of-age-narrative. Liberated for the first time from the watchful eyes of her parents and the clucking of her elders, she is openly asserting her independence and expressing her fashion sense and newfound sexuality. She’s graduating from college. She’s starting her first job. She’s paying her own rent, buying her own clothes, and choosing her own company. She’s having her first romances and flings. Last year, she was living with family in Kansas or Ohio or Rochester; now she’s living in studios and lofts in Soho or Inwood or Washington Heights. She’s listening to St. Vincent instead of Taylor Swift. She’s reading Nasty Gal instead of Seventeen. There’s something brazen and defiant about her lipstick, as if saying, “Look at me, buddy.” She is daring you to notice her, but pretend you didn’t. If bright red lips once signified a prostitute, the postmodern city girl doesn’t care.

But this transition from blossoming girlhood to ripe womanhood seems awkward, and the rite of passage of smearing once-virginal lips seems rushed and over-applied. The bloom is too early. Struggling to shed the Madonna-whore complex, the fit in the mirror is off. Trying to channel vintage 50s pin-ups and classic fashion icons, the result achieved often more resembles Japanese geishas than Elizabeth Taylor or Marilyn Monroe. Prowling the glittery streets of Manhattan in Alexander Wang and Michael Kors, she is mimicking what she thinks sophisticated, cosmopolitan women in New York look and act like, but she is still a babe in the woods. In that little metal tube of wax, oils, and emollients, she wields a dangerous weapon with which she hasn’t had much previous experience or training. Loose lips may sink ships, but red lips break hearts.

Even in charming little French cafes in Tribeca.