In the middle of winter, I lost a diamond earring. My mother had gifted these to me only a week earlier, and at first I was distraught, retracing my steps for over an hour in the dark. How had the built-in safety clasp failed? The only way to deal with this episode of ‘bad luck’ was to focus on a positive. I’d like to think that someone homeless walked down the road the next day and noticed it shimmering against the ice. Maybe they pawned the earring and could afford the hostel. Maybe they thought it was their ‘lucky’ day.

The truth is, we’re not at the mercy of a terrifying universe of swirling chaos. Even the study of chaos theory seeks to give order to seemingly random events. The person who found the diamond would have had to be open to the possibility that there might be something precious where it wouldn’t normally be expected, and this maximising of chance opportunities is the first step to being lucky, according to Dr Richard Wiseman who devoted ten years to a study to determine the nature of luck, published in The Luck Factor: The Scientific Study of the Lucky Mind. He found that people who considered themselves lucky were actually skilled at noticing, creating and acting upon opportunities. Lucky people get dolled up and go to parties, they network shamelessly and, interestingly, they smile twice as much as people who consider themselves unlucky. 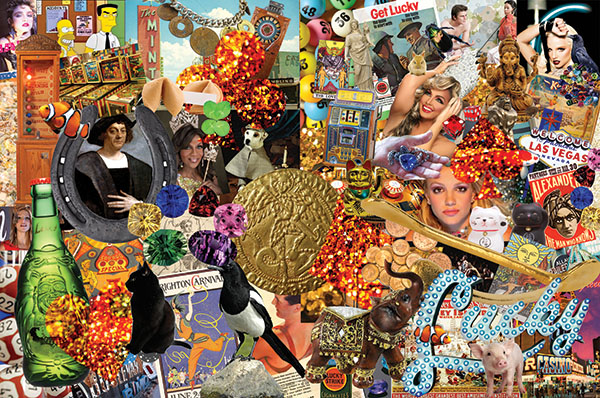 The second step is listening to lucky hunches. Don’t fight your intuition, it’s based in the real neuroscience of pre-emptive perception. Your subconscious (thought to somewhere in the parietal lobe, if you’re interested) is hardwired to make decisions in your best interest every day. Stress and anxiety are killers of intuition, so clear your mind, run yourself a bubble bath, meditate, and learn to let go. These cultivate a curious mind. As Sir Alexander Fleming peered into a petri dish at a lump of mould that resisted bacteria, instead of chucking it in the bin, he investigated it and discovered penicillin. Clarence Birdseye noticed that people in Canada kept fish fresh by packing them in ice. So he added packaging and branding and pretty much invented the frozen food industry.

The third step to being lucky, according to Wiseman, is the expectation of luck. It’s called the Pygmalion Effect: you get what you expect, and lucky people expect a future full of good fortune. These expectations then become self-fulfilling prophecies. Young Wiseman probably grew up believing he was a smart kid and expected a career in academia.

The fourth step is turning bad luck to good. I started PHOENIX after an acrimonious split with a publisher I was previously editing for. At the time my world was in disarray, but with the support of friends, family and a loyal team, we cobbled together what content we had and created a new publication risen from the ashes. There’s scarcely a self-made millionaire out there who hasn’t been boom and bust several times. MC Hammer, at the height of his ‘untouchable’ (if you’ll excuse the pun) fame in the 80s was worth over $30m. He spanked it all, plus another $10m on fast cars and a staff of 200, filing for bankruptcy in 1997. He reinvented himself as an entrepreneur and now has a portfolio that includes tech start-ups, athlete management, and social media lecturing at Harvard. Those loon pants must have something about them.

So knock on wood (to call upon the help of pagan tree Gods), nail a horseshoe to the door (the shape mirrors a Celtic crescent moon that will ward off the evil eye), or as humourist R. E. Shay remarked, “Depend on the rabbit’s foot if you will, but remember it didn’t work for the rabbit.” I for one have made the following resolutions: to spend 20 minutes each day flicking through emails I wouldn’t normally open (I’ve already found a new photographer whose crime was a boring subject line), attempt to curb my typically London misanthropic tendencies and smile more at strangers, and visualise a colour before I go to an event, then instigate conversation with people wearing that colour. Wish me luck!