Opinion | Should Feminism Be Fashionable?

On 29th October 2014 Harriet Harman tweeted: “This is what a feminist will look like at Prime Minister’s Questions today @ELLEUK @fawcettsociety #ellefeminism“.  She then proceeded to sit in the House of Commons clad in the pro-feminist T-shirt, silently rubbing it in David Cameron’s face – well, not literally, although that would be a sight to see… Ed Miliband and Nick Clegg have also joined in the fun, posing in the T-shirts (which were made by Whistles for the Fawcett Society)  for ELLE, sensitively gazing into the distance. Is that what a feminist looks like? What I really want to know is: is this  t-shirt  what feminism looks like? 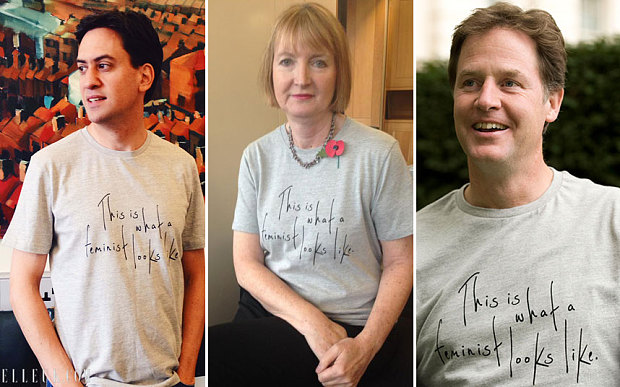 Let’s get something straight: feminism is so hot right now. Just take a look at Chanel’s SS15 catwalk show: a small army of leggy models storming down a makeshift street brandishing signs that proclaim: ‘HISTORY IS HER STORY and ‘LADIES FIRST’, with good old Karl coolly padding alongside. How about all the celebrity endorsement? Emma Watson’s He For She speech at the UN was a hit,  supported by the likes of Douglas Booth and Joseph Gordon Levitt. YouTube views currently stand at  1,483,145. Celebrities can barely escape an interview without being asked whether they are a ‘feminist’ or not. The list goes on.

Don’t get me wrong: all these things in themselves are amazing, wonderful and brilliant. Feminism ought to be an openly accepted and talked about idea – but should it be fashionable? I’m not so sure.

If feminism becomes a fad, it runs the risk of getting sucked into a multi-brand production line, popping out at the other end plastered all over frilly pants, iPhone cases and even DIY kits. Will ‘sexy feminist’ appear alongside ‘pirate wench’ and ‘naughty schoolgirl’ at the local fancy dress shop? Will high-street versions of Chanel’s protest signs be sold in Primark for a quid, next to ‘burn-effect’ padded bras? 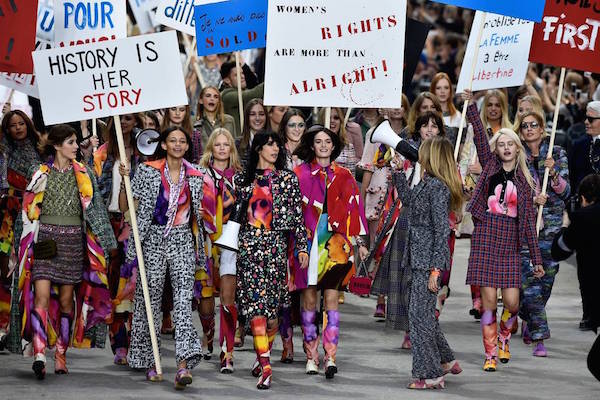 Ok, so maybe I’m getting ahead of myself slightly, but think about this for a second: does such a historically significant, global movement really need to be bottled, beautified and babe-ified to make its way in the world? Doesn’t that contradict the principles of feminism itself?

Girls  writer Lena Dunham recently said the following, in response to a question about feminism, fashion and celebrity: “It’s definitely modern, but if feminism has to become a brand in order to fully engulf our culture and make change, I’m not complaining.” Maybe Dunham is right – maybe I need to swallow my pride and be happy that feminism is being discussed and aired to such a degree. I just hope it doesn’t lose its power in the process.

What does a feminist look like? If you ask me, she should look however she wants to look – the packaging is irrelevant. But one thing is certain: you shouldn’t need an ‘it’ T-shirt to prove the F word’s worth.