Whiplash Will Leave You Bruised (But In A Good Way) 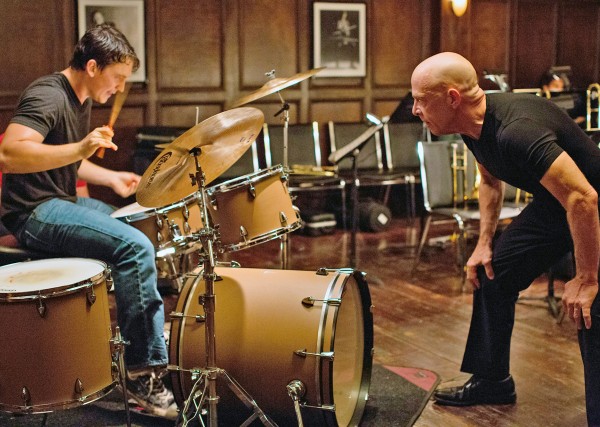 The mentor / pupil dynamic is the cornerstone of many a hoary filmic plot, as benign and charismatic teachers inspire their young charges to seize the day, defy the naysayers, strive for greatness and be all they can be. Who can forget the dewy-eyed gentleness of Mr Chips, the pullulating pronouncements of John Keating, the inner-city bully-bashing of LouAnne Johnson?

Whiplash is not that story. Whiplash is mean. Whiplash is hard. Whiplash hits you like a 7,224 piece orchestra and leaves you in a bewildered and bruised heap at the door, not entirely sure what you just experienced. Whiplash is about what it means to really aspire for greatness, about the lengths the truly, deeply ambitious will go to reach their dreams, and the kind of people who will either help you get there or tear you apart on your way.

Andrew Neiman (Miles Teller – captivatingly arrogant) is a first year student at the prestigious Schaffer Conservatory in New York, warming a seat in a low-level and friendly ensemble and spending his evenings in solitude, frenetically pounding away in the Conservatory’s practice rooms. He soon attracts the attentions of the Conservatory’s big swinging tuba, Terrence Fletcher (JK Simmons – extraordinary), a curt, acid-tongued and intimidating instructor who quickly elevates him to the school’s alpha orchestra and within spitting distance of serious musical credibility in the dog-eat-dog world of New York music.

But Fletcher is no genteel Mr Holland – he’s a coiled spring of barely repressed violence and cruelty, ready to lash out, cut deep and crush aspirations in the pursuit of greatness.

The core of Whiplash is a colliding, discordant and ambiguous duet between these two characters – Fletcher using his power and position to bring Neiman to breaking point, Neiman refusing to be broken as he tears his life apart to drum to Fletcher’s beat and fulfill the potential he is absolutely sure he has inside him. From the start, the film’s beat is oppressive and alienating, mirroring the state of mind of its young hero, and as the tempo rises and the antagonism between the protagonists reaches its feverish crescendo the camera swirls nervously and constantly between the characters, as if searching for where the breaking point might lie.

It’s extraordinary that a film of such power and kinetic energy was crafted by a second-time director, Damien Chazelle, who has just turned 30 and manages to imbue his film with a sense of both passion and dread that should be the purview of someone twice his age and experience. The tenebrous rooms, the stalking monster, the mental and physical torture, the blood-drenched sticks – Whiplash is the pursuit of the American dream rewritten as devastating psychological horror.

But even the out-and-out emotional brutality is ambiguous, and while Whiplash goes down its darkest avenues there’s always a sense that somehow this all makes sense, that these horrors are such things as dreams are made on. It’s testament to both Chazelle’s assured direction and the astonishing performances of the two leads (JK Simmons transformed from comic-book bellower to a throb-veined musical Voldemort, stalking in front of his petrified pupils like a flared cobra) that neither disappear out of the realms of the recognisable and that their damaging, symbiotic relationship develops, twists and recreates itself as something both deeply disturbing and utterly thrilling.

With Whiplash, Chazelle has managed with supreme confidence to give his audience an idea of what it must be like to live on a knife edge, with wild and inconceivable success on the one side and bland ignominy on the other. Every drumbeat could be a life-changer, every person could be a rival poised to steal your legacy, every broken blister could be a step closer to immortality. As the film climaxes in an orgasmic, ambiguous crash of percussion despite all the horror, all the pain and humiliation, it was a path worth taking and they were sacrifices worth making. Great job guys, great job.