It feels like a very long time since we caught up with Hannah, Marnie, Shoshannah and Jessa, the haphazard twenty-somethings on meandering pathways towards employment and adult life in New York. After the emotionally draining climax of season two – yes, Marnie and Charlie finally confessed their love for each other, but Shoshannah experienced her first heartbreak and Hannah went through a bout of O.C.D. that saw her conduct a disastrous DIY YouTube haircut – the premiere of season three, ‘Females Only’, was contrastingly heartwarming, refreshing and funny.

Girls has often received criticism for being a show about white girls complaining about ‘white girls’ problems’, but Lena Dunham – writer, producer, star – is unapologetic. She is writing life as she knows it. She has earned the respect of the New York creative scene and a devoted international fan base. She currently has over one million followers on Twitter and magazine articles dedicated to her Instagram feed, and she landed her first Vogue US cover in February. For once, the term ‘zeitgeist’ seems truly appropriate. But with such a heavy weight of expectation now developed around the show, is Dunham still nimble enough to evolve?

In the ten months that have passed, Hannah has been on medication. We see her with Adam, who presses a pill to her tongue as part of their loving morning routine and lovingly checks she has swallowed it. As our favourite dysfunctional couple sit in happy silence, slapping each other with noisy kisses and bickering affectionately, we encounter a vision of domestic bliss that is a far cry from the vicissitudes of seasons one and two.

But the old Adam, that topless antihero who spent most of his time in a grimy apartment engaged in aggressive carpentry or urinating on his on-off girlfriend, is not fully forgotten. Before the title credits of the first episode even role, Adam visits Hannah in Grumpy’s, where she now works, only to be confronted by his ex, Natalia. Natalia rails at Adam, shrieking about his abrupt departure and bizarre sexual practices. When she catches sight of Hannah – “Did you leave in a rush?” – she asks if she truly knows what she has on her hands: a sexually depraved sociopath.

The topic of sexual intimacy and sexual practice is one of Dunham’s favourites. Adam urinated on Hannah from an impulse; with Natalia he made consistent, extreme bedroom requests and her consent was often ambiguous. It was excruciating to watch a woman so out of her comfort zone, and Dunham often traverses a very fine line between her female characters’ control and consent, and their downright submission to unreasonable men.

Sex is a huge part of Girls, a frank discussion which Dunham conducts both through Hannah’s relationships with men, and her relationship with her own body. Onscreen, Dunham is as often naked as she is clothed. Pear-shaped, with soft flesh spilling out of deliberately too-tight clothes, Hannah is seen clubbing in a mesh top without a bra, slopping in the bath, engaged in a variety of vivid sex scenes. It was the show’s original defining shock tactic, for which Dunham initially received the most criticism. “My response is,” the actress retorted, “get used to it because I am going to live to be 100, and I am going to show my thighs every day till I die.” She claims to use Girls to present “a more complicated range of bodies in women and men, [that] would be something of a conversation starter.” And so it has been.

So much of Dunham’s writing feels like a social experiment. When the first season of Girls aired in 2012, immediate comparisons were made with Sex and the City. The character types are recognisable: the neurotic, narcissistic writer, the uptight professional, the unpredictable sexually liberated hippy and the naive optimist. But what Dunham has set out to do is entirely different. Whereas SATC was aspirational and escapist (we all longed to trot into Dolce & Gabbana and buy feathered sandals after a bad day at work), Girls lays bare the all-too-real challenges of quasi-employment and dwindling finances for the newly graduated in The New York, whilst simultaneously exploring the extent to which women, in an uncertain period of their lives, perversely enjoy being treated badly by men.

But there are no victims here. Dunham’s characters are fully realised individuals in a way that their glamorous forerunners so often failed to be. They are selfish, often unlikeable and incredibly self-absorbed. Whilst Shoshannah dwells in a (frequently deluded) bubble of self-help hopefulness, Hannah, Marnie and Jessa are actively willful, mean and egocentric. This is beautifully illustrated at a dinner party in Hannah’s apartment. Shoshannah declares that in her senior year of school she is alternating “nights of sexual freedom with nights of academic focus” and will be a fully rounded woman by the end of school. Marnie bemoans the fact that Charlie has suddenly left her, to which Hannah responds, “She’s going through a break-up. We don’t need to talk right now about my greatest creative achievement.” (The first chapter of her book, commissioned at the end of season two, is finally due for online publication.)

Jessa, the abandoned and the abandoner, is elsewhere. After her whirlwind marriage/divorce and subsequent disappearance, she has wound up in rehab, from which she manages, through sexually volatile behaviour, to be expelled. (The rehab stint includes a disastrously cringe-worthy appearance from Richard E. Grant. A fellow inmate of the rehab centre, his role towards Jessa is dubiously paternal and pervy. “Babe,” he smarms, “we all have daddy problems.”)

The girls’ self-obsession is often difficult to swallow. After a late-night call from Jessa demanding to be retrieved from rehab, Adam drives Hannah and Shoshannah to pick her up. Episode two, ‘Truth or Dare’, chronicles the road trip (rockabilly radio station, big skies and all), which Hannah complains is “unremarkable.” Having hoped to gather material for her book, crushed against a rocking chair which Shoshannah has bought as a souvenir, she says she has no room to express herself. Adam abandons Hannah in the woods when she refuses to hike with him – “It’s liberating to say no to shit you hate” – and they later discover her lying in the autumnal dirt with her skirt pulled up, listening to ‘This American Life’ on her phone. It is a beautiful shot, encapsulating all the simultaneous disgust and delight that Girls so often evokes.

Here again the frequently execrable Adam tugs unexpectedly on our heartstrings.  Deep in the forest, he declares quietly to Shoshannah that Hannah is his “best friend”. Later in the episode, he consoles Marnie by telling her that is it possible to be with someone for a long time, to “know their middle name and what records they like”, but that “really knowing someone is something else, a completely different thing. And when is happens you won’t be able to miss it. You will be aware and you won’t hurt or be afraid.” For all the cynicism Dunham is, at heart, a great romantic, and these rare, sweet moments keep us hooked. 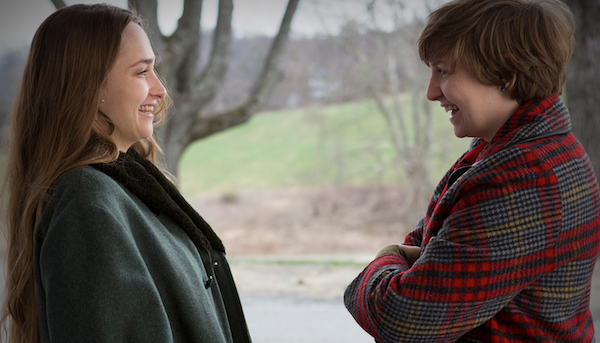 The theme of female friendship, another Dunham favourite, is  at times handled a little too heavily. Dunham has previously spoken of wishing to detail the “jealousy, posturing and anxiety” of the relationships between women, and her characters are as vicious and provocative to each other as they are affectionate. Adam, dumbfounded that Hannah would drop everything at a moment’s notice to retrieve Jessa, says, “Women get stuck in this vortex of jealousy and guilt with each other that keep them from seeing situations clearly.” Dunham’s point is that in friendship, you shouldn’t see situations clearly. She treats female friendship as a great romance of its own, partial to episodes of blindness and hot-headedness, and articulates it with alarming truthfulness. Greeting Jessa, Hannah’s anger spills out, ferocious and raw, before she simply begs her never to leave again. What’s the old saying? A girl’s first heartbreak is always about a girl.

For most of the season opener, however, the tone is hopeful. The girls are halfway towards getting their shit together: Hannah isn’t poking cue tips into her ears anymore, Shoshannah is sexually experimental and Jessa, finally, promises to stay. Despite her break-up, Marnie finally has a job and is moving into her own apartment, although her mother dubs it a “shit box.” We can look forward to future appearances from Felicity Jones, playing Richard E. Grant’s long-suffering daughter; Sonic Youth’s Kim Gordon as “Mindy Methface”; and J Crew creative director Jenna Lyons as Hannah’s new boss. And after Christopher Abbott’s sudden departure from the series, the possibilities open up for arguably the show’s most unlucky character, Marnie.

It was with her 2010 film Tiny Furniture that Dunham attracted the attention of Nora Ephron, the late American journalist and screenwriter (When Harry Met Sally). In the last year of her life, Ephron took Dunham under her wing and coached her; and in an elegiac piece in the New Yorker, Dunham affectionately remembered the life lessons she had learned from Nora, from the sublime to the ridiculous (“order several puddings, and take reasonable bites of each”). When Dunham pitched up to Ephron’s family’s Thanksgiving dinner with a batch of failed brownies, Ephron didn’t placate her, but said, “I feel that these brownies are destined for a moment in your show.” Something of Ephron’s tone and her humour is tangible in Dunham’s work. 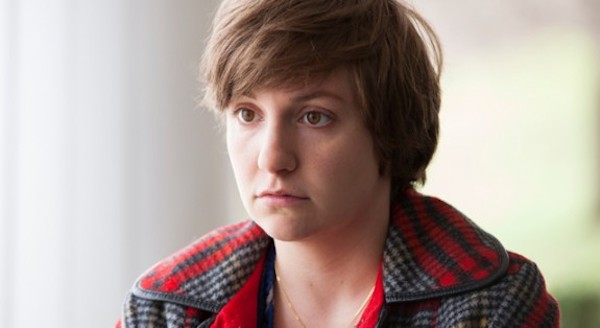 And that is much of what Girls is about: writing. Hannah, a creative writing graduate like Dunham, is a heavily autobiographical mouthpiece of what it is to have a voice, and how to use it. One of Hannah’s most interesting conundrums is how to negotiate her real experiences with the fictionalised versions of events she wishes to put in her book. Famous now is a scene in the first episode in which Hannah, high from opium tea, declares to her parents: “I could be the voice of the generation. Or, at least, a voice of a generation.”

There are blundering errors along the way, like Hannah’s diary in season one, disastrously read by the wrong pair of eyes, or the literary group, in season two, in which she reads aloud a piece of hastily-scrawled rubbish. Dunham’s characters are testing grounds, not always consistent and often cartoonish. Hannah’s body is a creative resource. Her writing is imperfect. But, like the girls themselves, so full of contradiction, vulnerability, confusion and beautiful chaos, it is that very imperfection that makes Girls such a triumph.