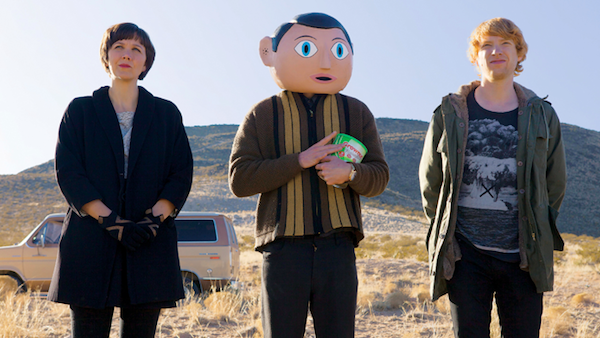 Sundance Film Festival, brainchild of the original Sundance Kid and annual home to the greats of the independent film industry descended upon London as an idyllic and far-reaching cloud of revelry, enveloping everything in its fuzzy candyfloss folds. Sundance London always evokes good feelings. It’s a thumbs up to the films that document the strangely ordinary, the horribly thrilling and the downright odd within the UK. Sundance has a long and lauded history of subverting genres as we traditionally recognise them. Spooks and surprises are rife and inevitably, never fail to leave viewers with that warm glow. This year, of course, with it’s choicely smorgasbord of fresh talent and excellent writing, panels, music, hysterical laughs and deep insights, was no exception.

Sundance wouldn’t be Sundance without a dose of the wry and peculiar from notable talent. Frank, a winning black comedy starring Michael Fassbender and Maggie Gyllenhaal premiered on the festival’s opening night and had viewers in stitches. Documenting the life and times of a band seeking to make the big-time and connect with their fans, led by a tortured frontman in a giant puppet head, that’s right, a giant puppet head, Frank is a deadpan riot. Lenny Abrahamson, speaking about the process of creating the movie in a short Q&A, apprised a relieved audience, “Michael didn’t do a Daniel Day Lewis and keep the head on all the time. He’s not that method.” Sharing its name with the perplexing lead singer, this film’s pithy one-liners and matter-of-fact eccentricity make it a joy to behold. It hits UK cinemas this month and comes highly recommended.

Our second US indie pick, from a name we all undoubtedly know and love, is the directorial debut of Rose McGowan, perhaps more recognisable as Paige Matthews of epic witchy drama series Charmed; the show that surely has earned a special foothold in the hearts of 90’s teens forever. The short follows Dawn, a teenage girl whose naïve ideals of romance catapult her into an unbridled situation that escalates with disquieting intensity. The film considers girl culture in 1961, something that McGowan seems particularly committed to conveying both accurately and sincerely. In this gothic-style short, Dawn’s internal voice of reason is blindsided by false idols and oppressed by the bizarre ideals of masculinity and gender roles instilled by her mother and the culture that surrounds her. Consequently we see what happens when a 15 year old explores the ideals that society has spoon-fed her from infancy as she heads down an ominous path of no return.