PHOENIX Meets Ginger And The Ghost

PHOENIX met Missy and Daniel, AKA Ginger and the Ghost – the visual artist duo-turned-music-makers from Sydney – for coffee on a glorious afternoon in sunny Shoreditch. We chatted about everything from recording in water tanks in the Australian bush and secret styling tips, to the creative inspirations behind their wild live shows and magical video clips. Intrigued? Read on… 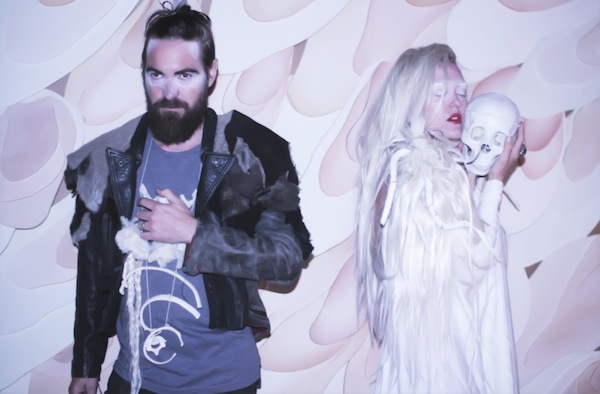 What inspires Ginger and the Ghost’s aesthetic?

Missy: I come up with a vision and do a heap of research but always come back to cult films like The Neverending Story, Labyrinth and The Dark Crystal. I base a lot around fantasy films and dramatic couture fashion brands like McQueen and Cavalli. In terms of the sets, I love working with paper so for The Mark Of Hearts video the whole set was made of paper weeping willows. We love it to be textural and abstract.

Why is creating your own universe so important to you?

Daniel: We’re open to other using other people’s universes but it’s easier for us. Within someone’s head is their own complete version of how they feel about a song and we can actualise that. It’s more than a musical act, we call it a project.

Missy: Daniel and I have both been in different parts of the creative scene. We’ve both done a lot of fashion installations for windows, events, props and set design. Sometimes I style costumes and we’ve also created a business called I Made This. It’s been amazing doing Ginger and the Ghost because we’re able to transfer our skill sets into our vision. We also use our friend’s talents to co-produce or style a film clip. It’s organic and totally amazing to have control of all the elements. Big budget projects can loose that maker’s aesthetic and I think that our stuff has a raw and rough feel to it. We like thinks to look like they’re handcrafted instead of being really polished.

Daniel: That way things can evolve spontaneously and aren’t rigidly contained within a structure.

Any wild plans for the summer?

Daniel: We’re at a balance between recording new material and playing festivals. We’ve just played a boutique festival which was unreal. Then we’re heading to Portugal and Spain to play more.

Missy: We’re lucky enough to be a part of APRA Song Hubs which is an Australian industry company that pairs Australian bands with producers in London, so we’ve had the opportunity to write a track a day with five different producers and a collaborative tracks with other artists. Then we’ll release another single in September and then a European tour in February or March.

Where do you hang out and generate new ideas?

Missy: We’ve got a creative co-op in Syndey called The Nest which houses about 13 different designers, artists and brands. We have all our stuff in there. It’s the workshop, home, yoga studio; whatever you want it to be. Other than that we’ll go to the beach.

How do we nail the Ginger and the Ghost look?

Daniel: We’ve just been given some great stuff from Dent De Man. They’re a beautiful menswear brand who have given us some stuff for the tour; they’re amazing guys.

Missy: Makers of Belief are friends of ours that customise garments for us. Discount Universe is another Australian label that we love and Desert Designs, they’re the best.