Peter Jackson’s Trilogy Is Just Too Big For Hobbits 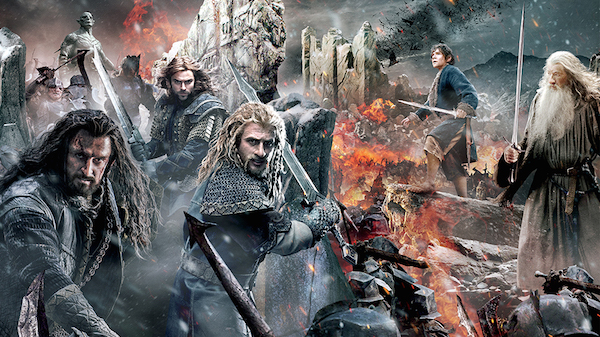 Like butter scraped over too much bread, Sir Peter Jackson’s patience-testing second Middle Earth trilogy comes to its predictable whizz-bang conclusion with The Battle of the Five Armies, touted by its blinkered marketeers as the “defining chapter” of all that has come before it. This, presumably, is either a joke or a slogan magicked under the influence of copious hits of bamboozling pipeweed.

Jackson’s triumphant, awe-inspiring Lord of the Rings trilogy will probably be his greatest achievement, and certainly one of the greatest Pyrrhic victories in movie history. With such a cinematic wonder in his rear-view mirror, it is no surprise that he tried to replicate the sense of scope, threat and excitement that those films elicited without fail every Christmas, but using a source novel a fraction of the size and with a fraction of the resonance. It was always a recipe for failure, grand though that failure might be.

The beats are familiar, but the stakes are so much lower and the colours so much paler. Compared to the personality-filled Fellowship, the journeying dwarves are bereft of individuality, character or interest, making it nigh-on impossible to care about their fates. Compared to the regal, charismatic Aragorn, Luke Evan’s Bard the Bowman is underdrawn and under-served. And compared to the cataclysmic, world-ending dangers of the Battle of Pelennor Fields, the Battle of the Five Armies feels like a Black Friday skirmish over a low-brand plasma screen.

It’s inevitable that despite the massive, and frequently impressive, expansion of the novel’s scope, the biggest loser is the title character himself. Bilbo pays a mostly tangential role throughout, though particularly in The Battle of the Five Armies, in which he is off-screen for most of the film and ineffectual when the protagonist. Jackson’s roving camera prefers the computer-game hijinks of Bloom’s gymnastic elf Legolas, drafted in to provide an anchor-point for bemused LOTR obsessives, and the bulldog-faced grumps of lead dwarf Thorin Oakenshield. But Legolas is bland in the absence of his LOTR Chuckle-Brother Gimli, while Oakenshield has basically been a mardy and irritating tosser throughout, leaving a void at this series’ heart which is never filled.

There are moments of great spectacle and soaring craftsmanship in The Battle of the Five Armies – Smaug raining down a holocaust on Laketown and a dizzying supernatural fight involving some welcome old faces, while the effort that has again gone into creating Middle Earth is astounding in its detail.

It’s just a shame that Jackson chose to chase past glories and follow the route well-travelled instead of crafting something more intimate, more low-key and more in keeping with the source. That could have pulled this trilogy out from the shadow of its towering predecessor and made it something truly special, rather than just serving to make you wish you were watching Lord of the Rings instead.