Paddington Brings The Best Of British To Christmas 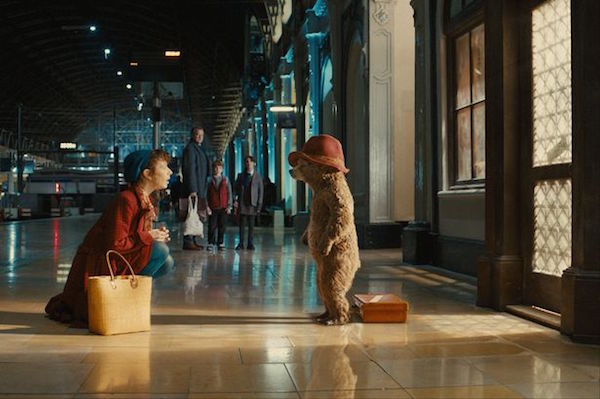 A feral immigrant travels to the UK illegally, smuggling potentially banned foodstuffs in his clothing. Heading straight to a major London transport interchange, he ensconces himself, encourages verminous pigeons, and hassles harried passers-by in the hope of securing a free home and living support courtesy of the hard-working British tax-payer.

UKIP’s film magazine (were it to exist) would probably not make much of Paul King’s paean to English kindness, generosity of spirit and family, all presented in the guise of a kid’s film about a talking bear. Its sequences of warmth, tolerance, joy and excitement would likely be denigrated as propaganda from a left-wing establishment trying to blind the next generation to the dangers of unfettered immigration with an overdose of sugary schmaltz.

Well bah humbug to that nonsense – Paddington is an unadulterated festive delight from start to finish. There were warning signs along the way – Colin Firth “consciously uncoupling” from the bear earlier in the year; early CGI glimpses that inflamed Michael Bond purists, demanding a more cuddly, less ursine creation; and a trailer that put the emphasis on slapstick and destructive japes, more reminiscent of low-level Robert Rodriguez than classic British culture.

Happily, Paddington’s national treasure status is unbesmirched in his first big-screen outing, and he’s as thoughtful, caring, lost, beguiling and artless as you would hope. His exploits as he comes to terms with life in London are both hilarious (an extended, farcical piece of bathroom silliness is priceless physical comedy) and touching (the city’s occasionally grinding unfriendliness is starkly presented).

The animation is far less jarring than feared – it’s helpful that talking, child-size spectacled bears have been so underrepresented on screen, leaving little in comparison – and the bear feels a real, physical presence in every scene he’s in. Ben Wishaw’s voice commands exactly the right level of self-belief and adventurousness to cement a personality without drowning out what, and who, is going on around him.

And there’s kudos for the most functionally dysfunctional family since Mary Poppins. Hugh Bonneville, drafted in to remind Americans how uncomfortable with change the Brits have been through history, does his usual business, while Sally Hawkins is utterly divine as the kind of quirky, arty, befuddled and loving wife who probably only exists in cuddly British family films. The kids are sweet (with the most amazingly designed bedrooms) and Nicole Kidman, drafted in to remind Americans that the Yanks can be villains too, channels Cruella De Vil meets Anna Wintour as the man-eating taxidermist with an eye for a good stuffing.

The beats in Paddington are familiar – a fuzzy stranger enters a family home and teaches everyone how to love and laugh – but, like ET, a light sprinkling of movie magic elevates it far beyond the norms. Delicate flights of imagination, like the tree mural on the Brown family’s staircase blooming and waning with the filmic mood, or the wonderfully Caractacan storage system at the Explorers Guild, draw out a sense of joy that is rarely found in today’s slap-dash kids films, intent on numbing minds and selling tie-ins.

And the message (for there must be one) – of age-old British compassion and kindness, of re-finding our national heart and spirt of adventure, of remembering our shared history and jettisoning any strange, malingering antipathy towards helping those in need – is one that will stick in the craw of the misanthropes and miseries, but one which we can but hope finds a secure home in the children who will adore Paddington for the rest of their lives.

What a lovely Christmas gift.