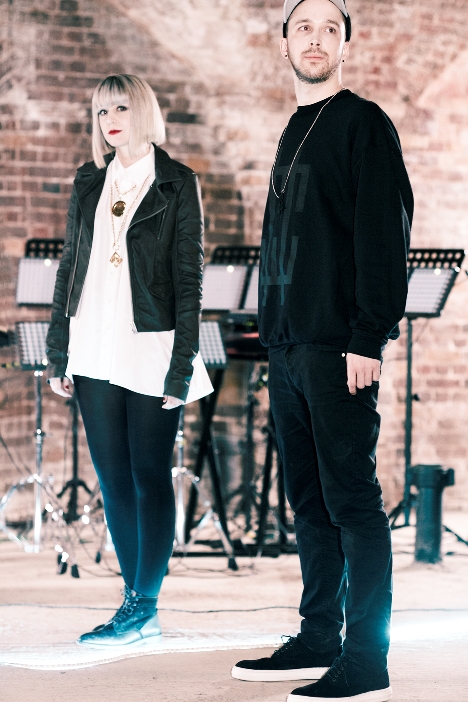 Electro-pop duo Avec Sans emerged onto the London scene early last year, when Crack in the Road picked up their cover of Bon Iver’s ‘Perth’ only an hour after it was posted on their site. Since then they’ve garnered increasing support from music blogs and critics alike with their dark synth-pop and beautifully crafted electro melodies. PHOENIX’s Maisie Skidmore caught up with the pair in an East London underground Victorian prison whilst filming a video to debut the shoe they have designed as part of London based footwear brand SWEAR’s SWEAR by Music collection; a limited edition capsule collection designed by five of the scene’s most dynamic brands. The shoes are available to buy on farfetch now.

‘It means With Without in French’, Alice Fox explains to me of the band’s name. ‘It’s the idea that usually the focus of a song is either the presence or the absence of something.’ It might initially seem a puzzling concept to some, but the interplay between presence and absence forms a dichotomy which runs theme-like throughout Avec Sans’ music, in which Jack St. James’ defiant synth underpins Alice Fox’s haunting vocals. We sat down to talk about their dark aesthetic influences, the laptop-controlled lightshow which accompanies their performance and their restyling of the classic brogue boot for SWEAR by Music.

Let’s start at the beginning, how did you two come to start playing music together?

Jack: We were both previously in bands making different sorts of music and both of our acts had come to a natural end, so we were working on individual projects and trying to find our way. I was looking for somebody to sing, Alice was looking for someone to collaborate with. We knew each other through mutual friends and we’d seen each other at a lot of gigs, and it was only when a friend of ours said, ‘well, why don’t you guys try to write together?’ that we came together.

You both came from quite a breadth of projects musically. What drew you to electronic music?

J: I think it’s the fact that you can do so much with it, there are limitless possibilities. It’s not a slight on guitar bands, but a guitar can only make a certain number of noises. We spent ages finding our sound and playing together. I liked the fact that I could create everything that was in my mind in one place. There were no limits.

What influences do you draw upon?

J: And production-wise, people like Moderat/Apparat – all sorts of things. I think it’s difficult to say what your influences are these days, because it’s not like you love a band, so you buy all their albums. It’s more like, you can pick and choose. You can go onto Spotify and make a playlist, and that’s what you listen to, or you go onto Hype Machine and you discover new music all the time. It’s more a case of us taking influence from what we’re hearing all the time, rather than this band, that producer, and I think that’s really great.

Do you find that there’s a mixed media aspect to it as well? That literature, art and film tend to feed into what you’re doing musically?

A: Definitely. I studied literature, actually, and I also got into art school, so it was a toss up as to which one I would do, but I was always doing music alongside. We’re both influenced a lot by film. I think often we are as inspired by a visual, or by a film’s aesthetics, as by another sound.

J: There are occasions when there are songs actually written about a movie. It’s kind of like taking that feeling you get from a movie and trying to translate it into a song, and visually, that’s what we’re all about. That’s why we’ve got all the lights and the launchpads – we’d made a lot of the music, and I was thinking, ‘okay, how am I going to actually perform this now?’ When I look at a live electronic artist, I’m certain that what they’re doing onstage is incredible, because the sounds are so complex, but I can’t see it, you look at artists and they’re just stood behind a table. I wanted to be like ‘well, how can I try and show people what I’m doing?’ So I found these things called launchpads that emitted lights, and I bought one and found out how it all worked and I figured out a way of semi-hacking them, so that I tell them when and how to light up. It has to be an immersive experience.

Tell me about the shoes that you’ve designed for the SWEAR collection.

A: Well, we like to keep things fairly simple, but add something of interest. I wanted a classic shaped brogue boot, and I’m Alice Fox, so we’ve got a stylized fox head stamped into the broguing on the front. Instead of the brogue’s traditional circular punching, we’ve got triangular punching, and then the metal around the toe and the heel. We’ve got this beautiful black finish too, I really like the two tones – both are in black, but we’ve got the suede against the leather. It’s nice because now we’ll take the fox design from the shoe and use that elsewhere.

What’s coming up next for you?

A: We’ve only just stepped out of the studio, so we’re going to start building up live. We’re playing a gig at The Nest in Dalston on Friday 31st July

The SWEAR by Music collection is available on www.farfetch.com now.