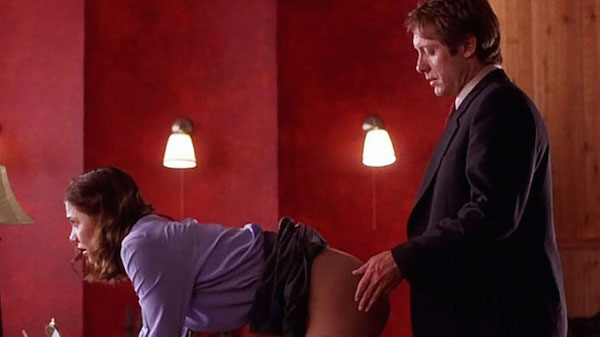 There’s no denying that nosing around unusual and under-represented sexual predilections is commercial catnip – not least considering the psychology of dominant / submissive role-play, the effect of normative socially-constructed barriers to freedom of physical expression, and a Freudian drive towards destruction.

It’s not as though sado-masochism flies under the radar in Western culture either – just check out the high street window of Anne Summers, the average perfume ad, or the mis en scene of the marvellous Lady Gaga circus. There’s clearly both a tacit cultural acceptance of the S&M world and an interest in its parameters.

Hollywood has touched on these areas before – in 1986, Adrian Lyne’s glossy and shallow Nine ½ Weeks portrayed an intense relationship based on dominance and role-play mostly remembered for its music video visuals and slightly repulsive food-play. In 1992, Paul Verhoeven’s trashy cause célèbre Basic Instinct equated bondage, bisexuality and blonde bombshells with ice-pick slaughters, provoking uproar and multi-million ticket sales, while a year later the execrable Body of Evidence saw Madonna pouring boiling wax onto a bemused Willem Dafoe, driving him to a frenzy of handcuff-enhanced lust.

All deeply silly, all deeply unerotic.

Happily, Steven Shainberg’s indie critical hit Secretary came along in 2002 with sensitive performances from shameless James Spader and wide-eyed Maggie Gyllenhaal, managing quite remarkably to be sexy, witty and insightful all at once. But that film was more interested in psychology than physicality, and its office-based shenanigans played for mockery-free levity, leaving those with an intellectual (and, indeed, physical) interest in the practicalities somewhat frustrated.

It was not to be. The much-reported on-set clashes between the director and author E. L. James hinted that something much more surprising and idiosyncratic was in the offing, but this promise has been shot down in the interests of delivering a tedious, colourless and mostly painless Mills and Boon–style fantasy that utterly devalues the talents of the director, its game and charming star Dakota Johnson, and the potential for true revelation.

The film side-steps repercussions and controversy at every turn, steadfast in its refusal to reveal anything but the cursory and the clichéd (the coy camera equally terrified of showing the naked horror of a penis and Johnson’s ravaged buttocks after a vicious whipping), while the script is so mundane as to sap away any interest in what is, inherently, a fascinating topic with the dumb power of its impotent idiocy.

I didn’t hate 50 Shades of Grey. It’s competently directed and acted, it looks good and Danny Elfman has written an impressively over-portentous score. But it is as it says on the tin: grey, vanilla, deeply unaffecting. Sex does, indeed, sell as it ever has, though we’ve definitely been short-changed with this deeply unedifying nonsense.