Documentary | Christmas In A Day

At this time of year, with the consumer melee in full throttle – people stampeding over each other to get the best December deals on the high street, magazines (including us) luring you in with mouth-watering gift-buying features, and every shop in the country releasing hard-sell TV ads masquerading as soft-focus fantasies – taking a moment to soak up what truly makes Christmas magical isn’t always easy. 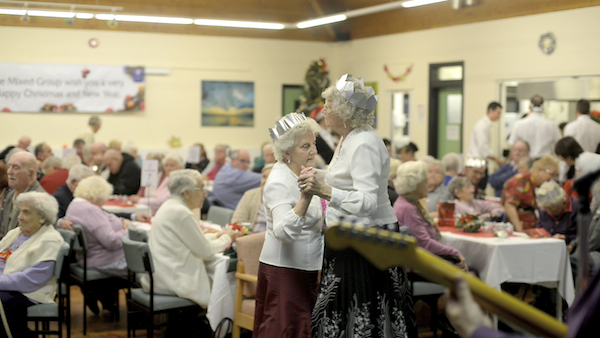 Thank heavens for Oscar winning director Kevin MacDonald, whose latest documentary, Christmas In A Day, builds on his widely acclaimed, crowd-sourced 2011 film Life In A Day to examine what makes a British Christmas Merry. In doing so, he reveals a collage of moments that may restore a little of your faith in an our over-commercialised holiday.

In 2012, a broad cross-section of the British public were asked to film their customary Christmas rituals and submit their efforts. The response was impressive: over 360 hours of footage was submitted across smartphones, tablets and digital cameras, which MacDonald has distilled down to a powerful 50 minute short.

Starting on Christmas Eve, we’re introduced to a cacophony of children preparing for Santa’s visit; banging in the ‘Stop here Santa!’ signs, leaving out booze, mince pies and carrots, and, in the case of one small girl, getting extravagantly teary because Father Christmas may callously pass her by.

The emotional impact is strong from the start. An early scene shows a family recording a message to camera for their dad, currently serving in Afghanistan: a sobering reminder of numerous forces families in the same situation. Within seconds the Dad bursts in, still in army gear, to surprise his boy and girl. This scene is currently being used by Sainsbury’s, who financed the film, although they sensibly avoid slapping on product placements or promotions. Sure, it may be a serious sentiment-fest, but the kids’ reaction is enough to warm the coldest soul, and from that moment the film takes flight.

We’re swiftly taken through a snapshot of life at Christmas from the excitement of Christmas morning to the torpor of the alcohol-soaked afternoon. And then, of course, there are then presents. From Prada bags to radiator keys via Cilit Bang and even a Barbie Graveyard, the humour of our eccentric spending habits does more to reveal the strange commerciality of Christmas than preaching ever could.

This is an unashamedly feelgood film; and to reinforce the seasonal spirit of sharing, it has been released absolutely free to watch on You Tube. What are you waiting for? Slap it on full screen, heat some mulled wine and dig in.