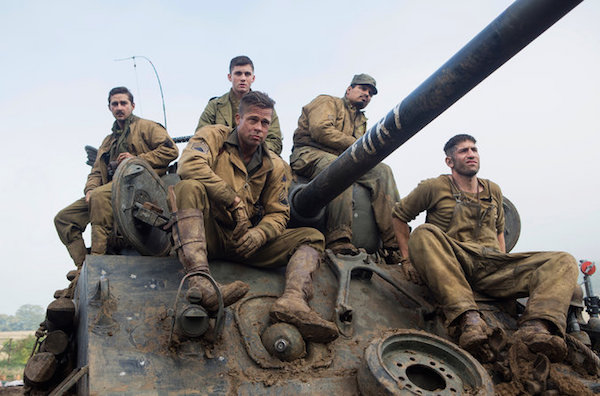 A rag-tag group of grizzled grunts led by a charismatic and haunted officer; an innocent young clerk who acts as our eyes and ears as he’s thrown unwitting into a maelstrom of horror and death; a series of atrocities that rewrite the humanity with blood and rent flesh. It’s Saving Private Ryan. It’s Platoon. It’s Black Hawk Down.

David Ayer, director of the extraordinary cop drama End of Watch, is happy to hoist his danse macabre onto the shoulders of those giants, focusing his attentions on the spectacle of war rather than telling war anew. Battles are intense, gruesome and exhilarating, flames light landscapes like a Bosch dreamscape, and bodies become tapestries of blood.

There are stand-out scenes. An excruciating dinner-table altercation in which Ayer simultaneously shows his mastery of tension and his discomfort with female characters (make them German, at least they don’t have to say anything) recalls the masterful opening of Inglourious Basterds. A quiet moment when Lerman’s green recruit finds out what became of his predecessor is classic horror-horrid. The pitiless attention to the detail of death is unrelenting – torn bodies are piled high, unnamed soldiers are squidged into the mud by thundering machines, hand to hand combat is grubby and penetrations painful and liquid.

It’s exhausting stuff – but it’s rarely moving. The beats of male friendship so perfectly encapsulated in End of Watch are all-too-often missed here, the relationships built on anger, frustration and claustrophobia, although on occasion something more breaks through in stunted, half-formed sentences that speak to a depth of feeling, barely existent to start with and numbed to breaking point by years of battle.

Brad Pitt does his best as the scarred Captain Miller, seemingly careering towards a heroic last stand, and Logan Lerman’s sorrowful eyes bring a smidgen of heart, but Michael Pena, Shia LaBoeuf and Jon Bernthal, all strong and unique actors, are left with stock characters and little heavy lifting to do, though Bernthal does red-neck thug very effectively.

There’s no denying Fury puts the viewer through the ringer with the crew as the titular tanks trundle around Germany wiping out pockets of resistance. For a moment, in its dying embers, it touches on something profound about what it means to be in, and fight for, home. But the film is a bruising beast and has little time for such subtleties.

It’s tempting to criticise its thematic weaknesses, or maybe lack of care, but Fury achieves exactly what it sets out to and crushes the viewer under its visual and aural treads.

It’s a shame, though, that the sound and fury signify so little.