Try showing a non-Brit a sketch or two from Noel Fielding, and they’ll probably respond with a deeply puzzled – even disturbed – look. From his breakthrough as eccentric zoo-keeper Vince Noir in The Mighty Boosh to his latest TV series, Noel Fielding’s Luxury Comedy, Fielding is the grand ambassador for our island’s particularly twisted comic tastes.

“It was such a weird show,” Fielding admits of ‘The Boosh. “Julian [Barratt, his writing partner and co-star] and I thought it was pretty mental how big it had got, considering that we didn’t compromise on anything, we didn’t leave anything out, and we were doing a show about a Crack Fox and a transsexual merman with a ‘mangina’. It was pretty amazing.” 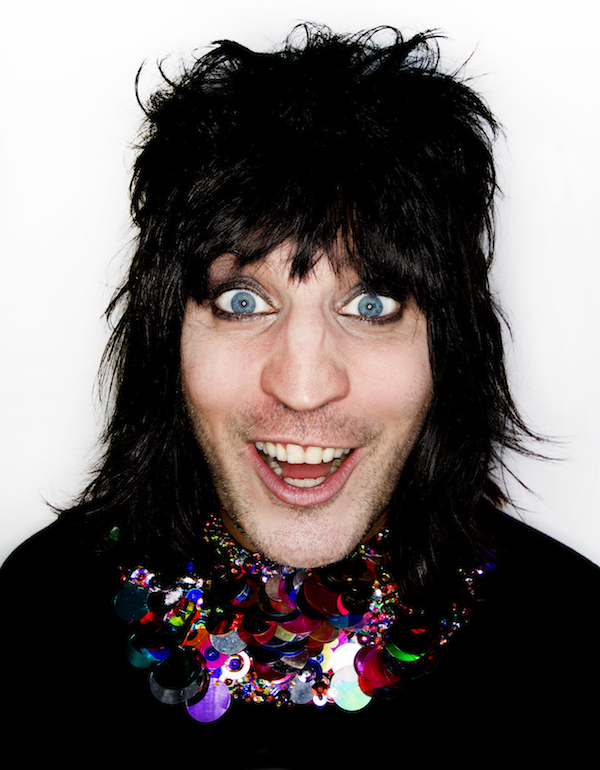 Fielding is hoping to push our imaginations even further with his new nationwide tour, An Evening With Noel Fielding, which applies his surreal creativity to every element of the show. He’ll be bringing out some of old favourites, like his signature character The Moon, but the focus is on fresh material and an adventurous format very different to most man-with-a-mike stand-up shows: “There’s live animation, which takes ages to work out how to do, live music, brand new stand up, which I’m excited about; it’s a really complicated and expensive show – I always want to put on a show that costs as much to put on as it takes in tickets.”

He’s open about the fact that he’s making a big gamble – “If this doesn’t work,” he admits, “I’ve got nothing” –  but then Fielding’s approach has always been all-or-nothing. In the heady aftermath of The Mighty Boosh’s success, it looked like he might just be en route to burnout.

“It got to the stage where everyone wants a picture of you, and I don’t think Julian was comfortable with that whole ‘celebrity’ thing,” he explains. But while Barratt stepped back from the limelight, Fielding threw himself into the London party scene, often papped roaming Camden with his pals Amy Winehouse, Razorlight, and the Geldof sisters. “I’m not very good if I don’t work; I’m a bit of a workaholic and I start going out partying, doing stupid things – I get bored very easily so I have to keep stimulating my mind.”

But the hard work has continued to match the hard play, and in the decade since The Mighty Boosh first aired on BBC Three, Fielding has gigged at Wembley Arena and the O2, not to mention written, directed and starred in an E4 TV series, Noel Fielding’s Luxury Comedy, Set in a café on the side of a Hawaiian volcano staffed by Andy Warhol and a PE-teaching chocolate finger, the second series – which aired to good ratings this summer – proved that his surreal imagination still resonates.

“I wanted the Boosh fans to get on board with Luxury Comedy,” he says, “because I feel like I lost a few of them.” And he’s hoping to continue to gather them back into the fold by presenting An Evening With Noel Fielding in smaller venues. ‘It’s more intimate, which is actually better for comedy. When you are performing at the O2, it’s so massive that the laughter takes 30 seconds to get back to you, which is weird. I just want people to come away thinking “wow, I really enjoyed that.'”

The UK tour An Evening with Noel Fielding begins on 20 October and runs until 12 December. Tickets are available from Ticketmaster.