“I need meaty, I need backstory, I need evil” – and we need more Wallis Day

W allis Day spent her twenty-second birthday in tears. “I was staying at my friend’s,” she tells me. “I screamed at midnight. I woke up all her roommates. I cried the whole day.”

Thankfully, the actress’s tears were the stuff of dreams, not nightmares. Due to the time difference between London and LA, midnight was the moment Day’s US agents chose to call and tell her that she’d won a role in Krypton, the Superman prequel TV series coming to Syfy later this year. “From the moment I read the script I knew the role was perfect for me,” Day enthuses. “I grew up with one brother so we watched Batman, Man of Steel, all the Supermans. I got immersed into that world through him, and I was kind of a tomboy growing up so when I first read this script, it triggered almost a childhood excitement in me.”

We’re talking over the phone a few weeks after our cover shoot in which Day, huge-eyed beneath a dark-chocolate pixie crop, effortlessly rocks a selection of elegantly androgynous separates, heavy on this season’s sexy shirting and neutral tones. There wasn’t time for an interview then and now she’s in LA herself, on the Fox studio lot, taking a break from dubbing lines for Will, an upcoming TNT show about Shakespeare before his big break. 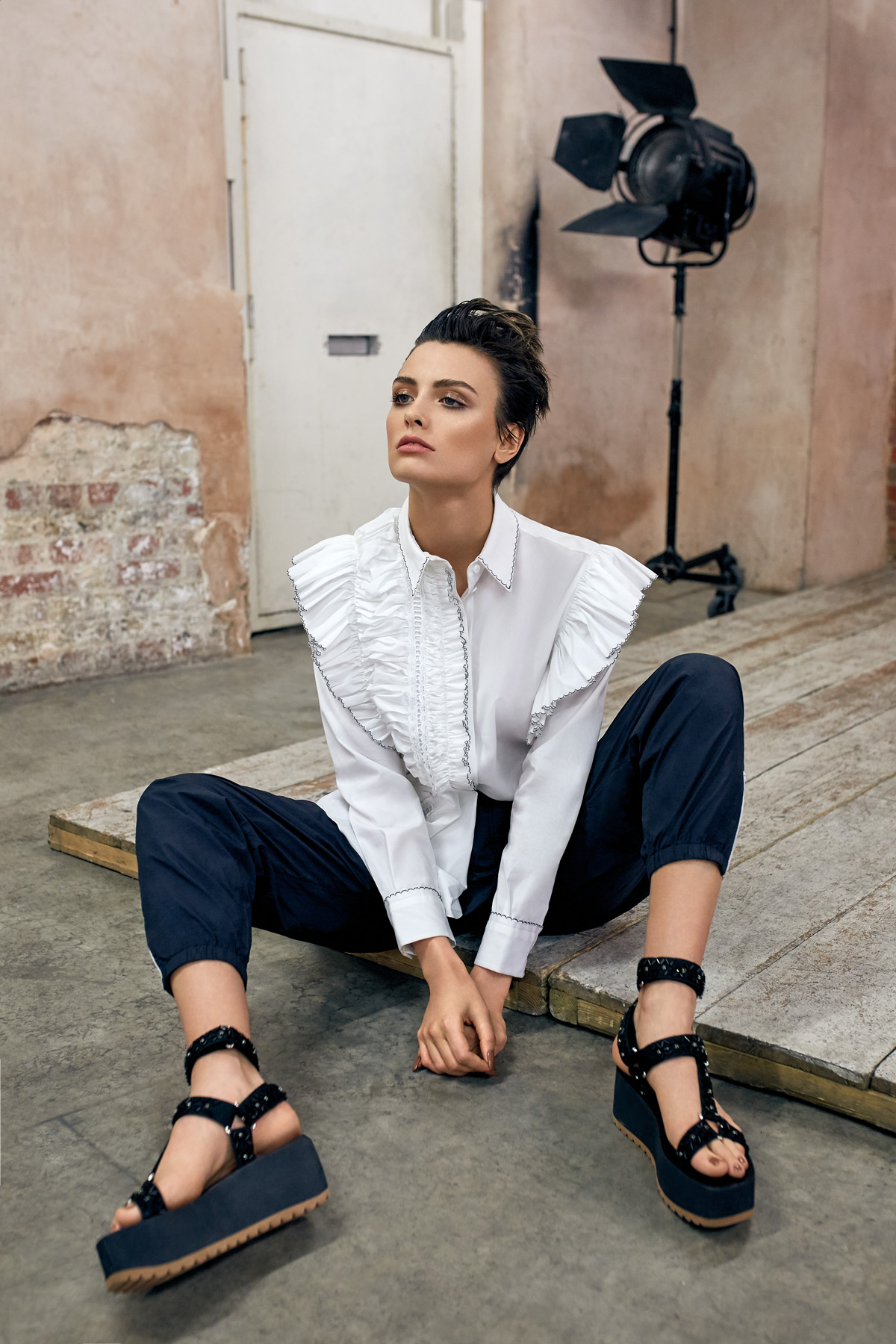 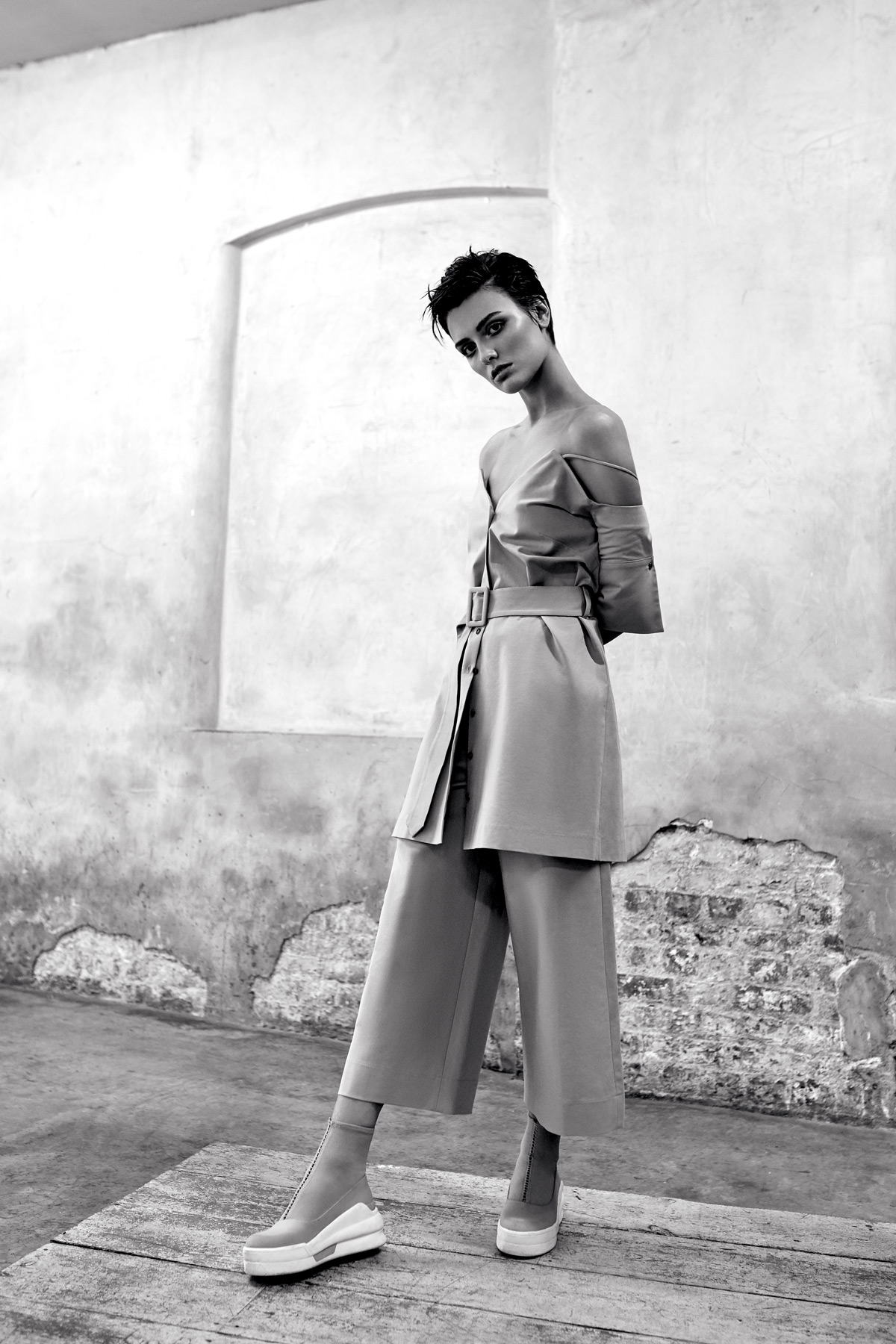 As Day chats between sips of tea – “it’s really hard to get out here!” – it’s clear that the on-trend do is a rather better personality match than her natural blonde locks. She was delighted to scoop the role of Nyssa, the daughter of the chief magistrate on Superman’s home planet, because “she’s tenacious, brave, fiery. I want to do action thriller films. One of the reasons I cut my hair is because I kept getting roles that were cool, but they were the girl next door or the extension of the main character, and to me that’s boring. I need meaty, I need more, I need backstory, I need evil, I need why someone’s evil. To me it’s so much more interesting to play a baddie, a femme fatale.”

I get really into character and sometimes my determination to make those stunts look as realistic as possible could get me into physical trouble.

On the Krypton set, her tomboy tendencies shone through in her somewhat over-enthusiastic embrace of stunts. “I get really into character and sometimes my determination to make those stunts look as realistic as possible could get me into physical trouble. I mean, it’s nothing serious, but I’d often wake up the next day with more bruises than anticipated!” Bruises aside, she’s evangelical about an experience which has obviously been a milestone in her career. “When you’re with such a talented group of people who are as determined as yourself to make the project the best it can be, it’s really inspiring. We were all waking up at 6am together to do a team workout before our call time, and when you start the day like that, everyone brings a positive energy to the set and it makes it a wonderful atmosphere.” 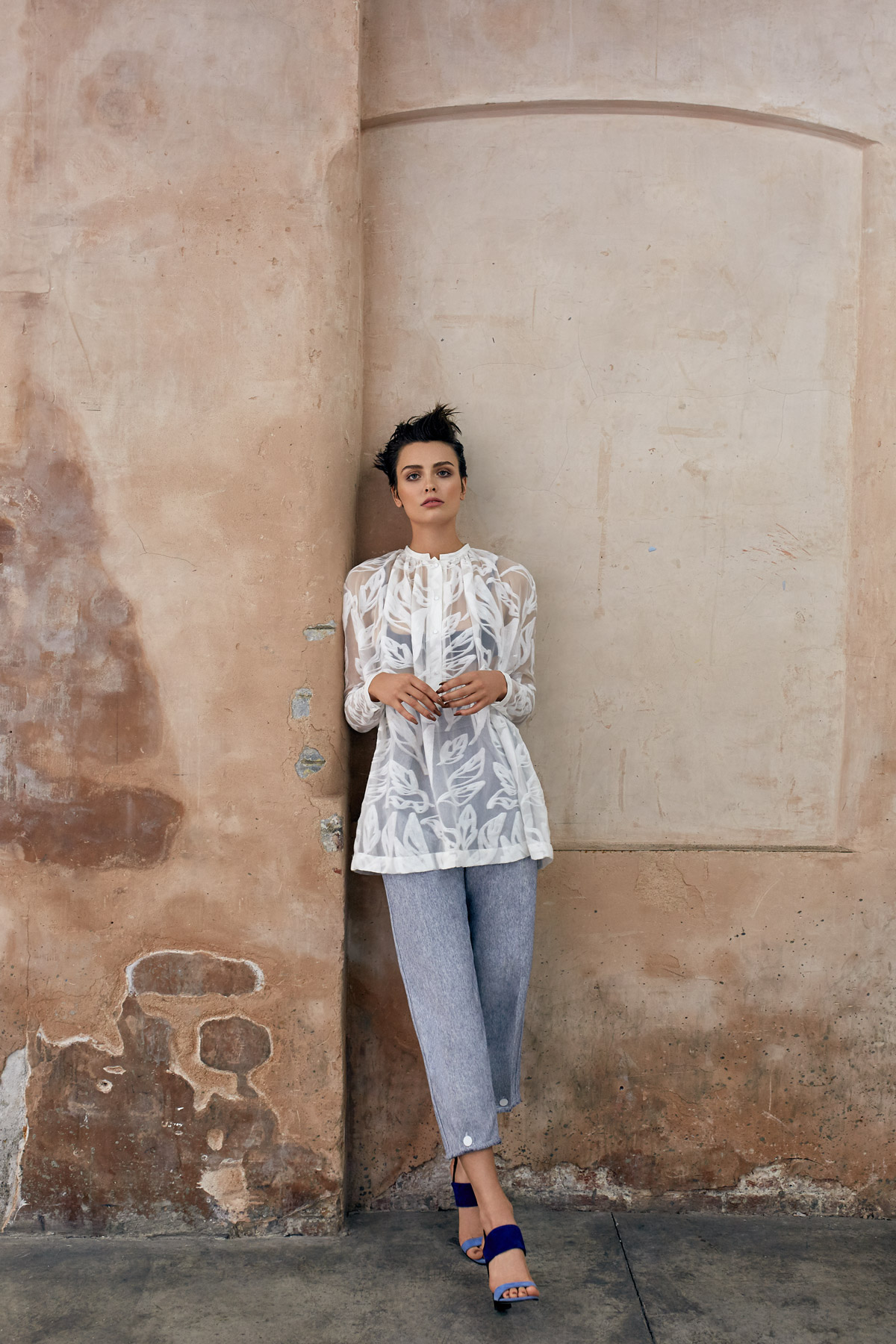 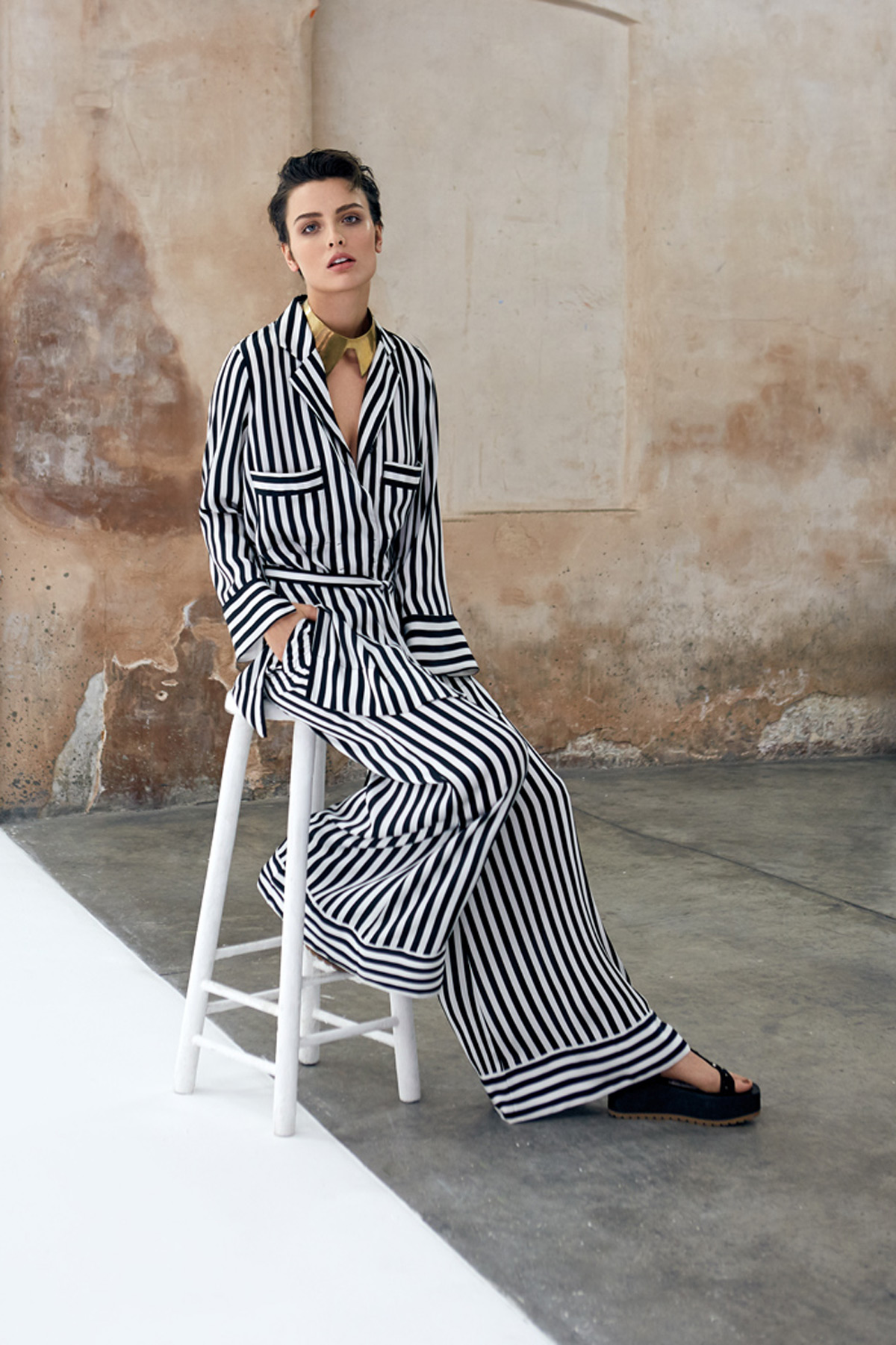 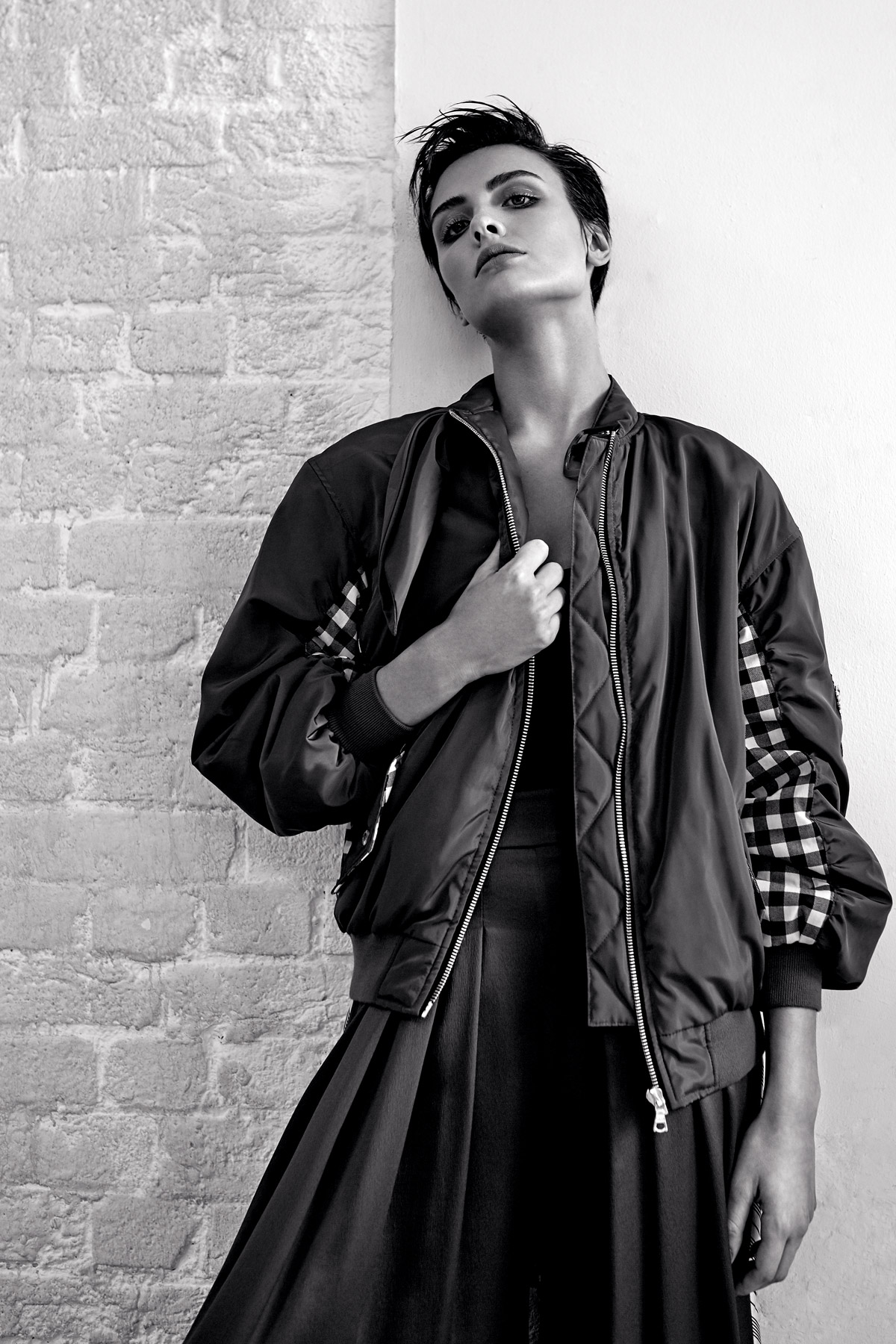 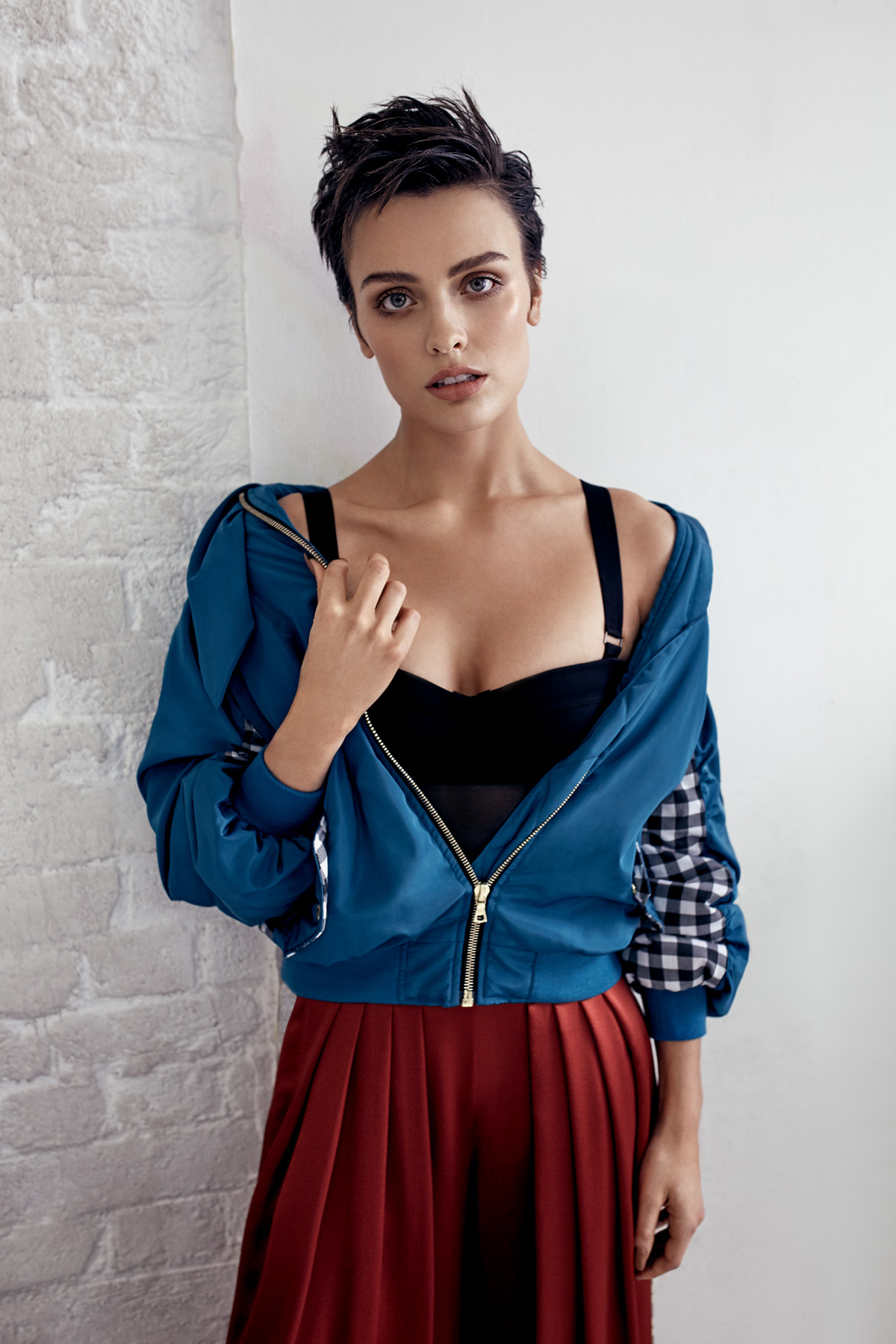 Day was born in Ilford and has spent three-quarters of her life in London, excepting a pre-teen stint in the countryside. She left school at 16 to pursue acting, bunking with a group of friends who are still the mainstay in her life. “They’re always there for me, we’ve been through everything, and they’re like my family.” Early roles in Hollyoaks and Jekyll and Hyde led to her current run of success on US TV – she’s also filming series three of The Royals – and her model height and looks have secured her campaigns with the likes of Garnier, Superdry and Nike. 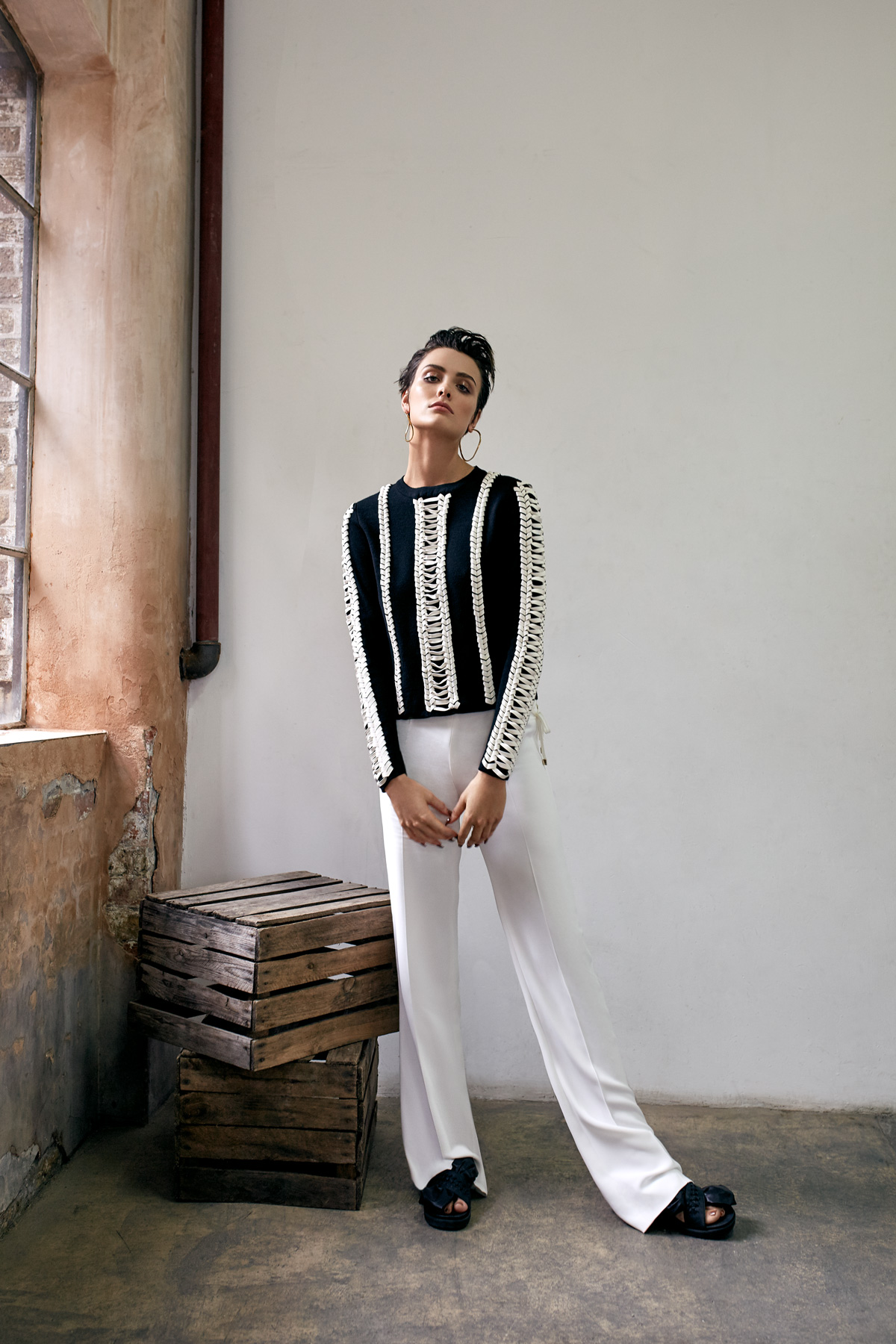 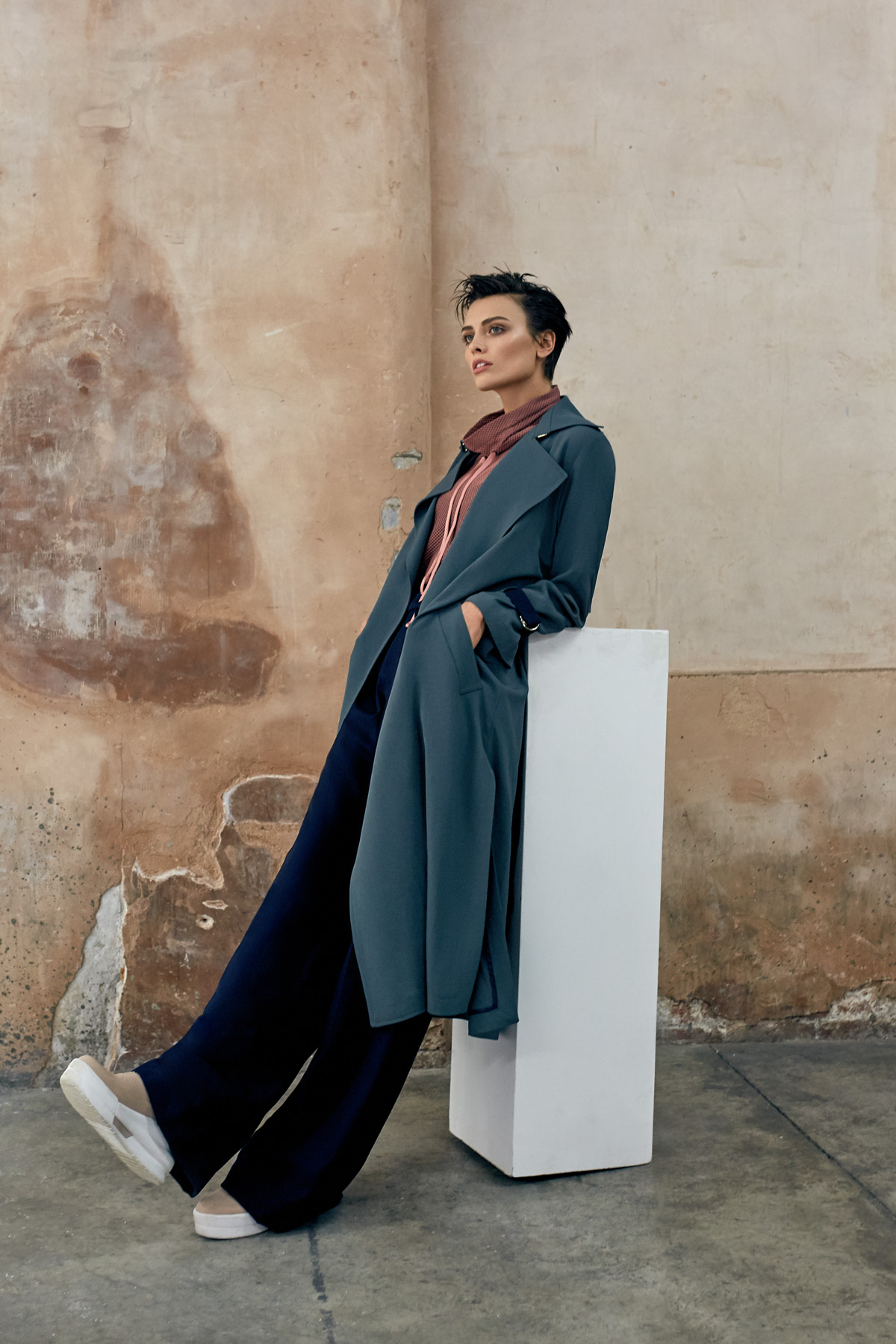 Day would love to continue modelling when she’s not quite so busy with Hollywood; she’s a “diehard” fan of British designers such as McQueen and Burberry, and loves the current Vetements collaborations. For everyday, however, she defaults back to that action-girl look, favouring biker boots, skinny leather trousers, a western belt and outsized jacket. Except when she’s in the heat of LA, when she runs between meetings in a pair of copper and white Dolce Vita Zalen trainers, or hits the sportswear for swimming, skiing and hikes. It’s a vibe that chimes beautifully with the louche power-woman styling of our cover shoot.

I have a team of killer agents and managers across the world and honestly when I say that they are my dream team, I mean it.

Day has achieved a lot in five years, but she’s adamant that it’s down to her team, as much as her own talent. “This industry isn’t a one man show,” she insists. “I have a team of killer agents and managers across the world and honestly when I say that they are my dream team, I mean it.” But she’s pretty savvy at building her own fan base, too; she boasts 112K followers on Instagram and 51.8K readers of her self-admittedly opinionated tweets. And When I ask what she thinks of the political maelstrom currently unfolding on both sides of the pond, the urge to be outspoken and the knowledge that, nowadays, she must be careful about what she says, plays out in her voice. 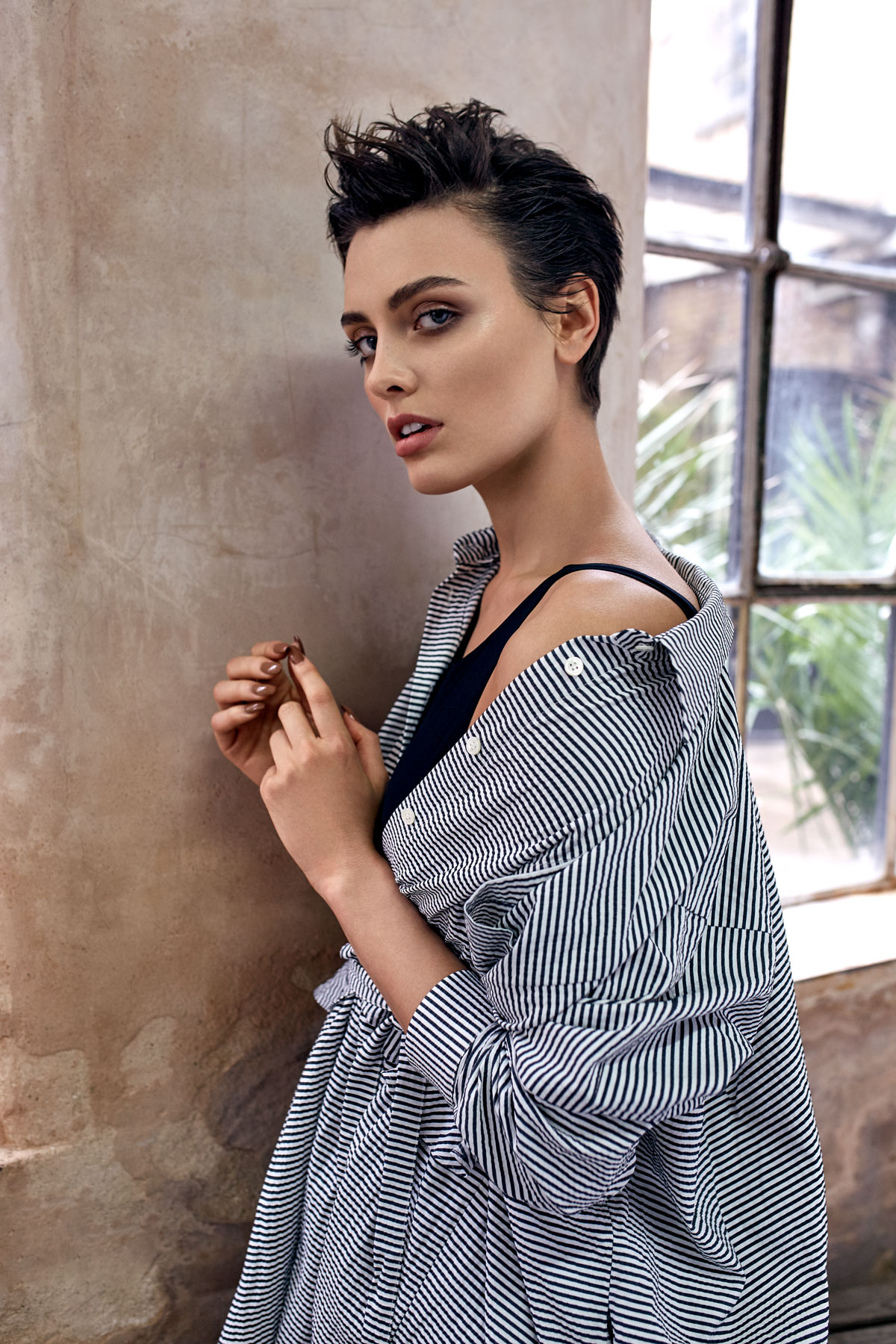 “I try not to talk about it because there’s a lot happening right now that infuriates me, and I’m someone who can’t sit back and watch hate thrown on innocent people. My old teacher used to say that by 25 I’d either be prime minister or in prison,” she adds with a laugh. It’s clear, however, that she won’t be paying a visit to Trump Towers anytime soon. “For me, anyone who tries to segregate people or alienate individuals is ignorant and should not be in a position of power. That’s all I’m going to say!”

I don’t want to be a Bond girl, I want to be the first Jane Bond! I don’t think there’s anything sexier than an independent woman with a brain who can really stick up for herself.

Her preferred sort of power has always been a little more under-the-radar; as a child, she longed to be a secret agent, until “my parents tried to steer me towards playing one instead.” Her father used to encourage her to aim for a Bond girl, but that was never going to appeal to this biker-boot-wearing comic book nerd. “I don’t want to be a Bond girl, I want to be, like, as clichéd as this sounds, the first Jane Bond! I don’t think there’s anything sexier than an independent woman with a brain who can really stick up for herself, you know?”

Oh, Wallis, we do. And from the way things are going, it seems like Miss Day might just be crying – in a good way – on a few more birthdays over the coming years. 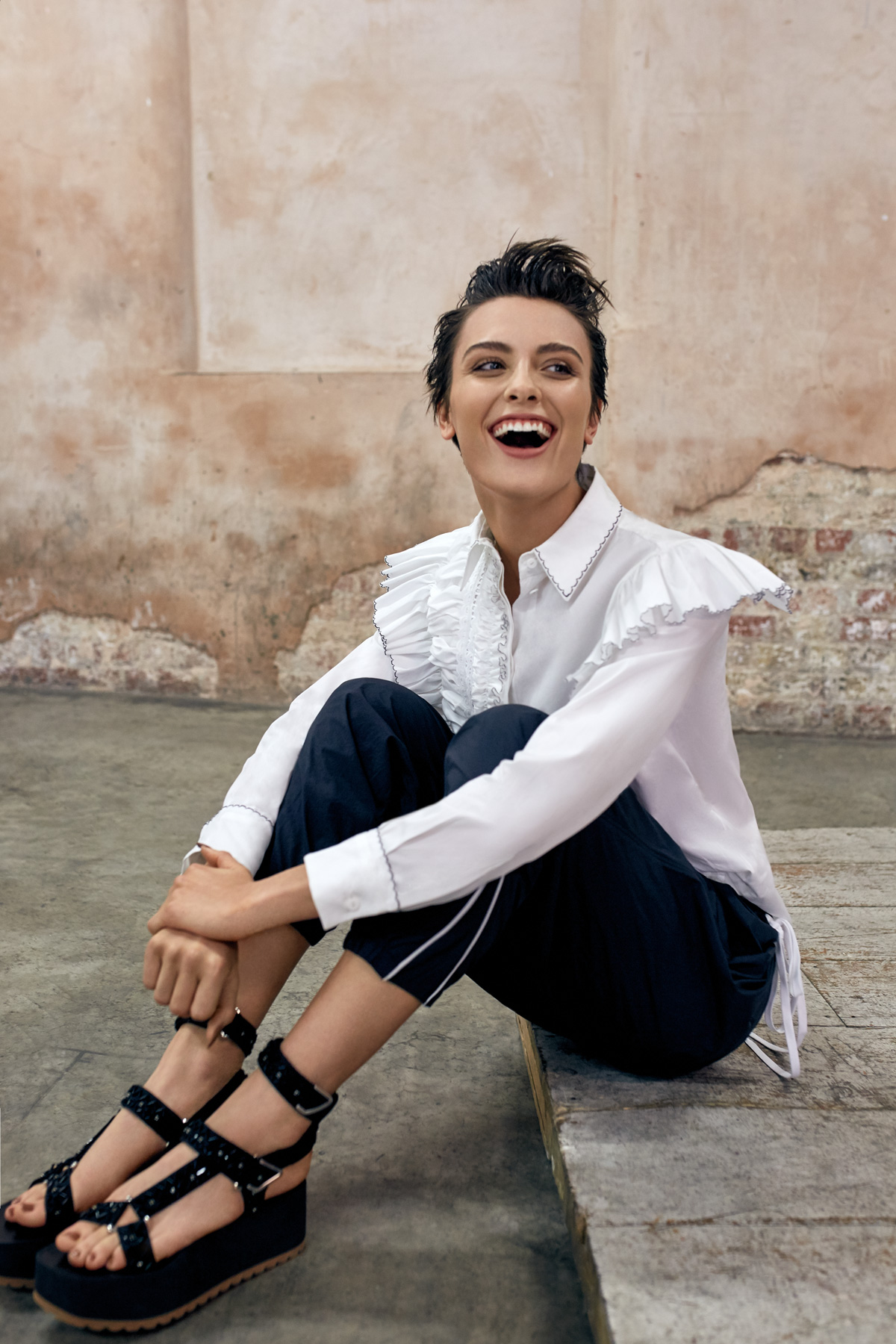 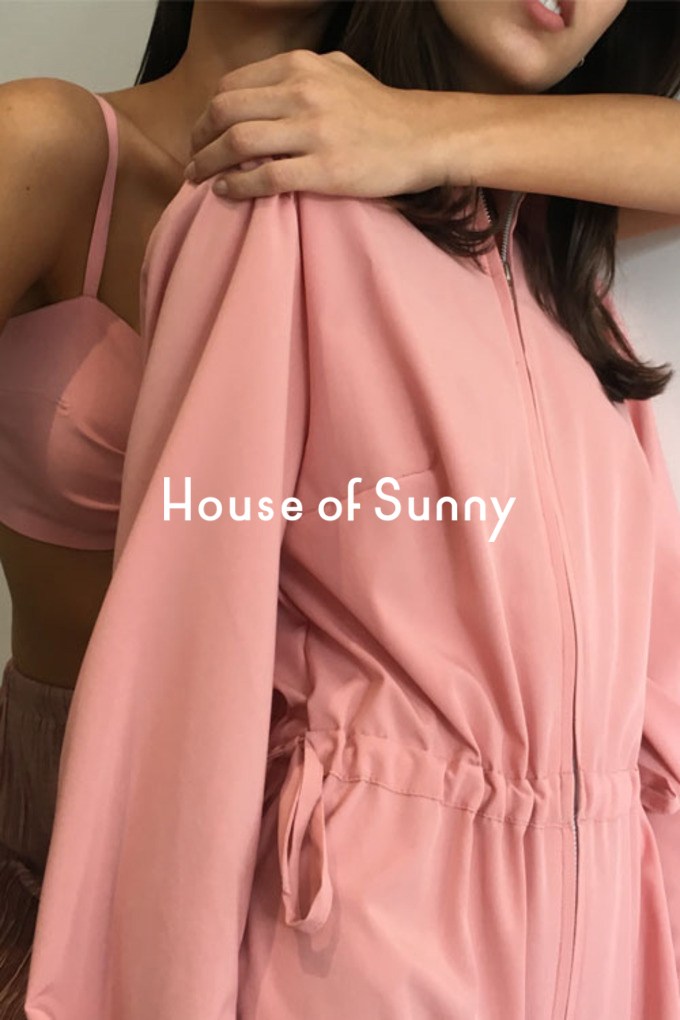