PHOENIX sits down with fledgling Hollywood actor and Billboard’s Number One Hip-Hop Artist of 2015, Machine Gun Kelly, to chat London, elevator phobia, and closing Joshua Kane’s LC:M AW16 show, ‘Houndsditch’, which saw a selection of celebrated musicians known for their personal style take to the catwalk, including Taboo from Black Eyed Peas and Dougie Poynter of McBusted.

MGK, how are you enjoying London?
Well, it’s my first time being able to experience the city, but I don’t do tourist shit: you gotta feel the streets. Basically, I’ve been familiarising myself with the fashion scene here in London, playing my guitar, thinking a lot, smoking weed…

Have you noticed any differences between here and London in terms of style?
Here, you know, in London, style kind of seems to run the scene, whereas in Cleveland there is no scene. We work, go to each others’ houses, we drink and have fun… it’s just a small city doing anything it can to get by.

How would you describe your style? Is style important to how you define yourself as an artist?
I guess today I’m kinda punk-rock. But, [in terms of having a defining style] nah, not at all. I think that’s why people get confused. Somedays, I wake up and I wanna put on a huge baggy t-shirt. Other days I’ll wear a Marilyn Manson top… or, you know, nothing. 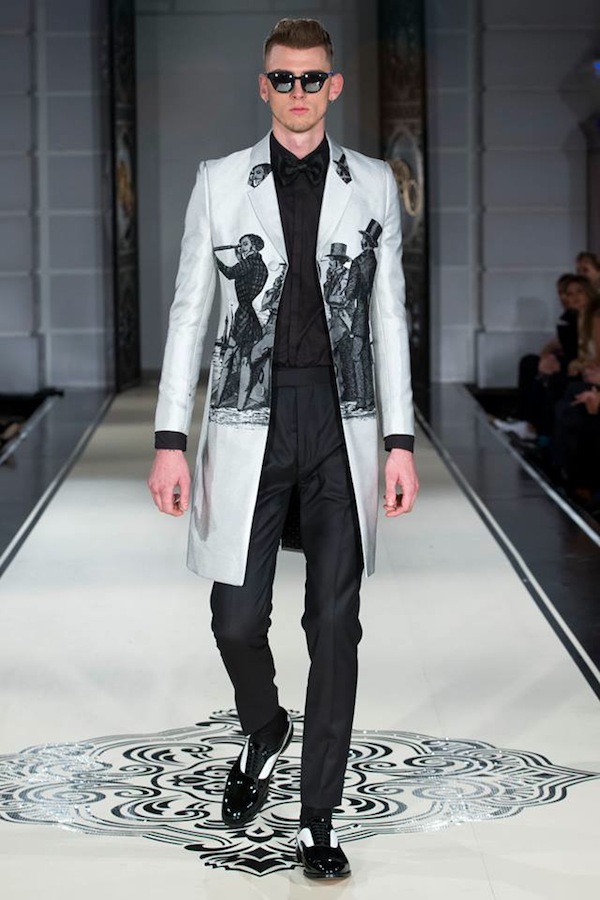 That’s when your Instagram followers go crazy – especially the girls!
Exactly! I think that’s what so punk-rock about it. Maybe I’ll wear the same jeans like five weeks in a row. Who cares?

Right, a classic question: which is your favourite tat? Any with a great story behind it?
My favourite tattoo is this one right here; I got it in the UK. I have a double decker bus tattoo [shows tattoo on the left side of his chest, on his ribs]. I got hit by one when I was in Manchester and I survived, so I put a stick figure getting smacked by a cartoon bus… with the date on the windows.

So, you’re modelling in Joshua Kane’s show for London Collections Men. Is this your first time modelling?
I’ve never done this before – it’s awesome. Pretty cool.

Do you get nervous before going on stage?
I do, yeah. I’m extremely nervous right now. It’s very different [from performing onstage] but that’s what keeps us all going, right? Just doing anything that thrills; this is a new thrill for me and I’m excited to see the high that you can get from expressing someone else’s brand. One that the creator has so much pride in, especially when you have you have so much pride in what he’s created. Suddenly, you’re repping more than just you when you go out there. I think he [Joshua Kane] brought me in because I’m a very unfiltered representation of myself, of ourselves.

I guess that’s the difference between acting, where you’re exclusively representing someone else, and music, where you’re just yourself.
That’s what’s so cool, though, when you’re acting you don’t have to be yourself: you can be this total fuck-up, but it’s just a character. But when you’re an artist and you’re a total fuck-up, you have to own it. Like Jim Morrison or something. But, in modelling, you have to strike this balance.

Do you know what you’re wearing tonight?
Yeah, I do. All the models are wearing one look, that’s it. I’m also closing the show.

Have you had a look at the collection?
Yeah, it’s beautiful. The colour scheme is beautiful; it’s going to be an exciting show. Like I said, I have a lot of pride in this.

Thinking about the relationship between rappers and fashion, what do you think of this ongoing trend of musicians not just doing music anymore?
I hope it’s not a trend; I don’t like it when too many people try and do too many things. I like it when people have a niche and stick with it. If I were to do anything else, it would only come from my own hands, eyes and mind, you know? I would only do it to develop my creativity. For example, this [modelling] would never have been a thought four years ago. I didn’t know who I was, what my look was, any of that. As I feel more comfortable with myself, you know, I thought that I want to try and get a high off something new. I love chasing highs, that’s a good and a bad thing; but I always wait until it’s genuine, I promise that if you see me doing anything, it’s genuine.

If I won a Grammy next year…there’s been so many artists who have received backlash like, ‘ah, they didn’t do this’, you know? For me, there would be no disappointed people in the hip-hop community because they have watched me earn my stripes for years, you know what I’m saying? That’s what I like about Joshua Kane: he spent ten years under somebody else before he broke off and did his own thing. If he does great tonight, and everything blows up after tonight, the fashion community won’t be like ‘oh, who’s this overnight sensation?’ It’ll be more like, ‘we’ve watched him grow and he’s getting what he deserves.’

Obviously 2015 was a massive year for you: you were number 1 in the Billboard Hip-Hop charts, your album General Admission got to number 4 overall, and you were the first American to perform in Paris after the Bataclan terrorist attack. What was your personal highlight of 2015?
I think it probably was that Paris performance; everyone singing the national anthem. That was something really special, you know. That was bigger than music, even the staff – who had seen a million shows come through there – they thought it was a really special moment too. I am glad I was there for that.

What are you doing now; still on tour?
Nah, I’ve been on tour for the past six months. For now, I’m just going to destroy this runway and then I’m going to party my ass off. We won’t even remember what we’re going to do tonight.

Are you taking a bit of a break now?
I’m staying [in London] until Monday, then I’m rebooted. I find a lot of comfort in my guitar lately, so music is back in my blood, and boiling. So I’m excited to get back to the music.

Maybe some acoustic stuff…(!)
Man, you never know! I never thought a month ago that I’d be walking in, let alone closing, one of the most – I don’t want to say ‘hyped up’ because I don’t believe in hype – but one of the most exciting shows of the week. He’s [Joshua Kane] going all out.

I know you don’t like to say who you would like to collaborate in the future, but – if it’s not too controversial – who was the best person to collaborate with so far?
No-one’s ever asked me that question. Like, my favourite ever performance collaboration was Blink 182. We did ‘Dammit’ together. The coolest c’lab was probably DMX, because he was the craziest motherfucker I have ever seen in my life. Absolutely the person you thought he’d be. You know what I mean, just the craziest motherfucker walking on planet earth.

That must be so nice, to grow up thinking…
Oh, it’s a relief! Growing up thinking that he’s out of his goddam mind and then to know, for sure, that it’s not just a persona. A lot of people get mad with me because, I mean, it’s not like I pitch my music to be the most sane or chilled, but people seem to think that I’m not…

What’s it like collaborating with rock artists as opposed to other rappers?
There’s no egos, because you’re in a different game. I have been kicked off so many rap songs that I’ve done features on just because, you know, I will tear the track up and people are like ‘ooh, that’s better than my verse, I don’t know if I want that’. You know, but that’s just my state of mind on why my verses end up, you know, not making it. There’s less pride when you’re collaborating with rock artists because they’re just stoked to be working with someone on the other side. And likewise.

Just to wrap up, I have four quick-fire questions: firstly, what was your top track of 2015?
To be honest, I spent 2015 listening to old-ass music. 2015 was the year I shied away from listening to new releases and stuff like that. I wanted to fall in love with an artist again. I want a persona to come out, you know what I mean?

I get that, you know I was thinking about this on the way over here: our generation is such a consumer of sound-bites and singles.
Yeah, it’s about the songs, dude. It’s not about the artist anymore, and I want to fall in love with an artist. I want someone to walk in the room and…

Have you got a New Year’s resolution?
To be less…angry. Take a breath.

One thing you miss from Cleveland?
Um, a soul-roll.

Don’t say that in there (gesturing to models’ changing room)…
Oh god, that vibe – by the way – is a whole other…I was not ready…Everyone is extremely good-looking. Like, too good-looking, to the extent where you’re like, ‘aw shit’.

Final question: tell me one thing about yourself that would surprise me.
Man, this is so fun. I want to give you a good answer because there’s so many surprising things about me…I have so many scars, so I’m just looking at the scars and trying to think, like, should I tell this story…I hate elevators, did you know that? I’ve been stuck in an elevator four times, that’s my thing.

What was the longest amount of time you got stuck?
Forty-five minutes, with Puff and…fifteen other people. It was Vegas on New Year’s Eve in the Cosmopolitan Hotel between the second and third floor, and they wouldn’t send help because they thought we were drunken idiots, like just pressing the help button. This was before I was signed.

Thanks. I’m sure you’ll smash the show.
This has really calmed my nerves, thanks.