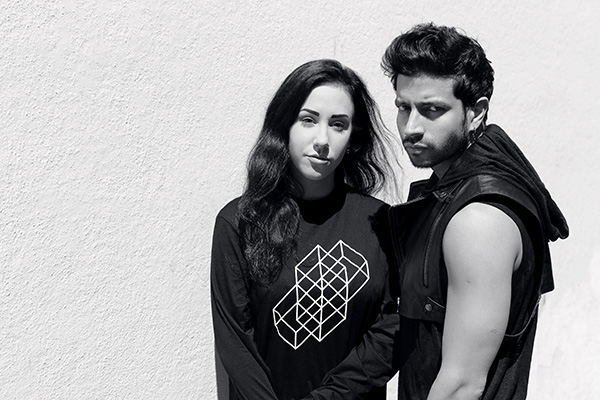 On the eve of their SS16 London Collections: Men show we drop by into the east London studio of Ada + Nik to talk design details, superpowers, and selfies with Nik Thakkar

Hey Nik! Tell us about the SS16 collection…
“For SS16 the collection is called ‘SYN’ which means “co” or “with” in Greek– symbolic of the plus sign in Ada + Nik. The plus sign appears throughout the collection in stitching, prints, laser cuts and architectural art references. SYN is the attitude of how we move forward through positive co-existence and collaboration.”

What’s the working relationship like between you two?
“We’ve basically morphed into the same person; we’re on similar wavelengths.”

How stressed are you?
“There’s a lot going on in my head. Wednesday I was quite on edge. Today I’m pretty zen!”

What tunes are currently playing in the studio?
“Ada and I have a really varied taste palette when it comes to pop. We’re working with Last Japan, who’s our sonic curator this season. He’s developed a soundtrack for Syn that will be played at the immersive experience tomorrow. We’re also working with Wife, who did the soundtrack for our film last season.”

What’s in your LCM survival kit?
“Tech wise – my Moto 360 Smartwatch which I can get all my emails on. We’re quite a tech-focused brand – we have smart fabrics like memory cotton that retains shape and structure. Our bomber jackets you can screw up and put in your bag and they come out looking fresh. Also in my kit – Blk water which is infused with trace minerals. Basically water for superheroes! And Haig Club whisky. Oh, and my favourite boots – Palladium boots. Also made for superheroes. You can literally run in them.”

….If you could have a superpower what would it be?
“Teleportation. Also being able to rob ATMs – don’t write that [laughs]. Or flying for the thrill of it. I used to do that my dreams.”

How will you celebrate after the show tomorrow?
“I never really give myself a pat on the back… I’ll be there cleaning up the mess! Sweeping up black sand… The rewards will come eventually!”

You always look great on your Instagram feed. How do you take the perfect selfie?
“You need as much light as possible. And good abs. Selfies are such a personal thing – my logic is it’s just there for you!”