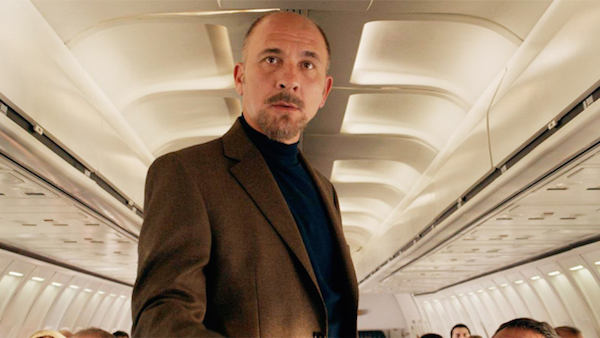 As though frantically nourishing our minds in preparation for the lean nutritional offerings being prepped for summer’s onslaught of explosive lunacy, cinemas are currently awash with challenging films poking at the soft belly of 21st century masculinity. Posing penetrating and troubling questions about identity, family, ageing and (waning) self-belief, there’s a palpable sense of angst in the latest releases which even the Marvel juggernaut can’t fail to address (consider middle-aged Tony Stark’s burgeoning alcoholism in Iron Man 3, Bruce Banner’s destructive middle-aged rage in The Avengers, or Thor’s muscle-bound fish-out-of-water shtick).

Wild Tales, a comic and disturbingly plausible Argentinian portmanteau, serves up a simmering strew of male rage, betrayal and frustration that erupts in acts of eye-popping violence and revenge. The most impressive vignette sees two men – an urbane swanker and a blue-collar bully – clashing viciously on a rural road after a throwaway slight escalates into a bloody fight to the death, with neither able to back down in an insane and mortal dick-swinging contest. Another of the tales, starring incomparable sad-sack Ricardo Darin, follows a downtrodden city worker exploding after having his car towed and entering into a soul-crushing whirlpool of Gilliam-esque bureaucracy. In both stories, and others in this very fine film, male egos are damaged, notions of bravery and self-determination are challenged, and the law of the jungle pervades.

The biting Swedish domestic comedy Force Majeure pivots on a moment of cowardice that brings snowballing recriminations and self-doubt. After a father abandons his wife and children in an Alpine restaurant fearing an oncoming avalanche, the persona he has cultivated for years comes crashing down around him. As he struggles to reassert his self-image as a handsome, impulsive alpha male, the film offers priceless moments of bemusement as those around the family try to account for his atavistic dash. Ending with two sequences of sublime ambiguity, Force Majeure, like Wild Tales, roots around for the animal instinct in man, juxtaposing it with the social and familial norms expected of modern masculinity and finding deep divides. It’s provocative stuff.

While We’re Young is the latest from outstanding American director Noah Baumbach (The Squid and the Whale, Frances Ha). It finds middle-aged married couple Josh and Cornelia (Ben Stiller and Naomi Watts – both superb) making friends with a couple two decades younger than them and measuring their more staid, less spontaneous existence against the latter’s rock ‘n roll lives. Stiller, Hollywood’s go-to man for impotent male rage (look no further than the brilliant Mr Furious in Mystery Men, a hero whose power is the ability to get really, really angry), is a ball of self-doubt and faded potential, and finds rejuvenation via the exuberance, worldview and ethics of the younger generation. His inability, or unwillingness, to finish an epic documentary he has been working on for a decade is a fitting metaphor for middle-age stasis and fear of what comes next, and its insights into fatherhood and fear are piercing, not least for a thirty-something who straddles the green line separating the film’s feckless youth and nervy middle-agers.

One suspects that the protagonists of each of these stories would appreciate the slick gunplay of John Wick, a mid-budget Hollywood action film starring Keanu Reeves (now a staggering half-a-century old), who plays the eponymous ex-assassin whose blood rises after his dog is murdered by a young thug during a break-in. Wick is super-fit, polite, dapper, effortless attractive to the ladies, and a dab hand with the multiple weapons he has at his disposal. Loved by his wife, loyal and charismatic, in touch with his feelings, a man of action who is nevertheless cool, calm and collected even in the most extreme bullet-ballet, he draws together all the qualities that the middle-aged men in Wild Tales, Force Majeure, and While We’re Young conspicuously fall painfully short of.

John Wick is great fantasy fun, the latest in a line of tough action films re-casting older men as smouldering men of action. Liam Neeson’s career took a sharp and lucrative tack towards the bloody after 2008’s Taken unexpectedly raked in big bucks, while Sean Penn and Kevin Costner have appeared on posters gun-in-hand, laughter lines on display and ready to rumble. It appears we’ve grown to like our leading action hunks with a renaissance bent, as good with their kids as they are with an uzi.

So while action cinema, as ever, manufactures a ‘ideal’ vision of manhood, the tensions, fears and frustrations of modern masculinity in everyday life are playing out through some fascinating films. But if you don’t fancy something quite so focused on the precarious state of the modern male, there’s always the new Will Ferrell comedy, Get Hard, to pass the time, in which the star plays a paunchy and lily-livered hedge fund manager who enlists his car washer to help him become a tough guy after being sentenced to hard time for fraud. Or war film Good Kill, in which Ethan Hawke struggles to connect with his family, his friends and indeed himself as a pilot who feels trapped and alone after being confined to flying drones out of a shed in Las Vegas.

What on earth would Tyler Durden say?