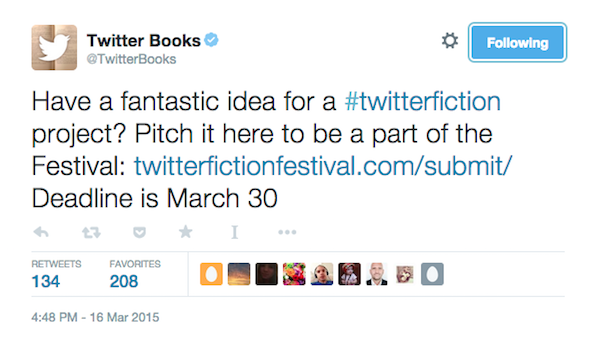 Flash fiction is nothing new. Ernest Hemmingway is rumoured to have taken part in a bet that said he couldn’t write a short story that could make people cry in six words or less. For Sale. Baby shoes. Never worn, is what he wrote and those six words made him $10 richer – not to mention an unwitting early adopter of Twit-fic, or Twitterature.

Modern technology has not just changed the way we see the world, but what we want from it. Social platforms mix short, snappy personal updates with news headlines, celebrity gossip and slick brand campaigns – the result is eclectic, open-ended and immediate, where news about your friend’s recent holiday appears right next to news about the latest election. So what does this mean for literature?

For one, if we’re saturated with information that hits us at break-neck speed in only 140 characters or less, it follows that we’ll want at least some of our fiction and poetry to reflect such brevity and accessibility. There’s been a #Twitterfiction festival since 2012, and it’s become an international success, with tweeters adopting the hashtag to broadcast their super-short stories all year round. #Twitterfiction was created under the premise that “the platform is a powerful tool for more than sharing news and telling the realities of everyday life. It’s a place where fiction lives”. The platform’s amalgamation of news, pop culture, friends, family and think pieces makes it a real-time hub for our life experiences, and rather than dismissing #Twitterature as a facet of low culture, the literary community is embracing it as a force to be reckoned with.

Pulitzer Prize-winning novelist Jennifer Egan is one such prolific writer experimenting with online creative writing. Although no stranger to digital experimentation – her 2010 novel ‘A Visit From The Goon Squad’ includes an entire chapter told via a PowerPoint presentation – she’s recently began to look to social media itself as a place to publish work. Her spy thriller short story ‘Black Box’ was originally published in 2012 as a series of tweets scheduled an hour apart, and rather than creating something clunky or forced, she managed to achieve a formal triumph, where every word used really did count. Instead of limiting what can be said, sites like Twitter have the ability to make each word written, each grammatical construction used and the very minute of publication count in a sea of mass media.

But it’s not only the method of telling a story that is changing but the content itself. Contemporary fiction and poetry, a huge volume of which finds its voice on the internet, tends to be instantly emotive and more concerned with statement than grammar. ‘Alt Lit’ – a contemporary literary movement inspired by internet culture – is often peppered with deliberate spelling mistakes and typological or grammatical errors and uses an array of media from texts to tweets to Tumblr posts.

The work of one twenty-something poet from the Alt Lit scene, Mira Gonzalez, relies on strikingly simple everyday observations of a 21st century world mixed with sweeping and soul-searching statements wrapped in short, simply punctuated sentences – not too different from the kind of content seen in an average Twitter feed.

In ‘TODAY MY ALARM WENT OFF AT 12:20PM’ (capitals intended), Gonzalez gives a list of the things she did that day – “I felt slightly anxious about nothing particular / I walked downstairs and poured coffee into a jar / I asked a person on the internet if I should take drugs” – before asking “what is the difference between being an independent person and being a person who is accepting of loneliness”, minus the question mark. Her popular Twitter account (@miragonz) mimics her poetry with its brutally honest, melodramatic and satirically funny style. Whether you think this kind of writing is the product of overdramatic millennials in the midst of quarter life crises or not, you can’t deny the media we communicate has had an effect on the literature we produce.

And the technology of the iPhone generation isn’t just helping to inspire and generate the literature being produced but is appearing in the work itself. Author Tao Lin has written a poem called ‘May 18 2014 / iPhone tweets I’m abandoning’. It starts: ‘the next 3-6 days I’m going to try to do what some/most (?) large magazines/websites seem to have started doing in the past : tweet the same thing repeatedly’. His style is distinctly similar to note-taking where lists, quick observations and punctuation that reflects thought process rather than grammatical accuracy can not only be seen as an innovation in literature, but a reflection on how we see the world today.

Long-form, traditionally published novels still carry huge value and popularity, of course, but literature is inevitably a reflection of the culture that creates it, so even the greatest print purists should take note. ‘Low’ internet culture and ‘high’ literary endeavour are already mixing, morphing and innovating, behind millions of screens, right now.

@VeryShortStory
Short stories of the micro kind, in 140 characters or less

@MiraGonz
Mira Gonzalez’ tweets are 140 character snippets that any twenty-something with a predisposition to an existential crisis can relate to. She’s funny too.