The American Dream Gets Upturned In Chilling New Thriller The Gift

In The Gift, Joel Edgerton’s surprising and disturbing new thriller, a middle-aged couple move from the urban maelstrom of Chicago to the leafy, peaceful Californian suburbs in pursuit of the new American dream – a cushy corporate job and 2.4 children (what on earth would Jack Kerouac say?). For Simon (Jason Bateman, subverting his goofy image to disconcerting effect) it’s a homecoming of sorts near the neighbourhood he grew up in, while for his wife Robyn (Rebecca Hall, wounded and fragile) it’s a chance for a new start, jettisoning intense city living, with its murky history of mental illness and pills, in favour of a ponded garden, cavernous internal spaces, and cheery, but pleasingly invisible, neighbours.

Of course, as the book says, we might be through with the past but the past ain’t through with us, and there’s soon a weird blip on the cloudless horizon in the form of anorak-wearing social reject Gordo (Edgerton, an unrecognisable sad sack), Simon’s former school-mate who starts turning up unannounced at their home, leaving gifts and generally inveigling himself into the ostensibly perfect set-up. Initially unthreatening, though uncomforting, Gordo’s unpredictable presence is the catalyst for disconcerting revelations, both about his own chequered history and that of Simon, whose all-American winner veneer is soiled by this blast from his past and the tales that come with him. 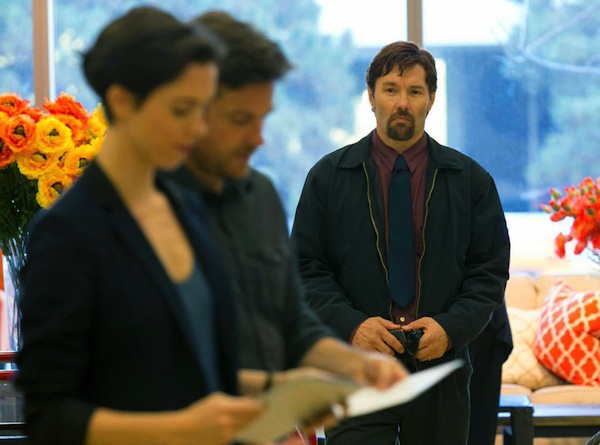 Edgerton, the director, cannily invokes both the promise and the ironies of suburban living, imbuing the all-American dream home with a sense of uncanny as Gordo’s hangdog neediness slowly transforms into something more threatening. Those huge windows, so great for admiring the landscaped garden beyond become potential cinema screens for the committed voyeur, the lengthy corridors with their multiple offshoots, fantastic for family planning and personal space, become multitudinous hiding places for ne’er-do-wells with mischief in mind. And that cultivated garden with its koi pond transforms into a stage for the theatrical psycho to demonstrate how easily life can be taken away without warning.

The Gift is far from the only American thriller to be fascinated by the dichotomy between these two variant views of American suburban life. The suburbs, signifying a move towards a more mature (and seemingly safer) way of living, of dinner parties, gentle jogging and wailing children, are simultaneously imbued with an angst over encroaching age, vanishing freedom and alienation from social excitement – nights on the town replaced with indistinguishable nights in on the sofa and the thrill-turned-curse of the singleton’s pursuit replaced with chasing grubby children around the breakfast table. It’s inevitable that, with such a stark transition, the edges are going to blur and centre not always hold, though rebellion against staid convention is often quickly punished. Last month Eli Roth’s visceral, cynical Knock Knock saw (happily?) married architect Evan (Keanu Reeves) seduced by two seemingly prone young ladies who turn up on his doorstep one rainy night while his family is away and suffering the brutal consequences. His suburban castle, promising splendid isolation from the surrounding world, becomes the scene of his atavistic crime against the cosy life he has embraced, then his prison and his torture chamber. 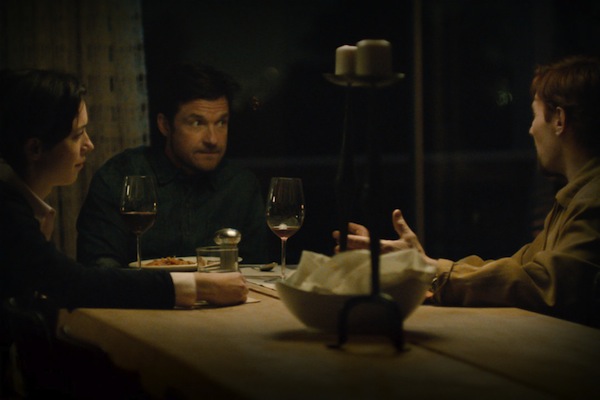 The exploration, and twisting, of the American suburban dream and its strange hypocrisies hit its pinnacle in the 90s, neatly coinciding with a mass migration of baby-boomers who’d lived their youthful dreams in the big cities and had now settled down on the road most travelled – families, sedans and dogs. Hollywood was quick to find the cracks in that façade – Alan J Pakula’s Consenting Adults (1992) sees boredom-relieving wife-swapping turn murderous, while Curtis Hanson’s The Hand That Rocks the Cradle, released the same year, saw the sins of the past come back to bite a model American family, doing for babysitters what Jaws did for sharks. Mark Pellington’s superb 1999 film Arlington Road infected the safety of suburban Washington D.C. with the insidious threat of home-grown terrorism, and a few months later American Beauty found misery, middle-age ennui and murder infesting the Disneyfied hinterlands of LA. Trying to name all the post-Halloween suburban slashers would be a fool’s errand, but the sarcastic and media-savvy teens of the Scream franchise, which kicked off in 1996 give a particularly bleak picture of growing up in suburbia – corrupted by the boredom of their white picket jail cells and the philandering they encourage, the reach out for fame and escape through bloody butchery.

The invasion of the suburban family sanctuary, and the transformation of domestic idyll to terrifying prison, has also fascinated scholarly directors from Wes Craven (in his bruising Last House On The Left (1972) to Palme D’Or-winning Michael Haneke (so intrigued by the destruction of the middle-class dream that he made his sickening Funny Games twice, once in Austria in 1997 and again in America in 2007), while Sam Peckinpah’s ever-controversial Straw Dogs also gazes unblinkingly at the human capacity for violence and self-preservation when the domestic safety net is torn and the fantasy of civil society dissipates. It’s no surprise that home-invasion films crashed into the mainstream after 9/11, as increased anxiety over domestic security and the unspecified threat of the other translated into disturbing films like 2002’s Panic Room, 2005’s Hostage, 2008’s The Strangers, and 2013’s The Purge, all of which see the normative American family under threat from vicious foes committed to breaking down protective barriers and bringing anarchy to carefully-ordered living spaces. And that is the tension that is so deftly studied in The Gift (and, more salaciously in Knock Knock) – the sense that the protections and certainties of suburban life are a sham that can swiftly disappear, and it may be your own baser instincts that bring this about.

The Gift neatly merges both a looming threat from without with the destructive impulses from within and crafts a particular brand of suburban nightmare. Reimagining the American dream home as the place of nightmares where the sins of the past find convenient physical and mental crannies from which to tear at the delicate fabric of adult life, it’s the kind of film that makes you look at your own history, and your own situation, and ask how secure you really are. And, if we’re looking to Hollywood for an answer, we should probably all be a little concerned.