Halloween – the most wonderful time of the year. And if you’re planning a blood-drenched, horrifying weekend away from which there’s a fair chance you’ll never return, cinema has given us some fantastic examples of the kind of maggot-ridden, demon-infested hellholes you most certainly should aim for. Here are 13 of my favourites… 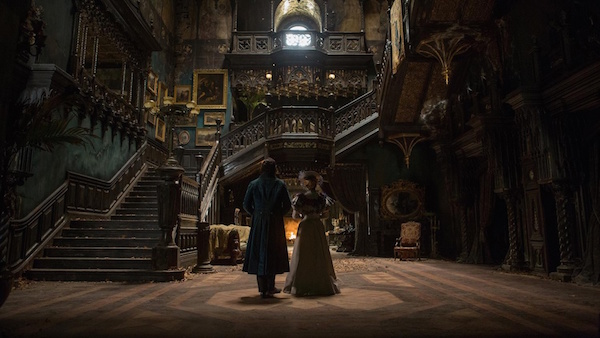 Haunted by the nicest ghosts you’d hope to meet, their futile and sweet-natured attempts at fear-mongering prefigure the appearance of the titular spirit exorcist who can change even the most boring family meal into a hilarious funfair of possession, levitation, singing, dancing and ghoulish circus rides. An AirBnB experience you can only dream of.

Chances of me staying the night – 5/5

Beware of having your latent psychic powers awakened in this blue collar suburban Chicago house, or you’ll spend your time relentlessly agitated by restless spirits and digging up your garden in the search for buried corpses. And you won’t even be able to predict the lottery numbers.

Chances of me staying the night – 4/5

By far the most modernist house on the list, the glass mansion hides in its dungeon-like depths not only some of the most violent and misshapen ghosts to float the earth, but the diabolical Baselius’s Machine which will use the powers of these trapped spectres to give the user infinite evil powers. The kind of home you imagine Rupert Murdoch might have.

Chances of me staying the night – 4/5

How anyone lives in this looming, isolated Cumberland heap is a mystery given it has no roof, blood-red clay oozing through the walls, and screaming spectres at every turn, but at least borderline-psychotic hostess Lucille (Jessica Chastain) might play you some cheerful tunes on her mournful baby grand.

Another beautiful country mansion where everything is most certainly not as it seems. While the borderline-pornographic paintings of Kate Beckinsale might appeal, the restless will-o’-the-wisps, creepy-incestuous parlour games and permanently terrified residential crone might not, and the chances of experiencing unexpected fires and explosions thanks to poor gas fittings is unjustifiably high.

The Carmichael Mansion, The Changeling (1980)

Melancholic professors beware, you’re unlikely to get much work done in this ridiculously large, gothic grace-and-favour, where the resident spirit smashes windows, slams doors and plays with his red bouncy ball. In fact, you’ll spend far more time investigating his cruel murder than you will marking naïve first year essays.

As if the fact that the curtains are almost permanently drawn in this tenebrous mansion isn’t enough, there are the stacks of creepy Victorian post-mortem photographs, rooms full of shrouds, three ominous servants with more than a touch of the night about them, and a perpetual fog hiding all sorts of disturbing secrets. Those poor kids.

An everyday family home deadened with melancholy resulting from the death of a teenager, it’s no surprise that the undead seem to be rearing their heads and letting their secrets be known. Watching the CCTV footage captured in the house is likely to give you a very bad feeling indeed, and make you very unlikely to want to visit again.

Not only does this classically foreboding, isolated pile have all the requisite spooky rooms, rickety staircases and creaky floorboards of the classic haunted house, it also has the ability to draw in the confused, lonely and sad and offer them a spot they’ll never want, or be able, to leave. Best not to try and hold the hand of the person next to you in the dark.

The flooded cellar, oozing zombies, blood-crazed hounds and demonic hands probably wouldn’t help to secure this repulsive hotel a high rating on Tripadvisor, but the real one star clincher is the fact that it sits on the gates of hell itself. Even Gordon Ramsey wouldn’t be able to sort out the gore-drenched problems that brings about.

Chances of me staying the night – 0/5

This seemingly uninteresting Ealing semi hides a smorgasbord of horrible histories, from an evil turn-of-the-century baby farmer to a crazy paedophile eaten by his cats. A dab hand with electrics and with the ability to transmit through television sets, the murderous spirit Pipes is definitely one to avoid, as poor Parky and Sarah Green found to their cost.

As if it’s not bad enough you’ve been chased through the Maryland woods by yattering spirits with a penchant for amateur dentistry, you end up in this dilapidated and rotting shack with décor that would made Ed Gein blanch. And then you meet the spirit of child-murdering lunatic Rustin Parr, who is only too keen to show you the special corner of his basement.

***Get more of Greg in our game-changing new digital monthly The Manual, launching next week!***