Contemporary art gallery Lights of Soho does what it says on the tin – with more than a bit of panache, might we add. Located on Brewer Street in the beating heart of the city, it focuses solely on light installations. With a member’s lounge acting as a cultural hub for London’s creatives, this home of creative neon and light art formats is now extending its inaugural open submission show to the more illuminated artists of the capital. New and established artists alike will have the chance to enter their light work for Signs That Say What You Want Them to Say, an exhibition guest-curated by the illustrious Robert Montgomery.

Montgomery uses text and light in his work, inspired directly by Roland Barthes and Guy Debord. His work borders on the anarchic, replacing the everyday messages of drive-by billboards with powerful, thought-provoking poetry that is simple in language and complex in meaning. He describes his long-rooted interest in commercial neon signs as stemming from family holidays, and takes pleasure in coupling them with ‘something as whimsical and useless as poetry.’ Montgomery’s shows have been held in India, Seattle – and Soho. We chatted with him about his views on light art and London’s emerging talent. 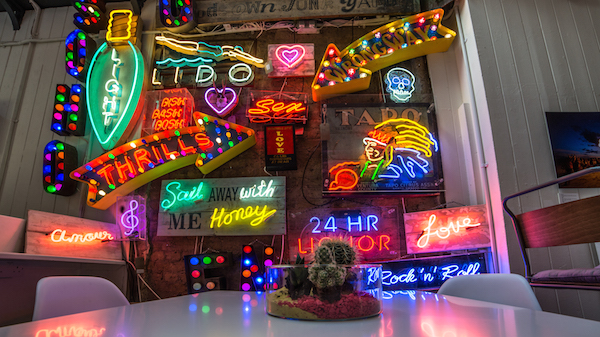 You began your career graffitiing billboards and still do to this day. Do you ever consider it graffiti vandalism? No, I always consider graffiti freedom of expression. I don’t think our streets should be filled with only corporate messages. Graffiti is often community messages and graffiti can be poetry. There’s an interesting new book called Street Messages by Nicholas Ganz which my work appears in. It documents poetic/ironic graffiti globally.

What appeals to you about refurbishing urban components like billboards?
Well, billboards dominate the discourse of our urban environment so much, but I think the limited discourse on billboards is psychologically oppressive. They injure our basic childlike instincts towards kindness and magic. With my work, I wanted to break that commercial language with a more internal, vulnerable voice, in a place where that dominant language normally lives.

Do you write your poetry in advance of creating the physical art, or is it something that works concurrently? I trained as a visual artist but now yes, I have integrated the way I think about form and the way I write into one pretty unified process. I often write my poems in drawing software. This approach comes from concrete poetry, which artists like Ian Hamilton Finlay and Lawrence Weiner have explored too. 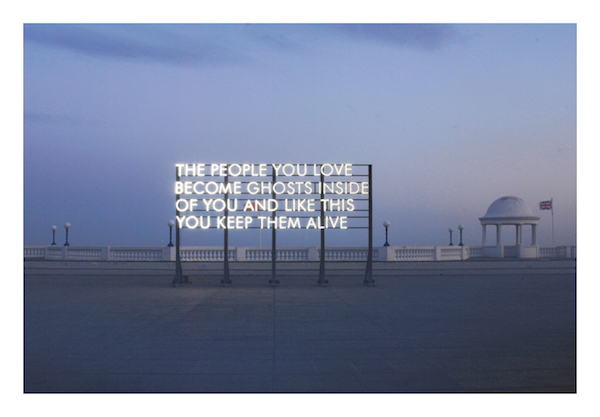 Ahead of the open-submission Lights Of Soho exhibition, is there anyone who stands out to you? I really like the project, 12 Months of Neon Love by Richard Wheater and Victoria Lucas, which they did on top of a building in Wakefield in Yorkshire. The Paris-based artist duo Ruiz Stephinson are making some new neon work which I really like also, which is showing at Galerie Nuke this month.

What will you be looking for when curating this exhibition?
I think I’ll be looking for work that’s poetic or ironic or has pathos, but not necessarily just text work like mine. I’m interested in work that pushes the boundaries of what ‘light art’ is too – I’ll be interested in proposals that aren’t obvious.

Comparisons could be drawn between your work and the writing of the beat poets. Is there an era of writing you feel drawn to?
When I was a kid I wanted to be a poet – an old-fashioned poet like André Breton or T.S. Eliot or the Beat poets. But I realised there was no way for me to do that without using billboards and the internet as mediums. The poetry of my generation will have to be as in-your-face as billboards and deal with the language we use on social media. You have to write with modern cadence. And engaging with those languages doesn’t reduce the power of poetry. Anyway, poetry isn’t actually about language, it’s much more a defence against language. Poetry chases and threatens ordinary language. It is the last line of defence against ordinary language consuming the magic of the world.

Where do you see the London art scene heading? I’m worried about London actually, I think its getting harder and harder for young artists to survive and work here. This year I’ve been a visiting artist at The Slade, and what really struck me is that art students are now often working full time jobs at the same time as studying. They have £9,000 a year fees to pay and increasingly exorbitant London rents, so they are really struggling to get studio time. That can’t be good for our cultural health as a city and it can’t be good for the cultural sector of our economy a country. We might find our young artists make an exodus for Berlin, or Warsaw or Athens, unless something is done to address the ridiculous cost of rents. Platforms like the ones Hamish Jenkinson is providing with Lights of Soho are helpful though.

Should there be a hands-on element in contemporary art?
It’s nice to keep some element of engagement with your own hand. I keep hand-painted surfaces on my wood-cut panel pieces and the watercolours I make are very tactile things, but I wouldn’t criticise another artist for their process.

If not an artist, what would you be?
Oh god, I’m not really sure. If I had a proper conscience I’d work for Greenpeace. That’s probably a much more noble vocation.

Signs that Say What You Want Them to Say will run from 8th October to 21st November, with further exhibitions and events to be announced.