Fragile + Force: The Rise And Rise Of Sally Hawkins 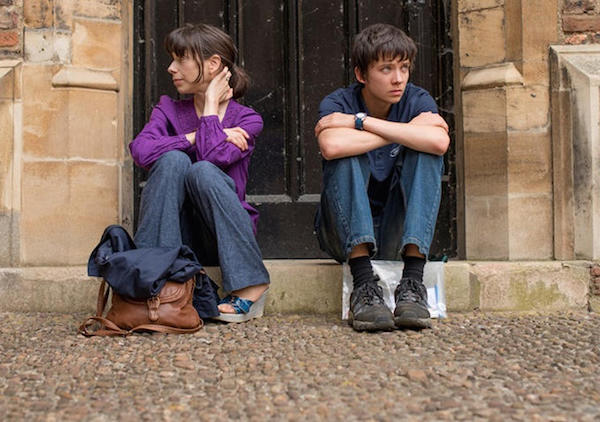 X+Y is a British coming-of-age drama about Nathan, an autistic boy, possibly a mathematical genius, who leaves his mother and tutor behind to go to Maths camp in Taiwan ,where suddenly he is no longer the smartest – or weirdest – person in the room. Like the outstanding National Theatre adaptation of The Curious Incident of the Dog in the Night-time, X+Y doesn’t sugar-coat the difficulties of living on the spectrum, or of living with someone who’s living with being on the spectrum. At times it’s a tough watch, at times its funny and at times its deeply moving.

The emotional lynchpin that keeps the whole enterprise on track, overcoming an unconvincing finale, is another extraordinary performance by Sally Hawkins, one of our greatest exemplars of emotive acting. As Nathan’s long-suffering and lonely mother (her husband is killed in a bruising car crash at the film’s opening), Hawkins is at once tough, giving, restrained and, for her own sanity, loving – in spite of the fact that her relationship with her son is a deeply unbalanced equation, with the solace of a hug or even a smile a distant pipe dream. Hawkins nails each of these discordant characteristics, in turn and at once; her wavering smiles, moist eyes and self-protective gestures reveal a heart-breaking inner world of hope and hurt every moment that she’s on screen.

It’s no surprise that Hawkins exudes such seemingly effortless control over such a fragile character. She has refined her talent with two of the most celebrated “actors’ directors”, Mike Leigh and Woody Allen, both unforgiving taskmasters who initially gave her minor parts before framing much grander narratives around her unique skills.

Her first film role was for Leigh in his punishing 2002 estate drama All or Nothing, while two years later in his 2004 Golden Lion-winner Vera Drake she nailed a larger, tougher, part as an upper-class rape victim. Then she caught Woody Allen’s eye, and he cast her in his weak 2007 thriller Cassandra’s Dream, in which she struggled to overcome lacklustre scripting and a silly plot as Colin Farrell’s shrill girlfriend. In all three of these films, her promise was clear – those expressive features, that bird-like internal restlessness, that ethereal beauty. Her ability to imbue a potentially generic character with warmth and compassion elevated her well above her position on the cast list.

In 2008, Leigh helped guide Hawkins to what may end up her career-defining performance, as the incurably optimistic Poppy in his disturbing comedy Happy-Go-Lucky, while in 2013 she came thrillingly close to an Oscar in Allen’s compellingly relevant Blue Jasmine, the soothing and grounded yin to Cate Blanchett’s raging, show-stopping yang. In both films Hawkins demonstrated an inherent understanding of her characters – their foibles deftly articulated but never exploited. Happy-Go-Lucky in particular is a treat for the uninitiated; Hawkins’s fidgety, all-in performance is a masterclass in joie de vivre.

Since Blue Jasmine, two of Sally Hawkins’s four films have made a staggering $770m at the worldwide box office. And though while she was ill-served in Gareth Edwards’s plodding Godzilla as a throwaway scientist, her performance as Mary Brown in the quintessentially British fable Paddington offered a neat snapshot of Hawkins’s forte: a gentle and compassionate demeanour behind which flows inner strength and courage of conviction, even in the midst of deep damage or overwhelming odds. In a goofy family comedy like Paddington it’s a great achievement to ensure that all the layers shine through.

Now Hawkins has hit the global stage with force – an Oscar nomination and two blockbusters should bring an delicious smorgasbord of potential roles – it feels that national treasure status may already be on the horizon. She certainly has the fantastically British self-doubt and lack of ego that we so willingly embrace. And there’s still so much that she has to give.

I would love to see her in a tough thriller in the Prime Suspect mould with a meaty character and bloody plot to for her to really chew to the bone. I’d also love to see her take centre stage in another Leigh film and disappear into a character that allows her to run her gamut of emotional beats. And I’d like to see her anchoring a classy haunted house film in the mould of The Haunting. Mostly, I’d just like to see much more of Sally Hawkins, and I rather suspect I will.