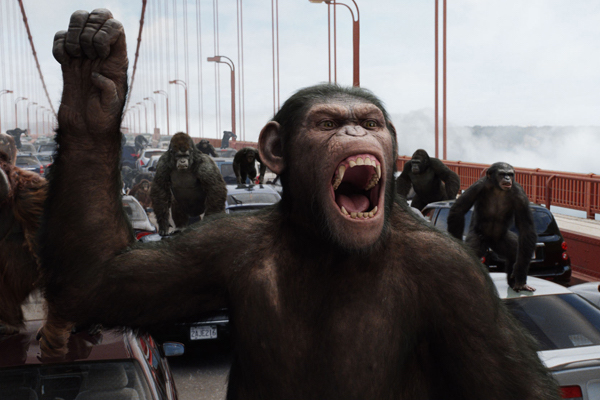 In 1985’s Back to the Future II irritating punk Marty McFly travels to the distant future of 2015 where cool teens zip around on hoverboards, a holographic shark looms over cinemas, and the skies throng with flying cars.

In Blade Runner, rereleased in cinemas this year, moody Rick Deckard hunts replicants in hellish 2019 Los Angeles, incapable of telling apart flesh-and-blood from synthetic. And in Terminator Genisys, the most recent disappointment in the once-great franchise, gormless hero Kyle Reese teleports between 2029 and 1984, eventually arriving in 2017 San Francisco where the events that precipitate Judgement Day are in process, something to do with a giant Apple-like software system that will eventually crush humanity.

We’re living in, or fast approaching, the future we’ve been reaching for; and it’s not what we thought it would be. Sure, we can use our debit cards to travel on the Tube, pay for our coffees by flashing our phones, and have an eerie voice talk us through the directions to a countryside pub that’s got four and half circles on TripAdvisor, but do we have the memory transfer devices Katherine Bigelow’s bruising Strange Days thought we’d have by 1999, the self-aware robo-slaves that Bicentennial Man gave us in 2005, or the time travelling body snatchers Freejack told us we’d see in 2009? Sadly not.

Understandably, our sci-fi is getting impatient, and no longer looking so far into the future.

This year’s present-day-set Ex Machina took Domhnall Gleeson’s nerdy programmer to a top secret location where tech guru Oscar Isaac introduces him to his latest creation – a super-advanced artificial intelligence. Gleeson is charged with putting the robot, an uncannily alluring Alicia Vikander, through the Turing Test and quickly finds it intellectually impossible to prove it isn’t sentient, and difficult not to develop romantic feelings for the mass of blinking lights and sprockets. 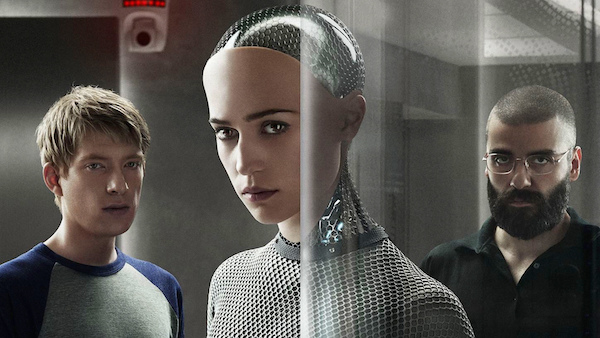 The idea that there are hidden advances out there now well beyond anything we plebs have seen makes for appealing narrative, packaged with conspiracy theories, technological angst and dystopian yearnings. And Isaac’s brooding genius is a neat representation of the new breed of techno-celebrity – Jobs, Zuckerberg, Page – obsessive, insanely rich and geeky with borderline personality issues – but nevertheless a magnet for Vanity Fair, Wired and other relentless botherers of our Ozymandian overlords. The most interesting thing about Ex Machina, perhaps, is that it barely seems like sci-fi at all.

Neill Blomkamp’s grimy Chappie, released in March, isn’t anchored in a particular year, but its crime-ridden urban squalor isn’t a huge leap from modern Johannesburg and again deals with secretive AI experiments and self-awareness, this time mixing in contemporary concerns over military appropriation and misuse of ostensibly non-violent technology.

And Channel 4’s critically acclaimed new drama, Humans (the star of which, Gemma Chan, gives an exclusive interview in the latest issue of PHOENIX)  finds artificial intelligence infiltrating suburban homesteads in a parallel present which again takes sci-fi tropes – existential angst, creeping threat – and plonks them squarely in a completely recognisable modern context, an acceptance that we haven’t necessarily reached where we thought we would be, but we damn well should have, and this is what it might look like. And it’s not good. Only a couple of days ago another major tech-celeb, Hyperloop-imagineer and PayPal founder Elon Musk, joined with Stephen Hawking and over 1,000 mega-boffins to warn against exactly the ambitions set out in Chappie and its ilk, ignoring the irony that’s their technological leaps-and-bounds that will make all this possible.

Musk’s spiritual home of San Francisco is the American urban signifier of the kind of technical advances that sci-fi movies are so obsessed, entranced and terrified by, so it’s no surprise that that it has become the city of choice for movie designer disaster.

It used to be de rigueur that it would be the Chrysler Building crashing down, the Empire State pockmarked by asteroid collisions, the Statue of Liberty decapitated by rampaging beasts, but since the Bay Area and Silicon Valley became synonymous with tech evolution, there has been a marked shift to the west.

With big names like Google setting up shop in Mountain View, Apple in Cupertino (which sounds like a Two Ronnies joke), and Facebook in Palo Alto, San Francisco has become what New York was in the 80s and 90s – a hotbed of cash, cocky showmanship and charisma. It’s no coincidence, given the nature of this new money and celebrity, that scientific advances cause the primate Golden Gate carnage in 2011’s Rise of the Planet of the Apes, that Khan crashes his spaceship into the futuristic Golden City in 2013’s Star Trek: Into Darkness, or that 2014’s monumentally awful Transcendence sees Johnny Depp’s AI-obsessed boffin take over the world from his top-secret California lair.

Perhaps the most potent example of the ambiguous relationship movies have with the Golden Gate City is in Pixar’s new, marvellous Inside Out. In it, 11 year old Riley’s inner emotions are exposed and reshuffled as she moves from homely, comfortable Minnesota to grim, gloomy San Francisco, losing her childish innocence and colouring even her core memories of childhood with an ineffable sadness. The shift from childhood to adulthood and the discarding of childish notions and plans results in a very personal kind of internal dystopia as Riley’s personified emotions try to stop her internal, personality-defining cityscape from collapsing around them.

But the change is unstoppable, even if not as devastating as it seems. It’s ironic and perhaps insightful that Pixar, of all studios, equates San Francisco with such painful evolution, given it is their home – a place where childlike love of story, colour and emotion clashes with the adult world of box office receipts and commercial tie-ins.

Like with so many things (religion, politics) Hollywood has a confusing relationship with technology – embracing and advancing it on the one hand, while promulgating an abject mistrust of it and its destructive potential on the other.

Given Silicon Valley will likely be the birthplace of the next step in our tech evolution, we can most certainly expect much more investigation into its secrets and hazards and much more trashing of the Golden Gate Bridge by nanobots, drones, Godzilla-alike beasts and other wonders and horrors.

But then we expected those hoverboards too, and where are they?