Far from the sweet calypso and soca tunes of Trinidad, God Loves The Fighter is a new film that bangs its steel drums. Boasting an all-Trinidadian cast, the film throws us into the heart of Laventille’s gritty slums with a realistic portrayal of life and death in the murder capital of the Caribbean. A tale of street struggle and endurance that’s earned comparisons to cult films City Of God and The Harder They Come, it doesn’t hold back on the brutality of a hand-to-mouth existence, yet there’s a tender side, particularly in the bittersweet portrayal of the friendship between Dirk and ‘Chicken’. Themes of religion and prostitution play out against a supercharged dub reggae soundtrack. Having already won the Curacao International Film Festival Rotterdam’s Yellow Robin Award, this is a roaring carnival of a movie that punches through the pain. 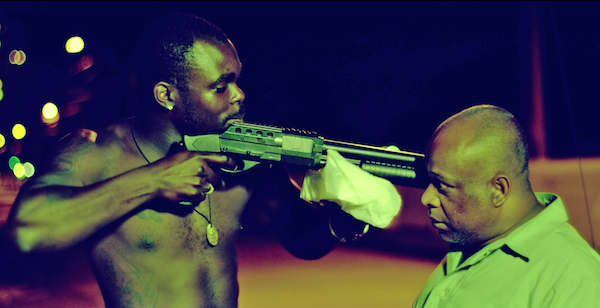 With God Loves The Fighter arriving in London this week at the East End Film Festival and online at FilmDoo.com, PHOENIX chatted to director Damian Marcano about his debut feature film.

“Write what you know, shoot what you know. Then, as an independent filmmaker, you get to tell an unpretentious story that can seem very real to a lot of people.” Drawing from his memories and experiences of growing up in Trinidad, Marcano has put his write-what-you-know policy into practice with his vivid and immersive crime drama.

Spending much of his childhood in Laventille, east Port-of-Spain, filmmaking was not the first medium that Damian explored. “I’m a kid from a very poor place that grew up painting. Drawing was my one way to get out.” These early experiences proved motivating. “In the schools that I went to in Trinidad as a kid, sometimes we’d have these drawing contests. I went to Richmond Street boys’ school and, in the morning, you could have a great drawing and after lunch there’d be another guy who’d have something better than you. Art is supposed to inspire. We were all poor kids. Our dads were taxi drivers, if our dads were around. Most of us just had our mother and we all came from the same socio-economic background but we had a pen and a paper – with these you could achieve anything.”

Damian moved to the US at age twelve but, as it turned out, inspiration was back in Trinidad. “If you write what you know and you get that out, I don’t think people can question that. I began to pay attention to home a lot more and, when I’d look at home, most of my friends were going through what was in God Loves The Fighter and that unfortunately was what I knew – and it sucked. I’d take guys to dinner or we’d go do something and you’d drop them off as far as you can down this lonely road to get home and you’d wonder, am I ever gonna’ see this guy again? Is he gonna’ be here when I return?”

The film took further shape through talking to friends and colleagues in the city. “In Trinidad we ‘lime’ – I don’t know if you know that term over there – but we lime a lot and liming is just a couple of people who get together, have some drinks, talk, smoke, you do whatever, you just chat. I think that is what kept the authenticity. A lot of West Indian people in America, when they see a Caribbean film, they feel it’s not authentic. They feel it’s so watered down. So I was able to look at the new version of myself, the guy who had left Trinidad, and say ‘okay, I don’t want it to be anything like that’. I want it to be one hundred percent raw. I’ve really got to examine these guys as a physical specimen. I have to shoot the local body in a different way.”

Nonetheless, current situations limited the extent to which Marcano could draw directly from real life. “We can’t tell all the stories because most of these guys still live there and we never wanted to do anything that would lead to lives being lost. We’ve had cast members shot and some of that stuff happened because of jealousy. I don’t try to make too much of it because I don’t want to fan flames but there were three cast members that I had and one guy still had shrapnel in his chest, the other one got shot in the leg and the third guy got a gun jammed in his face. I left to go to the studio and this all happened in the space of an hour. During this film that’s what always kept it a hundred percent ‘we gotta’ finish’. I jumped off the cliff for those guys and I had no idea whether I’d hit water or rock at the bottom. So it was an amazing process.”

Damian has been pleasantly surprised by the film’s international reception. “It’s always interesting when I go to places and tell audiences I really made this for 16 to 25-year-old guys where I’m from. I never thought anyone else would ever watch the film so, when I go to a place like Munich and no one there looks like 16 to 25 from where I’m from, it’s amazing to see these packed audiences. There was one audience member, I believe in Holland, who said he thought that this was the most beautiful depiction of island life he had ever seen and I’m so glad that he got that.” 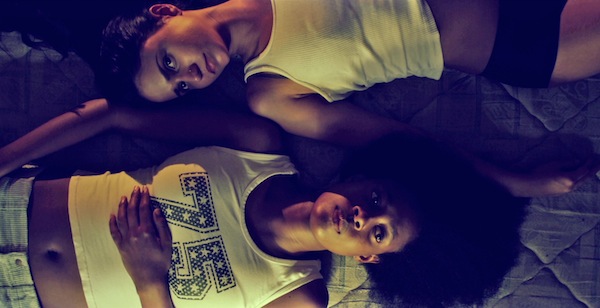 But the film may have already made an even greater impact in its region of origin. Damian recalls how Storm Saulter, the Jamaican director of the award-winning crime drama Better Mus Come, attended the premiere of God Loves The Fighter. “He stood up and he took the mic from the moderator and he just addressed the audience and said, ‘I hope you guys realise what has happened here. This is a very important day, not just in Trinidad cinema but in Caribbean cinema.’ I think he saw someone else who maybe jumped off a cliff even higher than the one he jumped from.”

God Loves the Fighter premieres at the Rio Cinema, July 7th, for the East End Film Festival, and online at FilmDoo.com