Rihanna, Bella Hadid and Kendall Jenner have all been spotted at strip clubs – and our intrepid correspondent is a regular visitor. But why?

In a fit of drunken Facebooking in Vegas, I decided to share with my ‘friends’ that I was spending the early hours of my birthday in The Hustler Club, with a beautiful brunette grinding her magnificently engineered breasts into my face as I slipped dollar bills in her soon-to-be-removed La Perla thong. Cut to a few hours later, waking up with a banging headache and my clothes reeking of stripper perfume, I was greeted by a mixture of comments on my post ranging from the curious; “How much does a lap dance cost…?”, “Oh my God…did you actually see her VAGINA too?”, to the confused; “Whaaaat…Why do you need to see tits you weirdo…? You’re a straight woman!”

My hungover responses were as follows; $40 for a dance lasting the duration of one song; yes I did see her vagina (not an errant pube or ingrown hair in sight…clearly there had been some expensive laser hair removal involved down there); and yes, as a straight woman, once in a while I do like to see a pair of tits that are not my own.

Luckily, it seems that I’m not the only titty-bar-loving weirdo on the block. Earlier this year megastar model besties Bella Hadid and Kendall Jenner were seen partying in the now famed Paris strip club Pink Paradise. Similarly, only a couple of years ago the paparazzi gleefully snapped away as Rihanna strolled out of London’s very own Stringfellows in the wee small hours of the morning.

So why is it exactly that women go to strip clubs? In a quest to find answers, I find myself in a strip club in Holborn, where I get chatting to 24-year-old dancer Ivory over some pricey drinks (10 bloody quid for a bottle of beer!). “I see quite a lot of women in here, particularly at weekends,” she informs me. “Mostly they are here with their boyfriends, or husbands, but you do sometimes see groups of girls together, just here for a laugh, and to see what it’s all about. Gay or straight, women often get turned on by admiring the female form.” 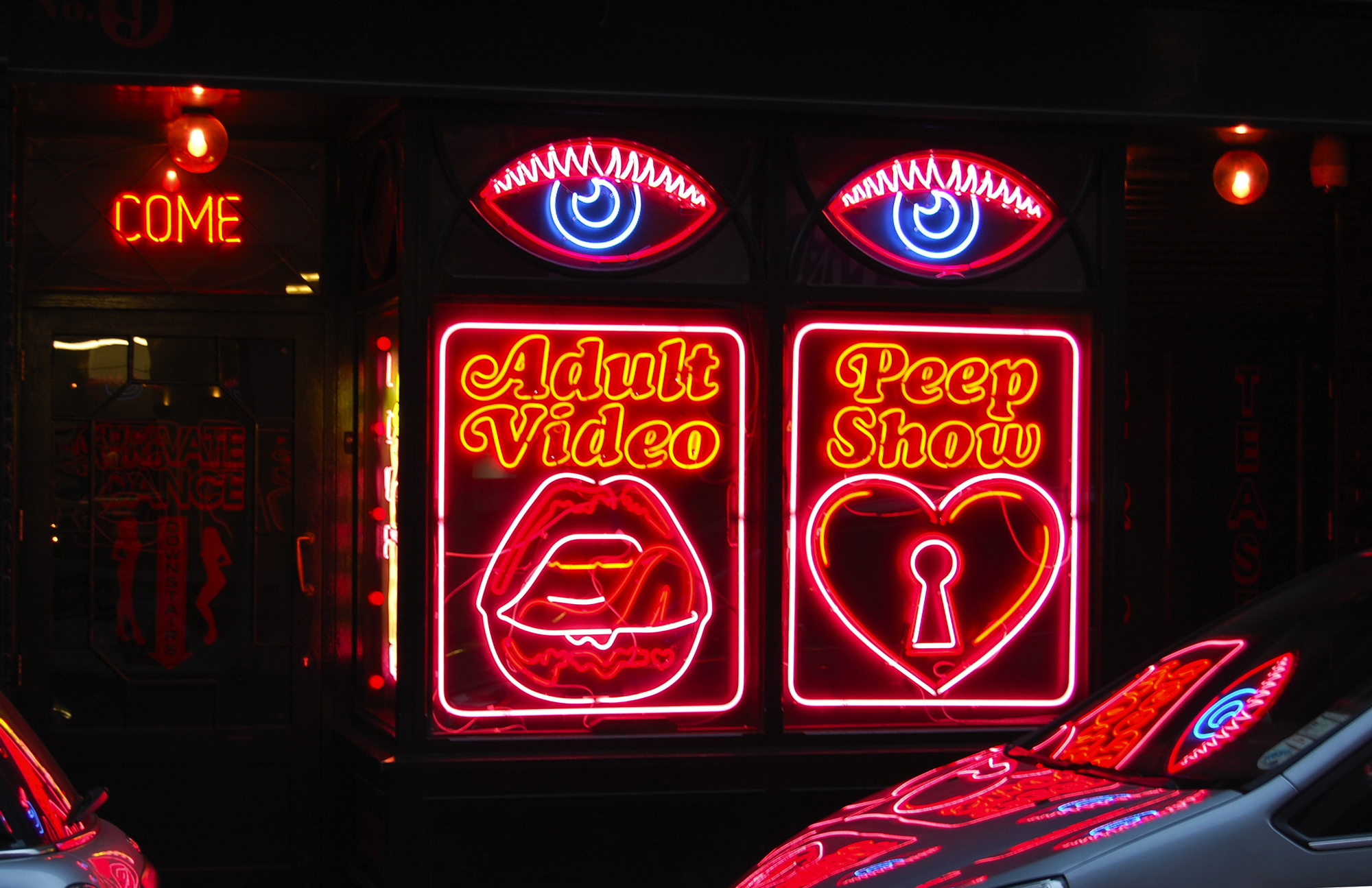 Jealousy really isn’t an issue as I watch women (almost always of model proportions) performing all kinds of impressive naked contortions upon my boyfriend, and I have no doubt that watching me in the company of an attractive naked woman fulfils some sort of cliché male fantasy for him.

After a bit of flirty banter, we negotiate a very reasonable fee for a private dance, and in a curtained off area, as she is expertly peeling off her clothes from her incredibly toned body, we start talking about some of her less positive experiences with female customers. Apparently, she was dancing for a couple, when all of a sudden the girlfriend; “…went off on one when I took my bra off”. According to Ivory, very, very occasionally there are Jerry Springer-worthy outbursts of jealousy such as this, but on the whole, most couples find it a turn on and regularly go to strip clubs as some sort of extended foreplay.

I must admit that my boyfriend and I are one such couple. After boozy nights out we will often stumble into a strip club, and will either have a shared lap dance or separate ones depending on our mood and the amount of cash we have on us. Jealousy really isn’t an issue as I watch women (almost always of model proportions) performing all kinds of impressive naked contortions upon him, and I have no doubt that watching me in the company of an attractive naked woman fulfils some sort of cliché male fantasy for him.

Equally, when I used to work in a mostly male profession, and late nights out ended up in the city’s many ‘titty haunts’, I was neither aroused nor particularly fussed by my male colleagues and friends wanting to go to such places. I would often just chat and hang out, as if we were in any other regular pub.

Back in Holborn, after Ivory has completed her performance and sashayed her way over to the VIP area, I spot a group of three women who have just entered the club, downing shots at the bar. We get chatting and it turns out that two of them are celebrating their birthdays, and were checking-off one of their ‘bucket list’ items of attending a strip club. They talked about it being something that they wanted to do as it “…felt a bit naughty…Like something well respected women like us shouldn’t be doing!”. They also pointed out that it was quite nice to be in a club where men “don’t bother trying to hit on you, as they are too busy looking at the strippers!”

By now the ladies are several shots in, and talking of clubbing together to blow several hundred quid on entry to the champagne lounge. I make my excuses and leave, as I’m not quite sure my credit card wants the party to continue for that much longer. I must admit, I have never been to a strip club with just other women for company before; and at least with this group, it seemed that perhaps they were more keen on the booze than the boobs. 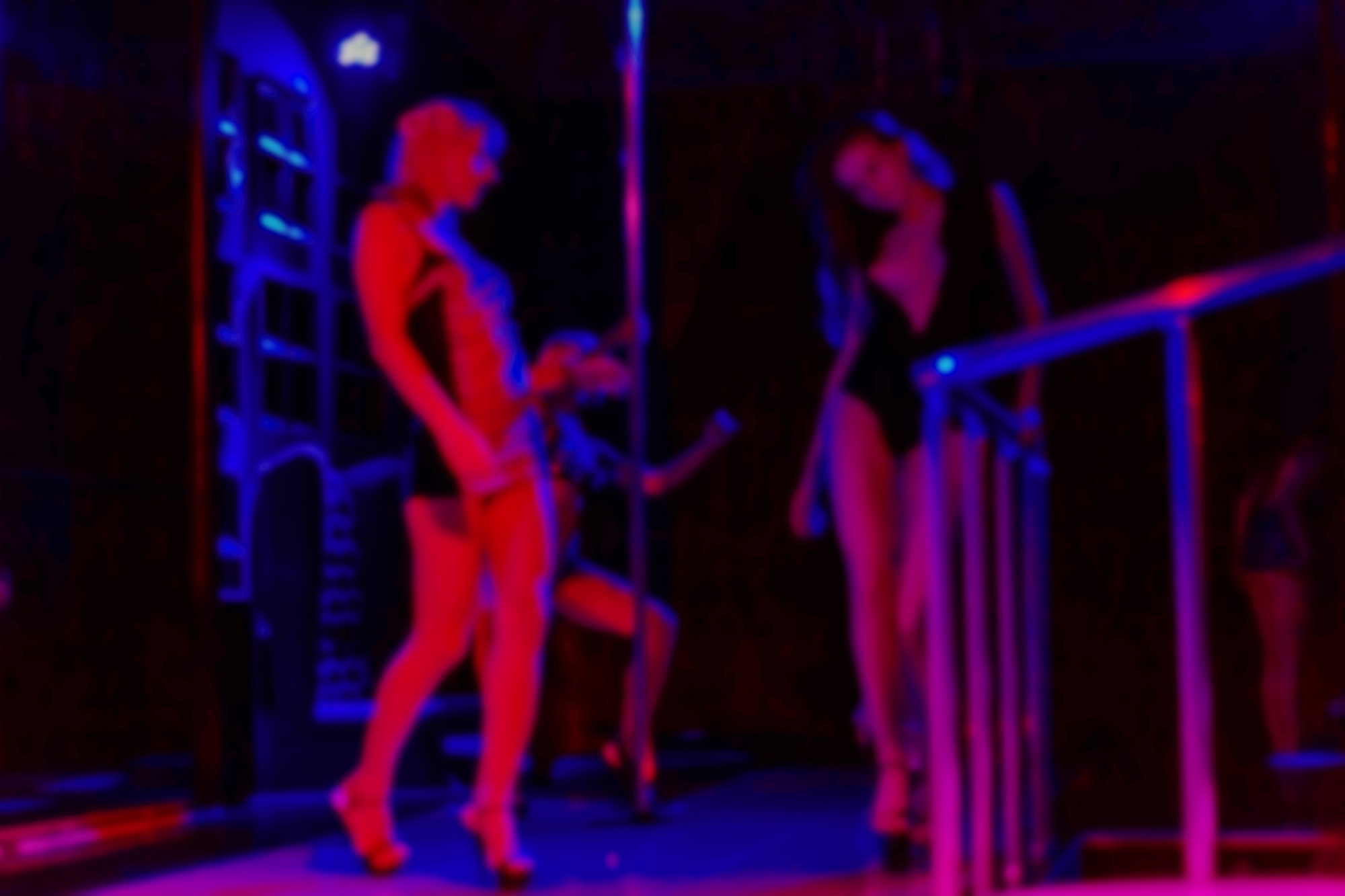 “It’s all about the power,” claims one dancer. “They get to come in here and act like lads, spending their money on pretty girls, whilst at the same time, they learn all about being sexy from us, so they can go home and try it on their boyfriends.”

On my way home, I meet up with my boyfriend and decide to head over to a nearby pub, where the strippers perform fully nude routines in between two large screen televisions showing the latest football action. It’s rammed in here, and the dancers elegantly manage to squeeze their way through the crowd of punters, clutching a pint jug of coins, collecting £1 off every man before they get on stage to perform their routine. Interestingly, they don’t charge me, or any of the other women. When I ask why not, there appears to be no particular reason apart from it being ‘house policy’.

I manage to get speaking to another couple who are there in the pub. It was their first time, and interestingly the man was taking his wife there “so that she would know what kind of thing goes on in here, just in case I ever have to come here with the blokes from work.” The wife doesn’t look too impressed, and I can only assume that this wasn’t really her idea – or her cup of tea. I feel myself about to offer her some unsolicited relationship advice, but luckily decide to back off and head to the ladies’ loo.

The sinks are crowded with strippers piling even more makeup on their faces, and a cloud of hairspray engulfs me as I try to reach the hand dryers. I chat to Jackie, whom I noticed earlier twirling her naked body in a very acrobatic manner on the pole. She proudly tells me she has already given two private dances to a pair of women who came in earlier that evening. “It’s all about the power,” she claims. “They get to come in here and act like lads, spending their money on pretty girls, whilst at the same time, they learn all about being sexy from us, so they can go home and try it on their boyfriends.” 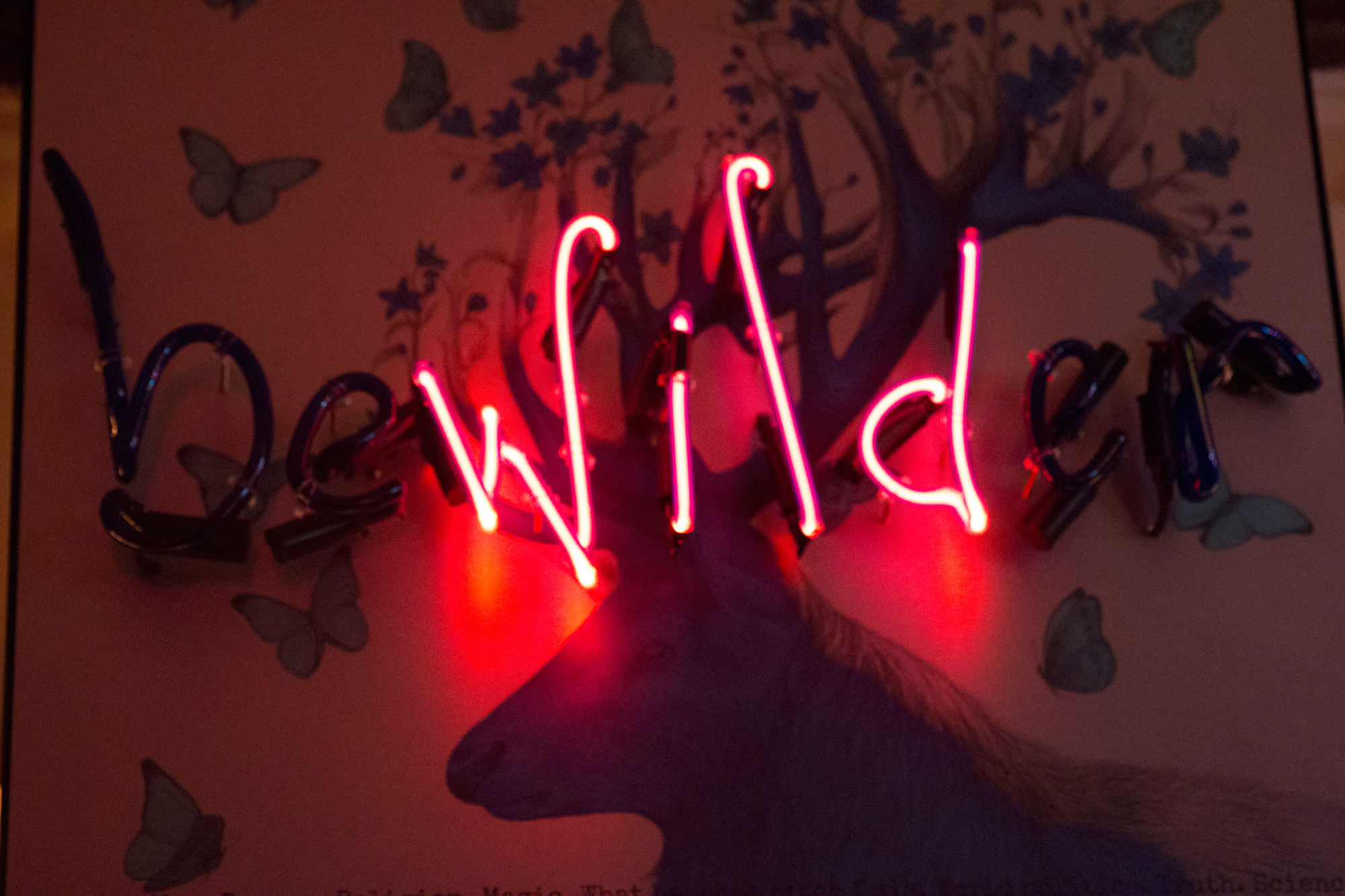 Talking of boyfriends, I was reminded of mine, who I had left on his own for nearly half an hour now – and I wasn’t sure I had left him with enough pound coins to survive. Feeling lightheaded (not from all the sexual excitement, but rather from all the hairspray fumes) I eventually locate him trying to avoid the semi-clothed pound collectors, and we decide to call it a night.

At the end of an evening full of beer, breasts, breasts, and more breasts, I’m not sure there really are any definitive reasons why women go to strip clubs. And I’m not really sure that there needs to be. Perhaps Jackie (my new found stripper friend) described it best when rolling her eyes and proclaiming; “I don’t mean to sound all Cindy Lauper circa 1980-whatever, but girls really do just wanna have fun…”

Stringfellows
No longer just a haunt for city boys entertaining out-of-town clients, and boozed-up stag dos (although be prepared to expect the latter on a weekend evening), Stringfellows, despite being known as London’s most famous ‘Gentleman’s club” attracts a relatively mixed crowd, so for a raunchy date night head to the VIP booths for a couples lap dance. The dancers, referred to as ‘Angels’, make their female guests feel thoroughly at ease, and rest assured they know how to sin in the sexiest of ways.
16-19 Upper St Martin’s Lane, Covent Garden, London, WC2H 9EF

Ye Olde Axe
Definitely more of a strip pub, than a strip club, and certainly notorious on the strip club scene, Ye Olde Axe is a fine example of a traditional East-End boozer, attracting city types, mixed groups and couples, all headed here for some late night revelry. Despite often being packed out on Thursday and Friday nights, there is still plenty of opportunity to have private time with any of the numerous dancers, yet for those not quite so eager to get up close and personal, it’s also a rather fun place to get pissed.
69 Hackney Rd, London E2 8ET

Secrets
Describing themselves as ‘always welcoming’ to female customers, and with the added bonus of staying open until 3am, Secrets in Holborn is a great way to finish off an evening in style. A large club with bling-tastic decor you would only ever expect to find in a strip club, with plenty of cozy, secluded alcoves. For those willing to spend some serious cash there is an even more exclusive candle-lit ‘champagne’ lounge, for private dances away from the prying eyes of other customers.
3 Grays Inn Road, Holborn WC1X 8HG plus other locations in London

23 Paul Street
Formerly a place where gold price fixing meetings took place in the 1920s, the present day 23 Paul Street caters to the most discerning rascals and rogues, eager to experience the differing levels of naughtiness that the house has to offer. The club also hosts occasional women only nights for ‘girls who like girls’, and offers a refuge of old world chic where you can indulge your playful side. Start the night sipping on some seriously strong cocktails in the former bullion vault, before ascending to the hidden rooms to find the titillations that await you on the second floor.
23 Paul Street London, EC2A 4JU

Sunset Strip
A Soho institution for over 70 years, Sunset Strip sees a variety of tourists, business people and couples pass through its doors on any given night. This, combined with the exceptionally friendly staff, makes it one of London’s more welcoming strip clubs. As well as the private dances, a theatre style nude show takes place throughout the evening, and with drinks costing only regular pub prices, unlike the ladies taking their clothes off, your bar tab won’t have your eyes popping out of their sockets at the end of the night.
30 Dean St, Soho, London W1D 3RZ