Who Is Maisie Peters? Meet Ed Sheeran’s protegé as she releases her debut album ‘You Signed Up for This’ on Gingerbread Man Records

The artist has gone from busking the streets of Brighton to over half a billion global streams to date, sold out headline shows in both the UK and US, and support from famous fans such Taylor Swift, Phoebe Bridgers, and Sam Smith.

Don’t be fooled by her doe eyes, Bardot fringe and petite 5’1’’ frame, Maisie Peters is tougher than your average pop star. But then, the 21 year old from Brighton has packed a lot of growing up into the last four years. Her new album ‘You Signed Up for This’, set for release on August 27th is an impressive debut that relishes the album format over 14 tracks to document her coming of age, inviting the listener into her private world, like a reader stumbling across a young woman’s diary of confessions. 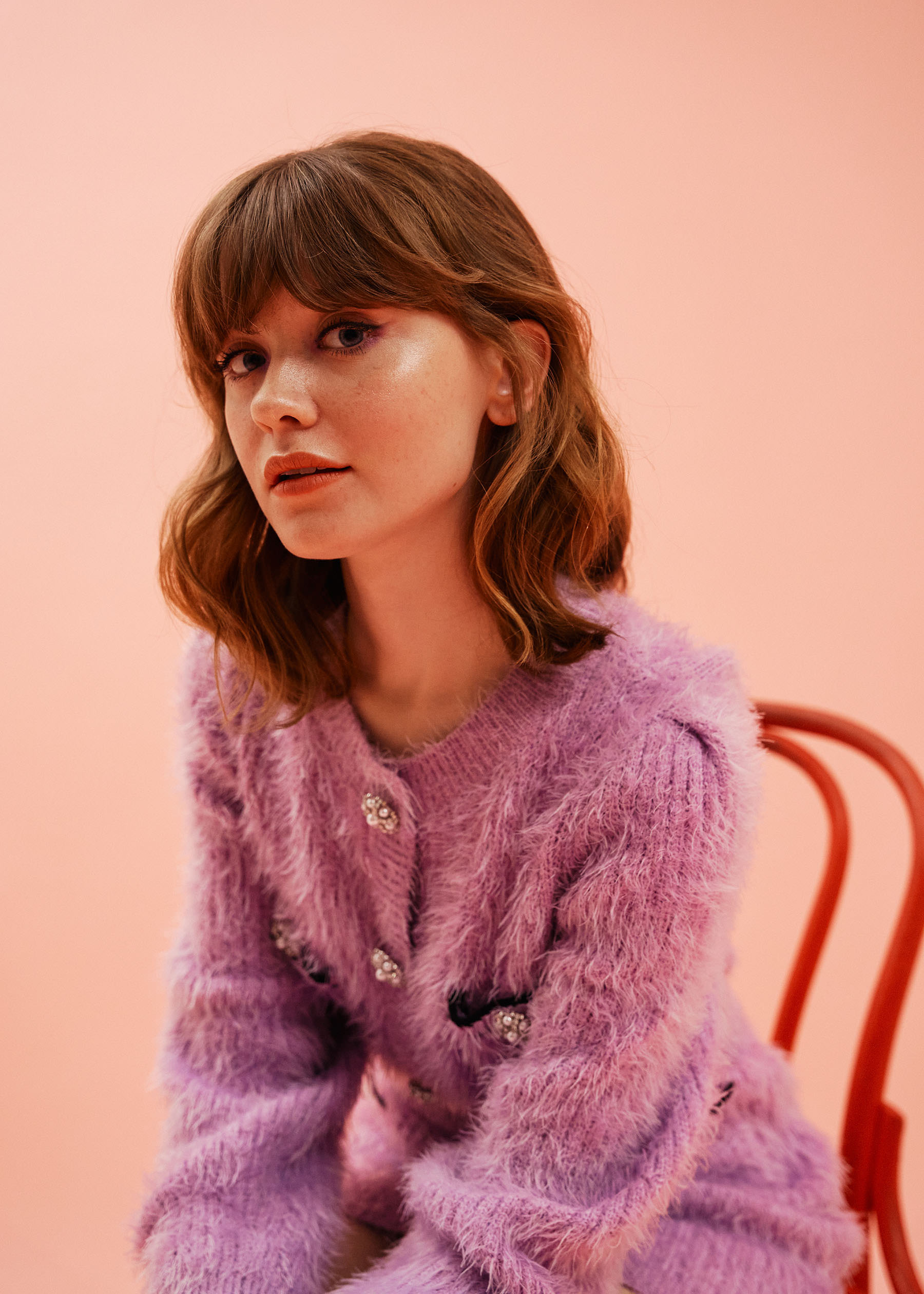 As we shoot the cover, she explains that the album has two themes to it: “I think one half of it feels very heady, and teenage, and romantic, and dramatic. And the other half feels a little bit more grounded and based in realism. The sort of that coming of age realisation of finding that people aren’t how they say they are, and life isn’t fair.” Her keywords for the album are, “nostalgia, and romanticism, and then sort of like resentment at the same time.”

Surprisingly, Peters is not the hopeless romantic that her music might suggest. She looks aghast when I ask if she considers herself to be a romantic, “Absolutely not!” She laughs. “I feel like that’s more of something I explore musically. I also think the music that I love, that I grew up with, is quite romantic. You know I’m a big Taylor Swift fan – the Taylor Swift universe is the most romantic place in the whole world.” She refers to herself as “the biggest Swiftie in the whole world” and feels validated that her “inspiration” was finally recognised at the Grammys in 2020. “I’ve really grown up with Taylor as a really important person in my life, musically.” It was a big moment for her when Swift namechecked Peters’ music online. “When you know that she knows who you are, even vaguely, you do sort of like slightly keel over and like pass out.” She smiles.

It was Swift who originally inspired her to pick up a guitar aged 12, (“I wrote songs pretending to be Taylor Swift for, like, two years”) which led to performances at local beer festivals, singing competitions and busking. She was an early adopter of Youtube, where she was scouted by her manager at the age of 15 or 16, she can’t remember exactly. “I was at school but I was also sort of making music and doing writing sessions and running around London trying to figure out what I wanted to make and do, and just saying yes to everything and being everywhere. And I’ve pretty much done that until writing this album really, and up until now.” She pauses to reflect how far she’s come. 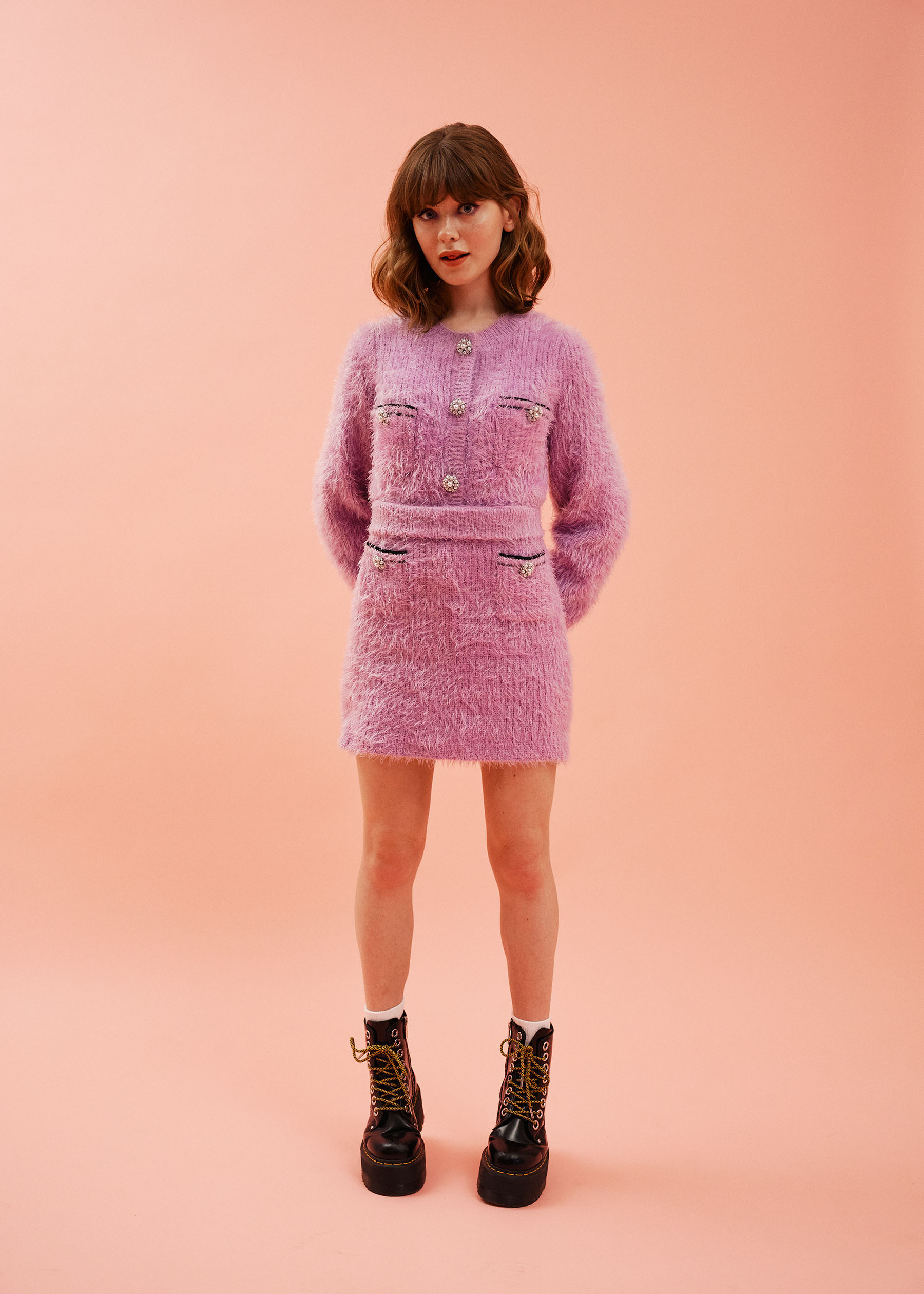 Despite being in the heady business of pop music, Maisie Peters is very clear about the nature of the world as it is. “I think maybe I’m not a romantic person, but I think musically, I like to sing about things that matter…. I feel like that’s why the romanticism comes in, because everything gets heightened for songs. But no, as a person I’d say I’m really, really more of a realist.”

The eponymous title track You Signed Up For This is one of the strongest on the album and bears the hallmarks of her idol Swift with the rolling narrative, and cautiously upbeat tale of teenage dreams tinged with vulnerability, regret and hope for the future (“I know I’ll get better, I’m just not better yet.”).

The oldest song in the record, John Hughes Movie, written when she was 17 proved to be the radio hit that broke through back in February this year. Named after the American filmmaker responsible for teenage coming of age classics such as Ferris Bueller’s Day Off, The Breakfast Club, and Pretty in Pink, it’s typical of her smart and sassy writing. 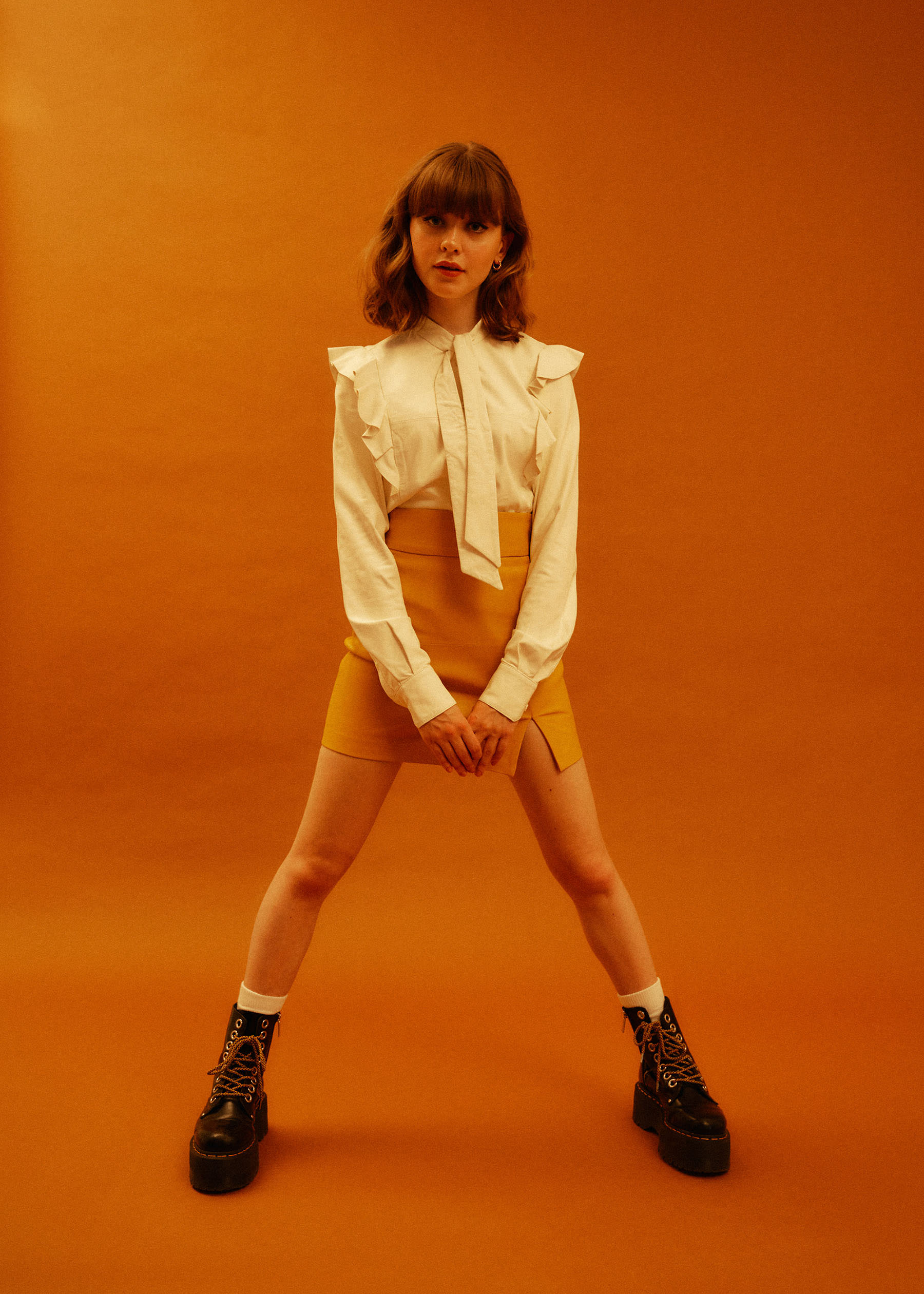 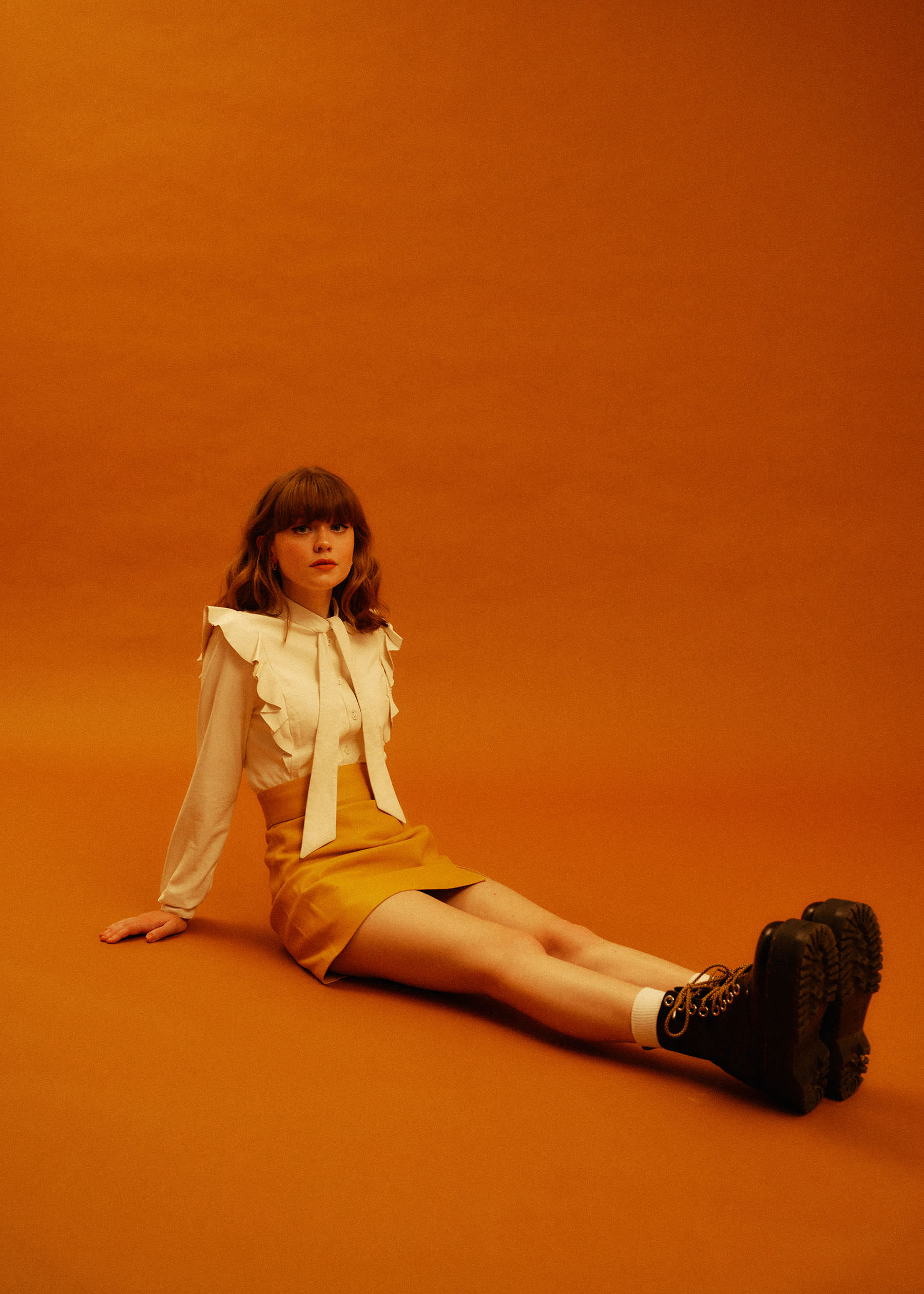 The themes of the record cover the spectrum of young love, from the first rush of excitement such as in Outdoor Pool, (subjectively too melodramatic and saccharine for this writer’s tastes). Interestingly it is also one of the only fictional stories. “I didn’t ever kiss my crush in an outdoor pool, aged 15,” admits Maisie, “but some of it is true. Me, Joe [Rubel, Maisie’s regular producer] and John Green were talking about Skins and UK youth culture – the French exchange, school lockers, being seen in a supermarket with your mum by someone you fancy and being embarrassed.”

Later in the tracklist, Brooklyn is a definitive highlight, a touching real-life tale about Maisie and her twin sister escaping to New York for some fun after a breakup. It speaks of sisterhood and solidarity, “If you want to take her out / you’re gonna have to ask me first /  Come on, have you seen those eyes? / It’s nothing but the best for her.” It feels authentic and relatable.

“Every song has parts of my life in it, some 100%, others a mix of my own experience and inspiration drawn from elsewhere,” says Peters. “Brooklyn is 100% what went down. My sister Ellen’s fake ID was Katy from Michigan. The spoken bit, ‘He’s fit / Go for it’ were Ellen’s words when I met my holiday romance in the club.” 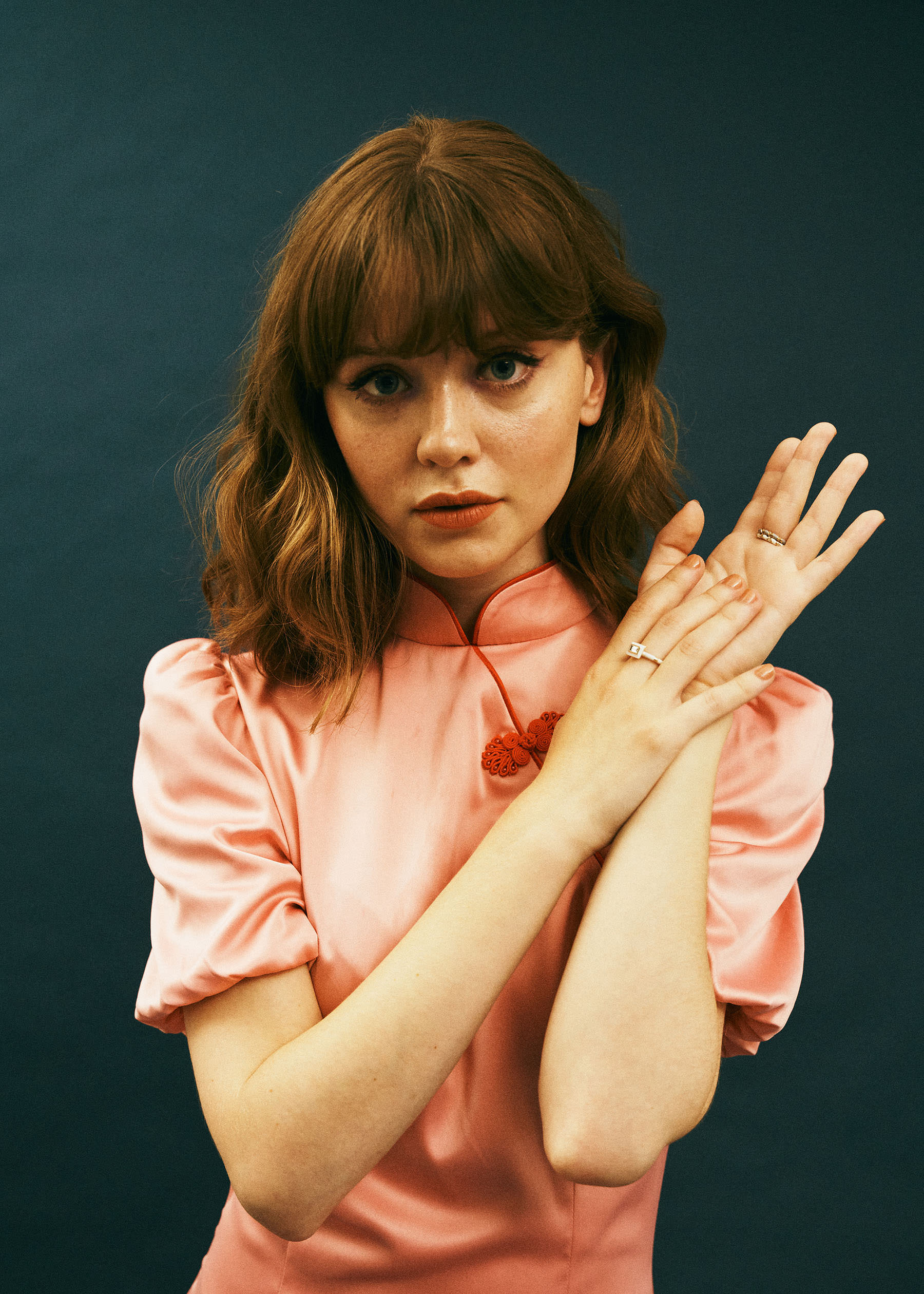 Poignant lyrics are a defining feature of Peters’ writing, and she has some favourites from the album. “I love, ‘you’re the one that got away / and you got away with a lot’. I think that’s actually my favourite, or one of my favourites.” The line appears in Hollow, one of the tracks co written with Sheeran, which works well in the arena of classic breakup songs.

She’s happy to share more of her favourite lines. “I love, ‘so many blank slates I could build a whole fucking house”, which is in I’m Trying, a track that shifts into country pop territory. From the same song she likes:

Not friends, no we’re somewhere in between
‘Cause you’re awful and I missed you and I killed you in my dream
Last night, and even then you didn’t care
It’s a low, and even in my dreams you still don’t want me there
“Which I thought was really fun.” She says. And on the record it does sound fun.

She continues, “I love all the lyrics in Love Him I Don’t, I really like the chorus:
Love him I don’t, love him I won’t.
Love him I did, for a minute, but I’m finished, ‘cause I learnt.”
The track, like many of Swift’s, has confessional, conversational spoken word elements.

The remainder of the album swings between the endearing folk music style of Talking to Strangers, the defiant 90’s R&B mood of Boy, also penned with Sheeran, while Villain channels the spirit of Bruce Springsteen’s I’m on Fire. For the lovers there is Elvis Song, a perfect slice of pop, while Tough Act at the end closes the emotional loop. “I don’t think women appreciate themselves enough. Tough Act is about standing back and seeing what you’ve achieved. For me, it’s being proud that I’ve finally made my debut album. Will it make me a tough act to follow? I hope so.” 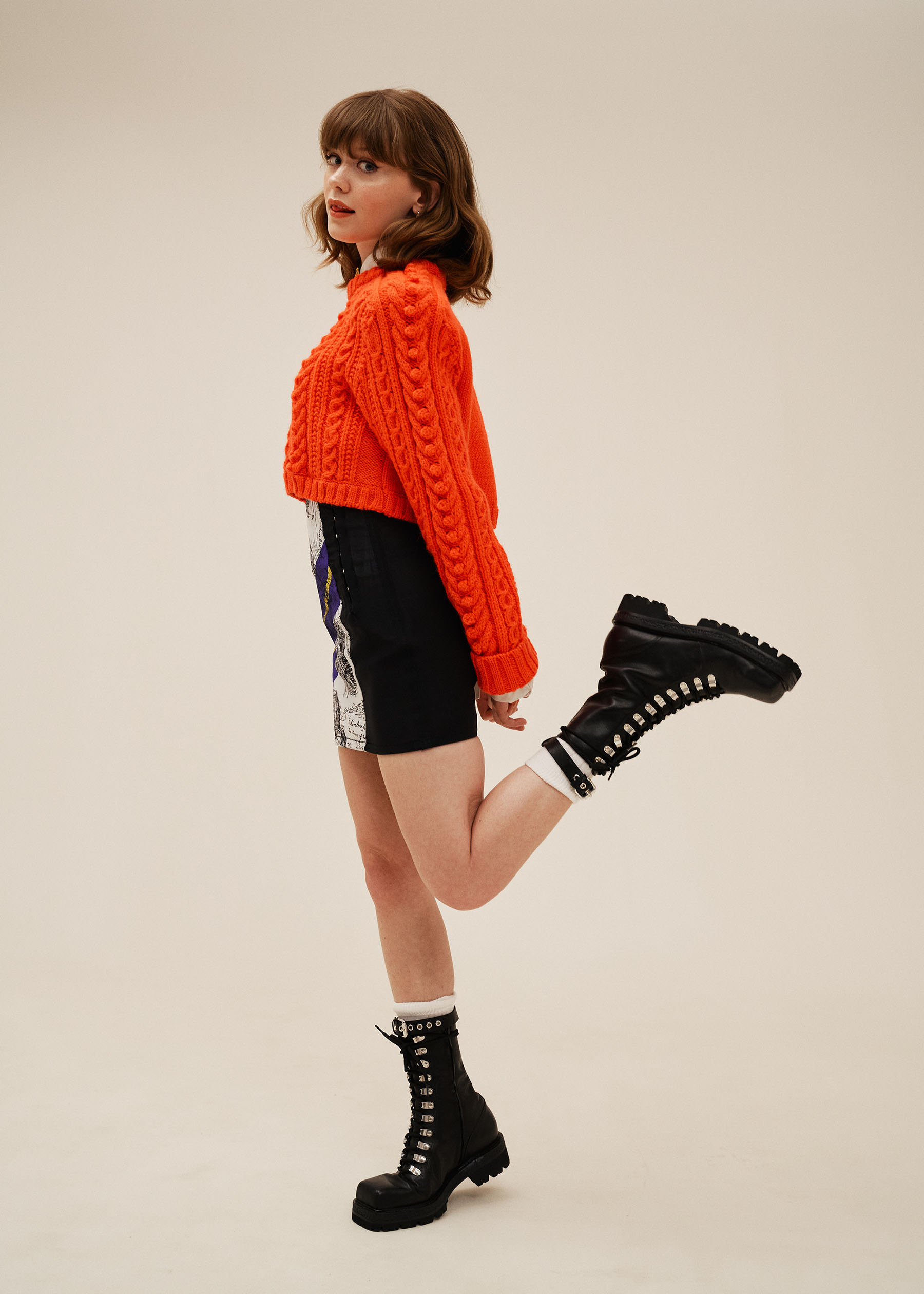 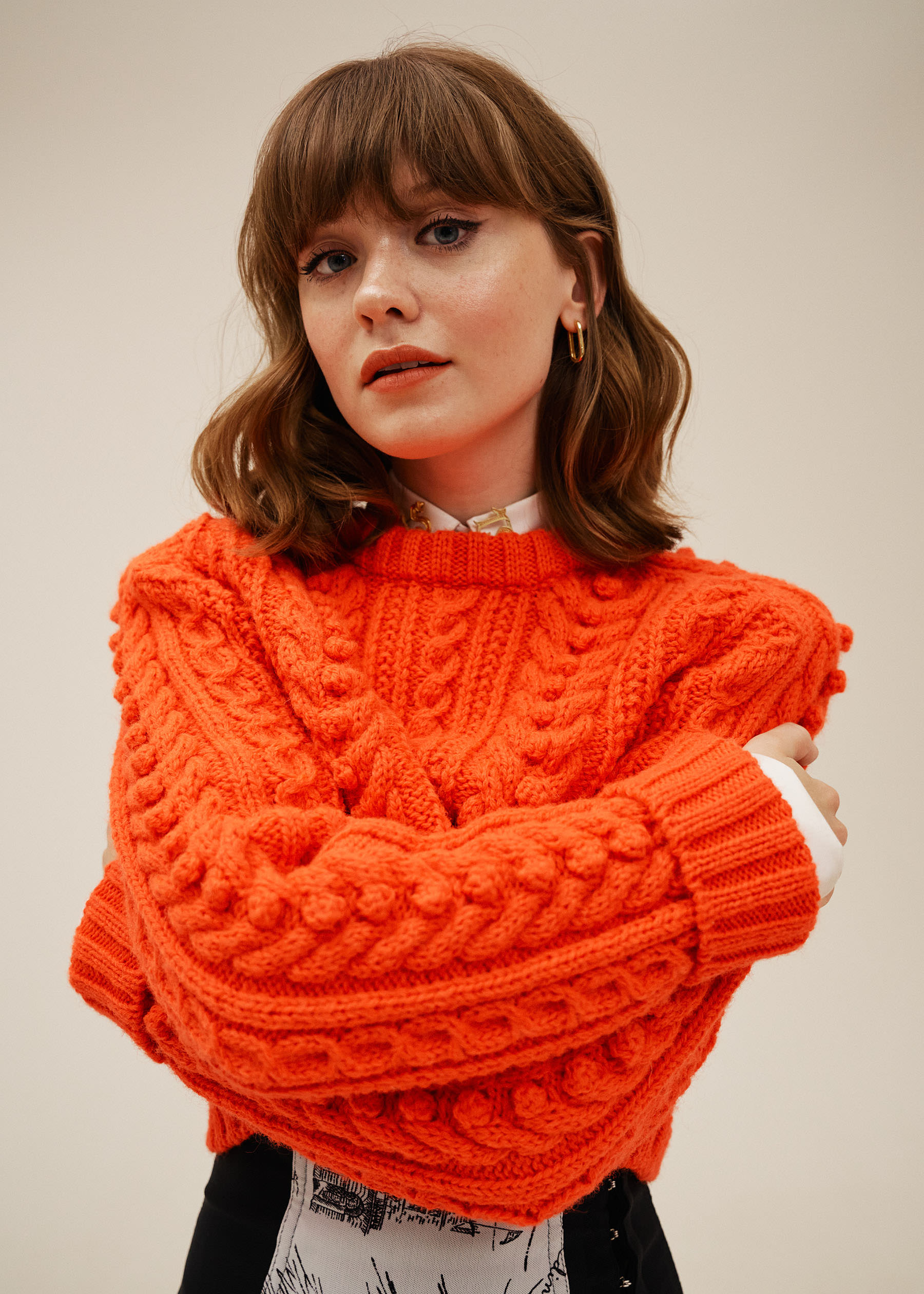 The current single Psycho is Peters “festival banger, an anthem for the parties we all hope to go to. I was at boiling point with lockdowns, desperate to get out there and dance.” It was most recently written, at the end of lockdown with her mentor Ed Sheeran and legendary pop producer Steve Mac. She learnt a lot from Sheeran, “He has the absolute best work ethic of anybody I know, which is impressive for a normal person, let alone someone like, you know, Ed, who has achieved so much and arguably a lot of people in his position wouldn’t feel the need to work so hard. I think he’s really, so grateful for where he is, just so hard working and doesn’t take anything for granted, or anybody. And I think that’s an amazing thing to witness and learn from.”

She has a few of her own lessons to impart. “The first is ‘pick your battles’. I think I do really live by that because there’s a lot that goes in my life, just so many people, and so many decisions to make. I’ve been teaching it to some of my friends recently, and I’m like, ‘remember what we said “guys, pick your battles”, and they’re like ‘Oh my!’ It’s truly blowing their minds!”

Another classic Maisie Peters saying is, “it’s just not that deep”. She explains, “I would say 90% of things are ‘just not that deep’”. She counters this with the argument that “ten percent of things are that deep, so you should probably consider them as such.” She smiles ruefully, “but 90% of things are not. I think that whenever I’m arguing about something, or whenever there’s something that’s hurt me, disappointed me, or made me mad, then I really think… ‘is it really that deep?’ Is it really that deep to care about, or to act a certain way about, or to fall out with that person about, or to make a fuss about? I’m like ‘no, no it’s not’” She’s getting into her stride now, impassioned, “You know, do it! *she claps*, draw a line, move on. And I’m, like, 90% of the time that is the correct thing to do, because you will forget about whatever it was in a week’s time. And so will the world.” 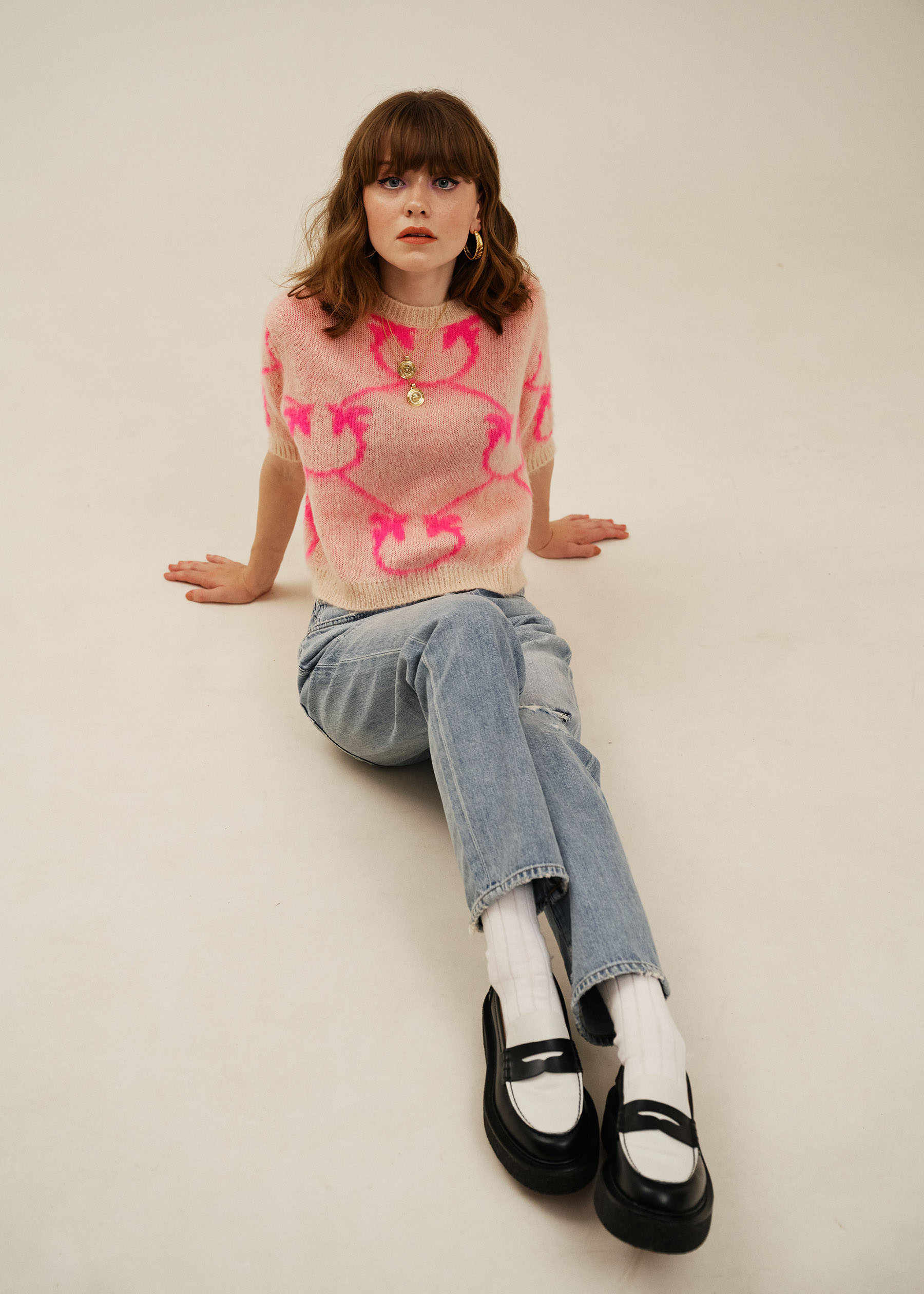 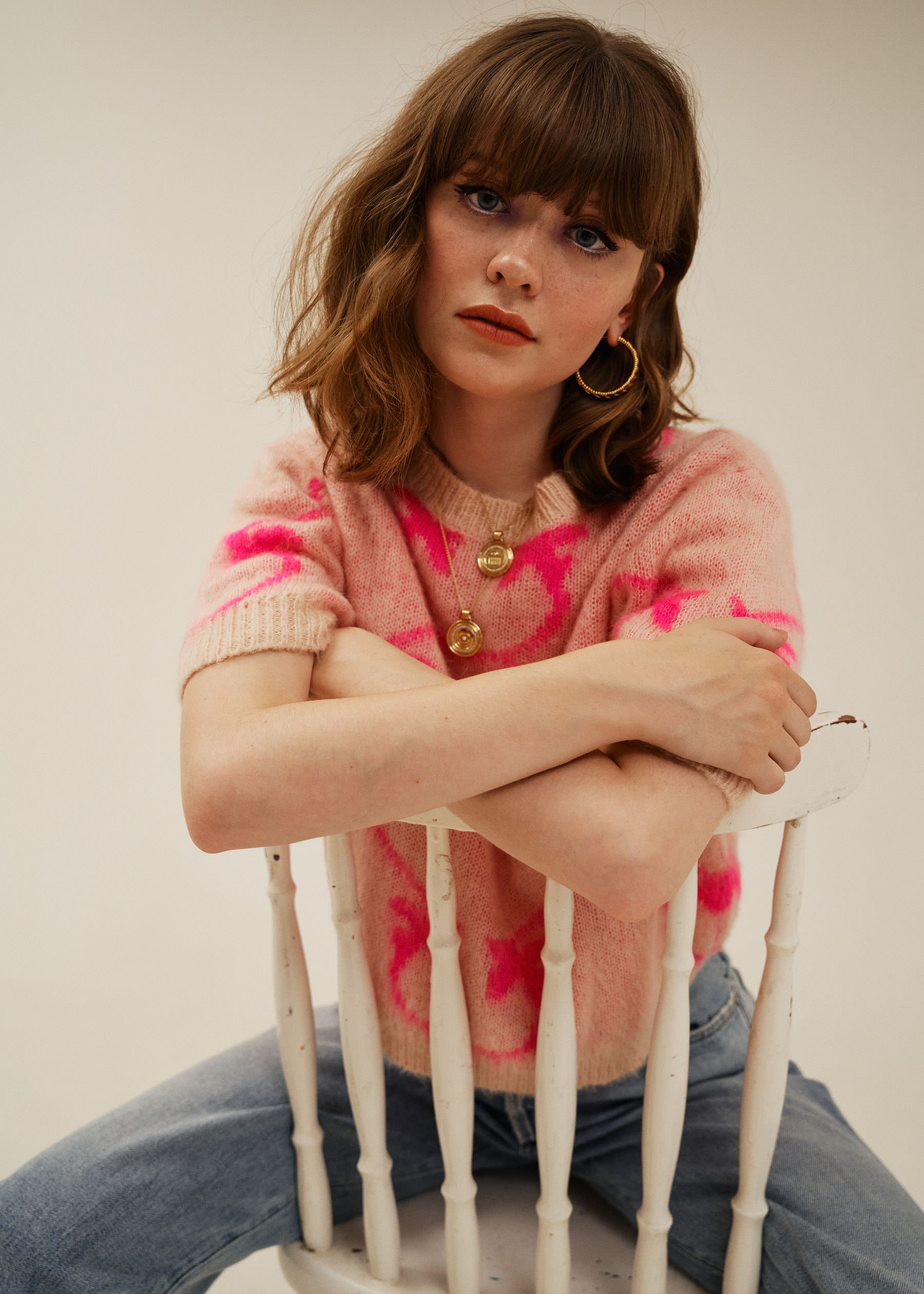 For an artist, her temperament is unusually hardheaded and businesslike, and that ability to roll with the punches stands her in good stead. “I’m fairly good at drawing a line and being okay, ‘that was that, now we’re doing this’. I think that that’s been really useful and it isn’t, for a musician, it’s not super common. A lot more musicians are really sensitive and sort of think a lot more, and harder than me. She says she thinks a lot, of course, but is happy to make decisions objectively, move on, and let go. “I think I’m a fairly pragmatic person. I’m somebody who can sort things out, and get over things pretty quickly.”

She’s got ambition to go with it. “I’d love to just keep playing shows and tours, and play bigger rooms, and be able to sell lots of tickets and play big festivals. And yeah, I think I have big goals because I really believe in and love my music so I want as many people to love it as possible.”

With an aptitude for pop melodies that stick, a street smart lens on the world, and a realist’s outlook for working the industry, Maisie Peters is sure to hit those big goals.