“It’s About The Constant Pull for Freedom”: Nikki Amuka-Bird Translates Ibsen For A Modern Audience

The Lady from the Sea star on treading the boards, trusting her instincts – and a new-found love of water puns

Nikki Amuka-Bird has some words of advice for her 18-year-old self. “Trust your instincts more,” she says. “Back then I think I was looking for people to affirm me – but, as it turns out, some failures can’t be avoided, so you have to just go for it!”

These words go some way towards explaining the gutsiness at the heart of Nikki’s acting CV. Its calibre and scope indicate that this is a woman who thinks selectively and imaginatively about the roles she takes on, from her BAFTA-nominated turn as seemingly perfect Natalie in the BBC adaptation of Zadie Smith’s tragicomic novel, NW, to her role as resilient Marine wife Ruth in Vietnam War aftermath series Quarry – via a performance as crime-busting DCI Erin Gray in ratings-pulling goliath Luther. She’s graced the big screen too, last year starring alongside Rachel Weisz and Timothy Small in Holocaust courtroom drama Denial.

Born in Nigeria, Nikki spent her childhood in England and Antigua – periodically travelling to international fashion shoots with her magazine editor mother – and later attended a British boarding school. She honed her craft at LAMDA before joining the Royal Shakespeare Company, and went on to build up an impressive theatrical portfolio, working at The Royal Court, The National Theatre and Bristol Old Vic, among others.

This month, the 41-year-old actress is back treading the boards in Elinor Cook’s new version of Ibsen’s The Lady from the Sea at Donmar Warehouse. She plays lead role Ellida, the daughter of a lighthouse keeper, whose stable but unfulfilling marriage is haunted by memories of her first love, a presumed-dead sailor who she believes may some day return to her. It’s the surprisingly contemporary themes underlying the plot that appealed to Nikki. “What Ibsen is exploring is how difficult it is to sustain a healthy relationship,” she says. “The constant pull for freedom, for passion and the unknown is something I think a lot of people will identify with.” 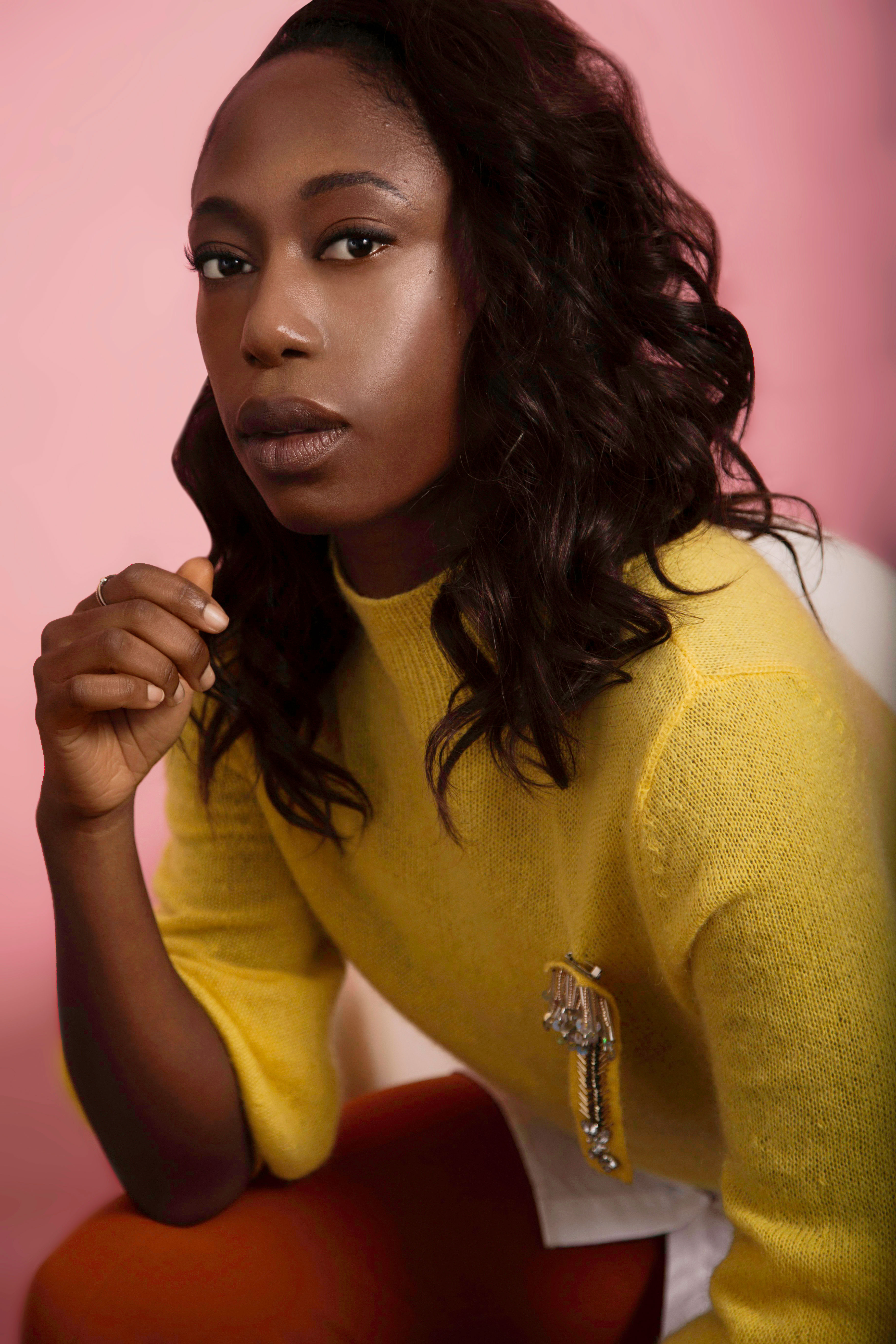 Hi Nikki! You’re in the midst of performing in The Lady from the Sea at the Donmar Warehouse, tell us about your character, Ellida, in your own words.
Ellida is one of Ibsen’s lesser-known but equally complex characters. She’s the daughter of a lighthouse keeper and has grown up by the sea and has an intense, almost obsessive love for the water. When we meet her she’s in a stable but unfulfilling marriage to an older man, Doctor Wangle, and has two precocious teenage stepdaughters. She’s haunted by her first love, a sailor she had a short-lived but passionate affair with, and who may or may not be dead. She feels she is still connected to his spirit and that he is coming back to claim her… and she’s right.

What does Ibsen have to say to an audience in 2017?
I was struck by how contemporary the themes in the play are. Unlike his other plays, this has a ‘happy ending’, in that Ellida stays in her marriage. What Ibsen is exploring is how difficult it is to sustain a healthy relationship – the constant pull for freedom, passion and the unknown is something I think a lot of people will identify with. It is – among many things – a story about enduring love. 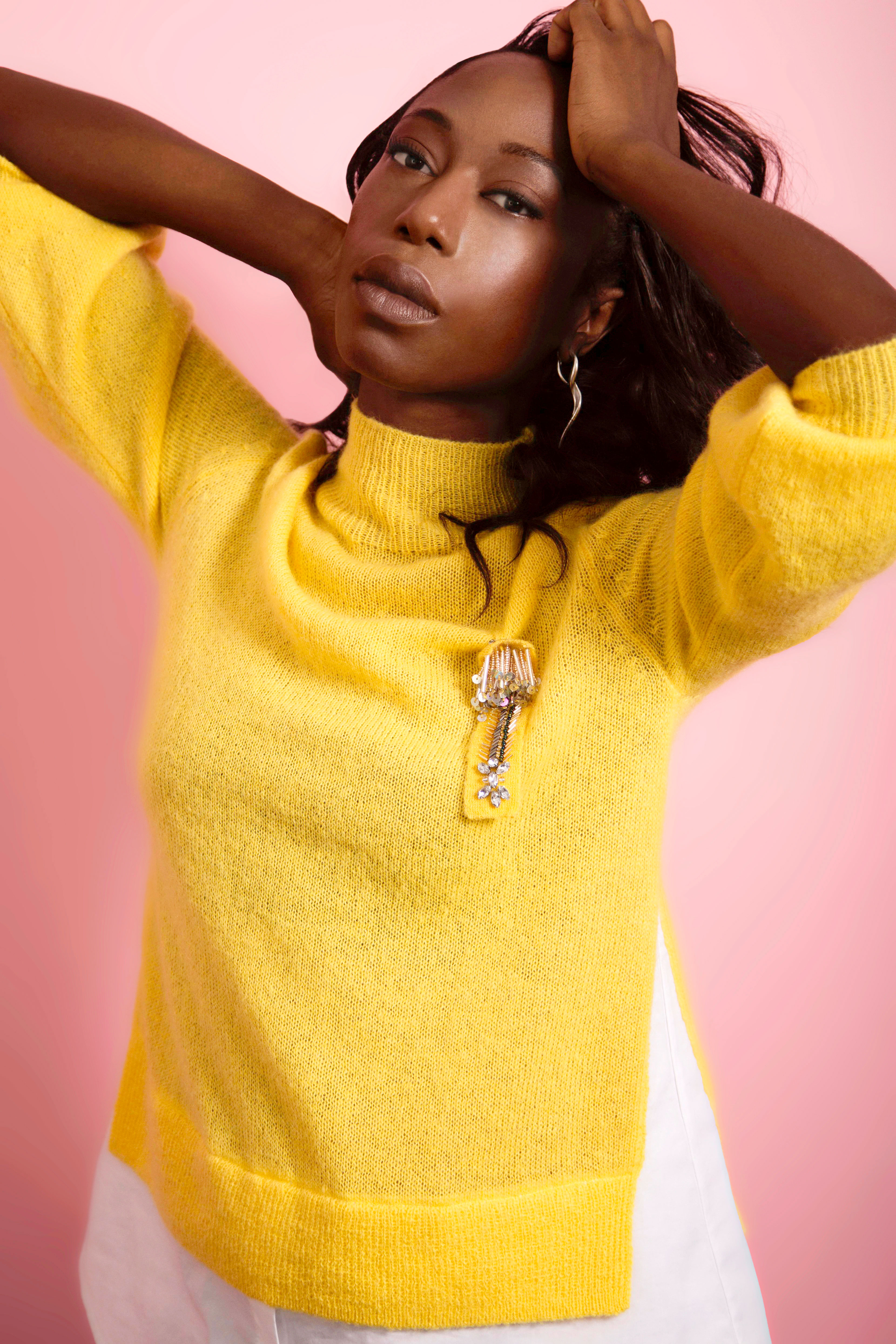 Do you have a method for getting under a character’s skin?
In some ways you’re always jumping into the deep end without a paddle with a new part – and hoping somehow you won’t drown! Excuse the water puns; those have been happening a lot since working on this play. Essentially, it’s investigative work for me. Asking myself continuous questions about the character’s life experience up until the moment we meet them and doing the necessary research, then breaking down the scenes to understand the motivations of the characters and the obstacles they face as they try to achieve them.

You were born in Nigeria but went to boarding school in England. Was that a culture shock?
My mother was an editor of a fashion magazine during the time I spent in Nigeria and she took me on all her international shoots, so by the time I came to London aged five I was used to going on adventures with Mum. I actually haven’t been back there since as we moved to Antigua soon after that, so I feel more British than anything else.

You were a committed dancer when you were younger, but had to quit because of injury. What did you learn from having to abandon your dancing aspirations?
I still have a huge awareness of how people use their bodies, even in day-to-day life. I try to find the tempo and rhythm of each character, their particular tics or physical habits. Dancing also gave me stamina and discipline when it comes to rehearsing. Dancers are able to repeat the same thing over and over until it’s the best it can be, and I have a little of that vigilance still left in me.

With theatre you get a different kind of buzz, you have the privacy in rehearsal to really carefully craft the story and develop the character, and then the adrenaline of being in front of a live audience.

Do you have a preference for TV, theatre or film?
I do love to be on sets and on different locations. There’s a thrill about the cast and crew all mucking in together in the middle of nowhere for a night shoot. With theatre you get a different kind of buzz, you have the privacy in rehearsal to really carefully craft the story and develop the character, and then the adrenaline of being in front of a live audience. To be honest, I love all of it. I’m still pinching myself that I get to do this job that I love so much.

What are your pre-performance rituals?
Apart from warming up my voice and making sure I feel limber, I like to just spend a bit of time with the cast, reconnecting with each other before we take the leap again.

What are the three best books you’ve read this year?
Grief Works by Julia Samuel, Autumn by Karl Ove Knausgard, and Ibsen by Michael Meyer. 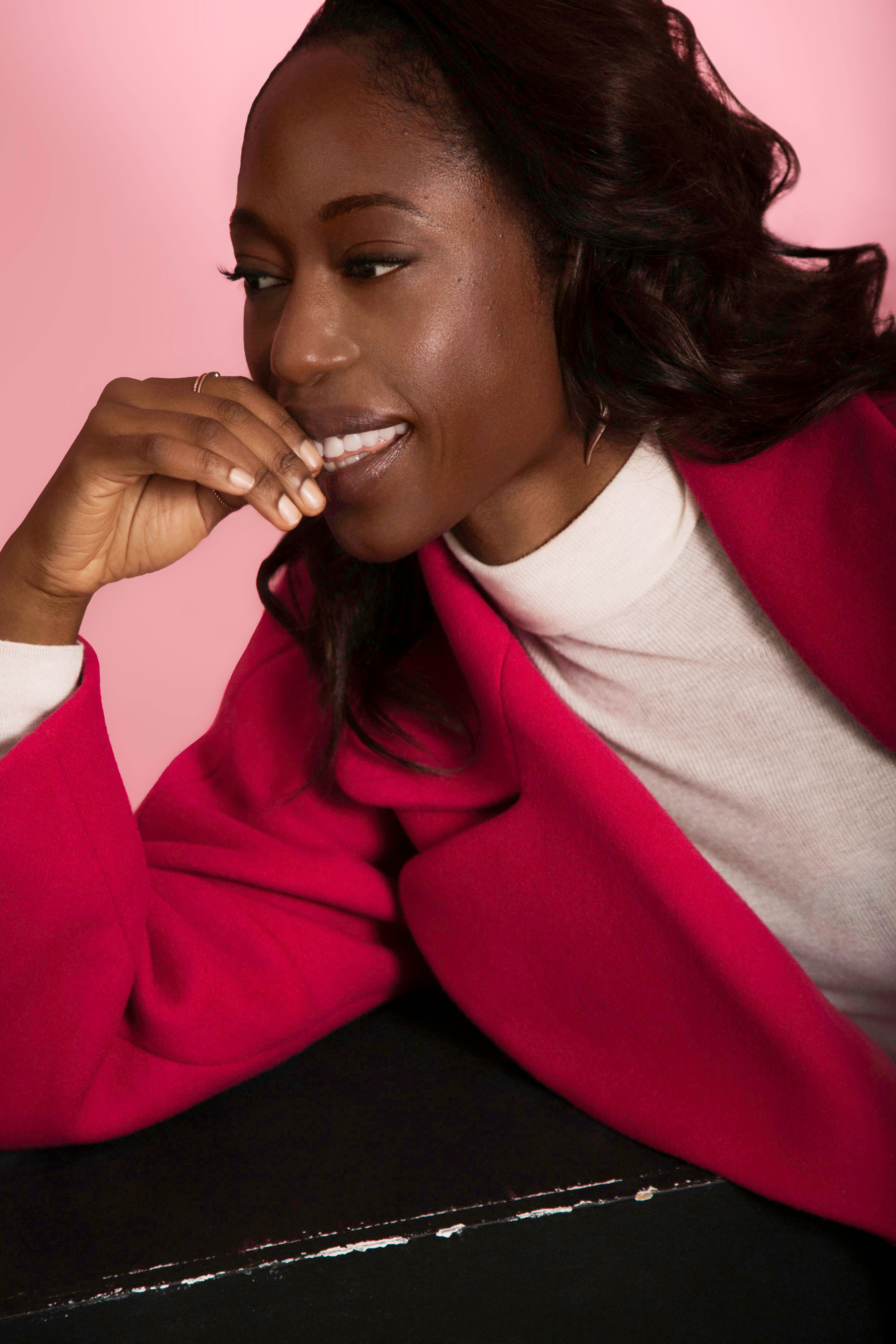 I still have a huge awareness of how people use their bodies, even in day-to-day life. I try to find the tempo and rhythm of each character, their particular tics or physical habits.

It’s been a crazy year in politics for the UK and abroad. Would you describe yourself as politically active?
I question myself about this all the time. Could I be doing more? I think the answer is probably yes. Present times seem to call for less passivity.

What do you wish you’d known when you were 18?
How to trust my instincts more. I think I was looking for people to affirm me. I was at drama college discovering lots of things and having a great time but also massively scared of failure. As it turns out, some failures can’t be avoided, so you have to just go for it!

What would you like to be better at?
Baking. I’d so love to be that person who says I just whipped up this delicious batch of cookies or chocolate cake for everyone. Never gonna happen.

What are some of your favourite haunts in London?
I’m a west London girl so I love Portobello market and mooching around that area, exploring the antique market, bars and cafes. The Gate Cinema, The Electric, The Rum Kitchen. I love that there’s still a West Indian influence there. It never gets old to me. 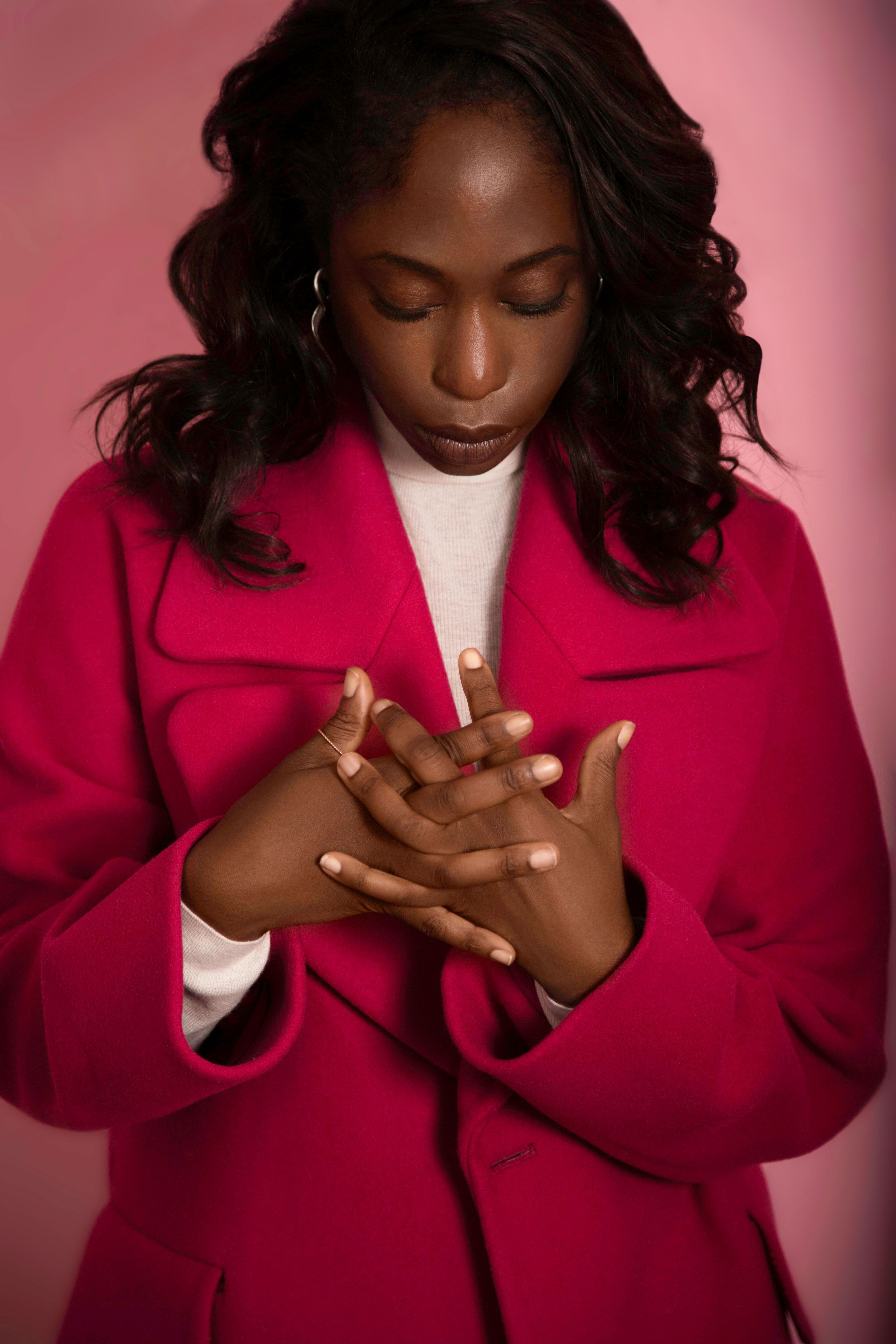 Describe your perfect Sunday…
Lazy morning, breakfast and coffee with the Sunday papers, walk in the park, a movie, Sunday roast and watching the Strictly results. Nothing better than a cosy cuddly Sunday.

You’ve got a new BBC drama coming up, Hard Sun. Why should we watch it?
It’s another adventure from the wild and wonderful mind of Neil Cross, who created Luther. This time Neil has created one of the most striking female protagonists I’ve seen since The Girl with the Dragon Tattoo, played by Agyness Deyn. She and Jim Sturgess are our flawed but fantastic heroes and I play one of the scariest women I’ve ever come across in a script. It’s a proper thrill ride.

Nikki can currently be seen on stage in The Lady from the Sea at the Donmar Warehouse, which runs until 2nd December. Hard Sun is coming soon to BBC One.