“I’m Drawn to Stories That Elicit an Emotional Response”: Joanne Froggatt on L.A, Downton and Liar

Joanne Froggatt is going places. Literally – after her Phoenix photo-shoot over-runs, the Golden Globe-winning actress has to make a quick escape to her next appointment, but even in her rush she finds time to effusively thank the photographer, the stylist, the magazine staff and everyone around her. She’s been effortlessly charming, bubbly and funny, chatting happily away even as she admits that the glamorous aspects of her job aren’t really in her comfort zone. “I’ve worked out what to do,” she says – and that seems to be to muck in, make people feel comfortable, and have a good chinwag. 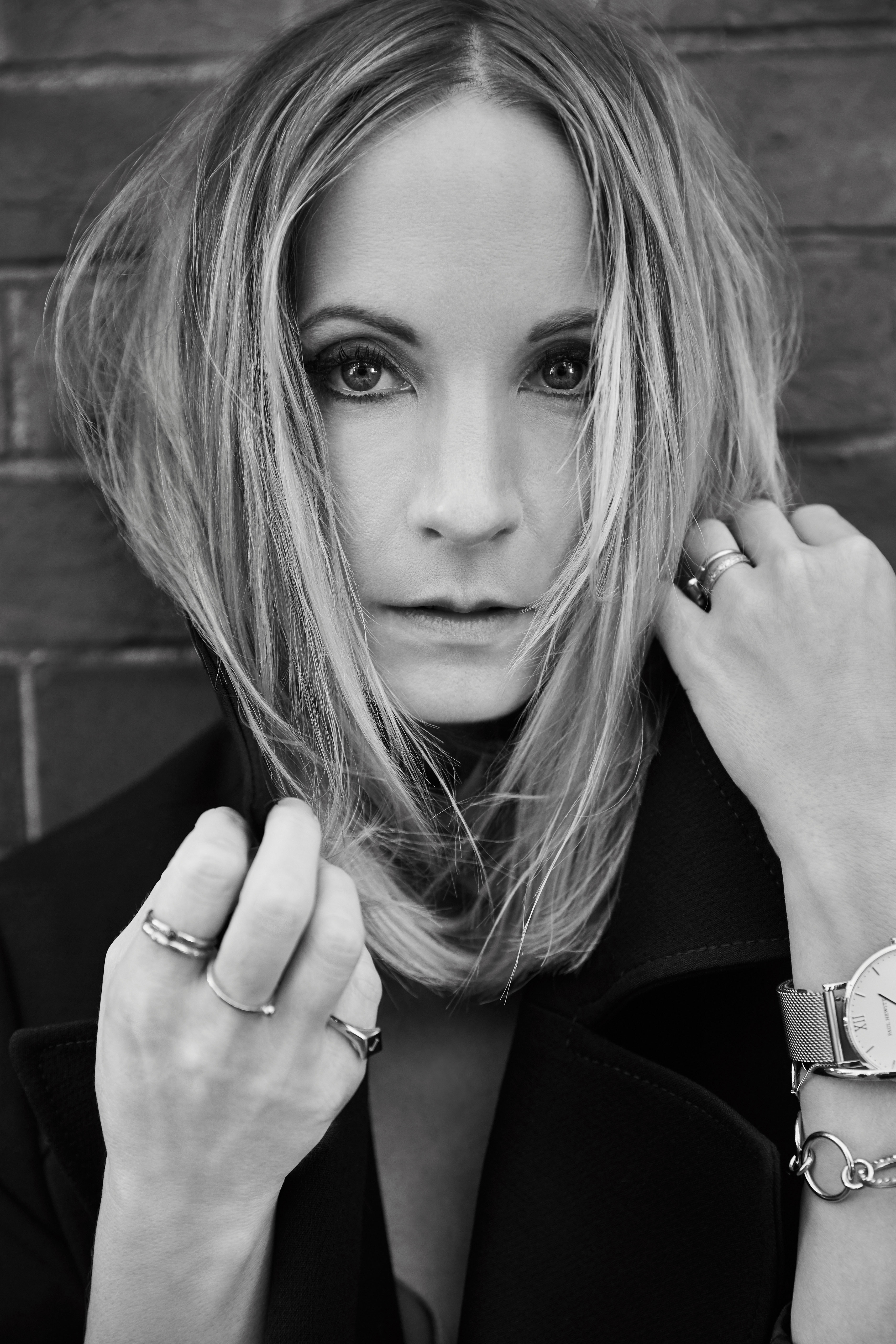 This glamourpussing is a far cry from when she first started out with a recurring role on Coronation Street, playing the ragged runaway waif Zoe Tattersall in the late 90s. Joanne remembers her time on the cobbles with a mixture of fondness and amusement: “(My character) had a baby, sold my baby, stole it back, my baby died, I went mad with grief, tried to commit suicide and ran off with a religious cult – all in 18 months. It was a huge learning curve”. She still loves Manchester, despite being a proud Yorkshire lass, and keeps a strong friendship with the cast members she first acted, and bunked, with. “I hope to get the chance to pop up one weekend and see them” she says hopefully, with the quiet resolution of someone who loves keeping in touch with old friends, no matter how busy she is.

Coronation Street was her springboard into serious television, and she plunged into some very dark roles – playing the lead role of Danielle Cable in 2003’s Eyewitness about a true-life road-rage murder, and Myra Hindley’s sister in 2006 miniseries See No Evil. She’s particularly proud of 2004’s Island of War, a series about Jersey under Nazi occupation, and laments its one-season run, although she is pragmatic about its short lifespan: “Something can be great and people don’t take to it, something can be not what you see as the best thing you’ve ever done and people love it, and if you’re lucky something can get the “double whammy” where you love it and people love it too”. 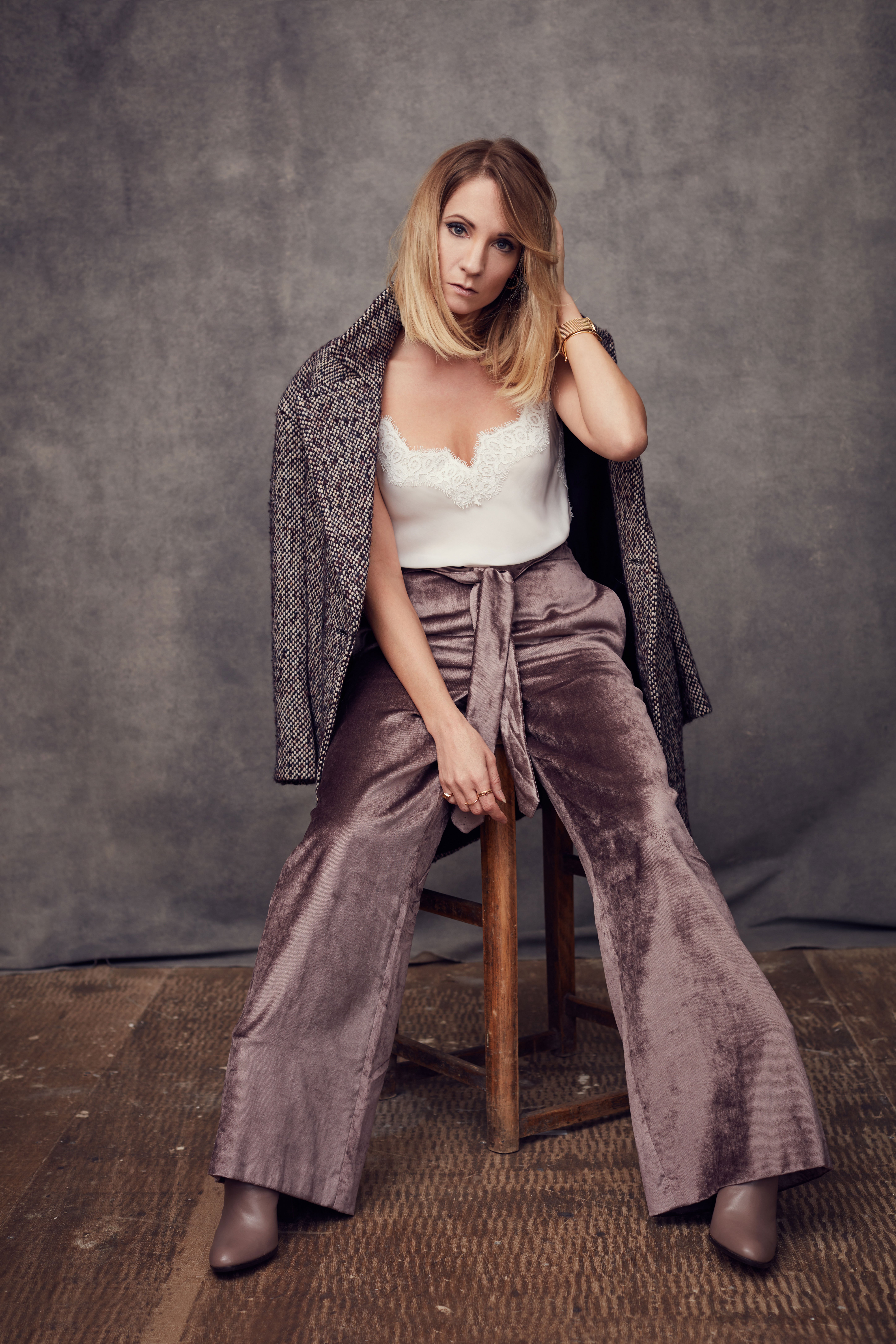 The world was certainly double-whammied with Downton Abbey, the international behemoth that won Joanne international recognition and acclaim in her role as Anna Bates, the maid whose travails – including sexual assault and time in jail for murder (not guilty, m’lud!) – made a splash on both sides of the Atlantic. She remembers being “blown away” by the grandeur of the Highclere Castle set, has nothing but good things to say about her “brilliant” co-stars who she still sees regularly, and particularly appreciated her comparatively dowdy role. “Oh my goodness”, she exclaims, “how glad was I that I only had to do one costume fitting at the start of the series and that was me done – the poor upstairs girls had to do a long day filming then an hour of costume fitting. My costume was very robust and I could have a little sleep at lunchtime without messing my hair up – I had it down to a fine art. Some of the upstairs costumes were made from real vintage lace – in the first season I wished I was wearing them but by season six I was thinking this is great, I don’t have to worry about that…”.

Whether it’s to make me laugh, or cry, or appreciate my life, or fall in love, or to get cross on someone’s behalf – the emotion that you feel when watching is the exciting side of any project

Alongside her impressive television pedigree, Froggatt has made a strong impression with a selection of carefully-picked, high-impact movie roles. As a young soldier recently returned, and traumatised, by her time in Iraq in 2010’s In Our Name, she was named most promising newcomer at the British Independent Film Awards. And roles in emotionally-raw British films like the excellent Still Life alongside Eddie Marsan and Filth, with a scenery-masticating turn from James McAvoy, established her as an impressive talent whose slight frame and elfin beauty belies a steely intensity and shattering emotional range. “I’m very drawn to stories that elicit an emotional response” she explains, “and I presume people watching will have that response as well. Whether it’s to make me laugh, or cry, or appreciate my life, or fall in love, or to get cross on someone’s behalf – the emotion that you feel when watching is the exciting side of any project.” 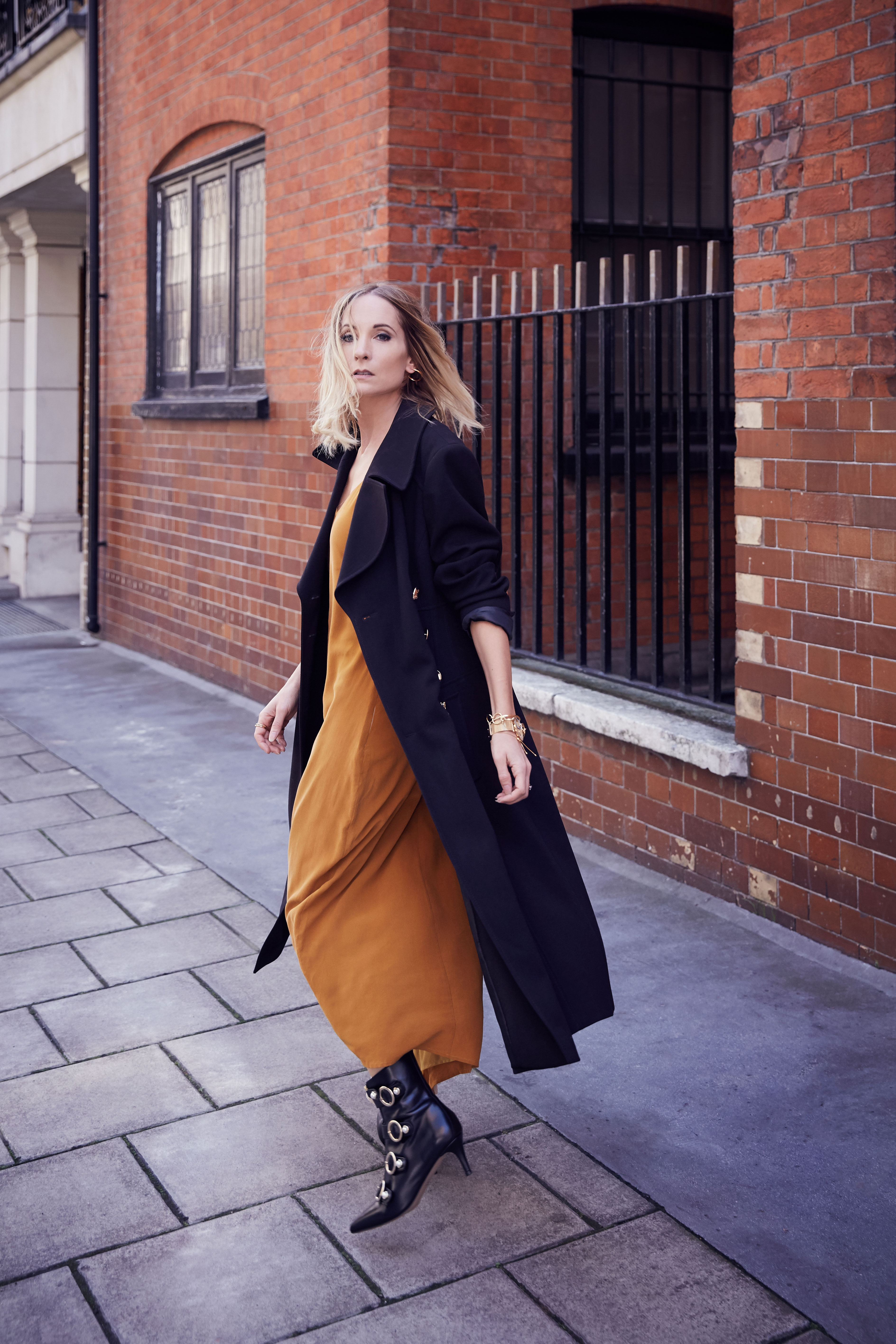 And it’s that intense emotional reaction that she’s hoping to rip out of viewers in her new six-part TV mini-series Liar, showing on ITV on Monday evenings and available on ITV Player now. Starring alongside Hornblower’s rakishly handsome Ioan Gruffudd, the show hinges on a first date which the two protagonists have radically, and disturbingly, different recollections of. While Gruffudd’s widowed surgeon wakes up celebrating an enjoyable evening, Froggatt’s school teacher is marching to the cop shop to accuse him of rape. Froggatt excitedly describes the show as “an out-and-out, twisty-turny psychological thriller” and is alive to its power and ripped-from-the-tabloids relevance. 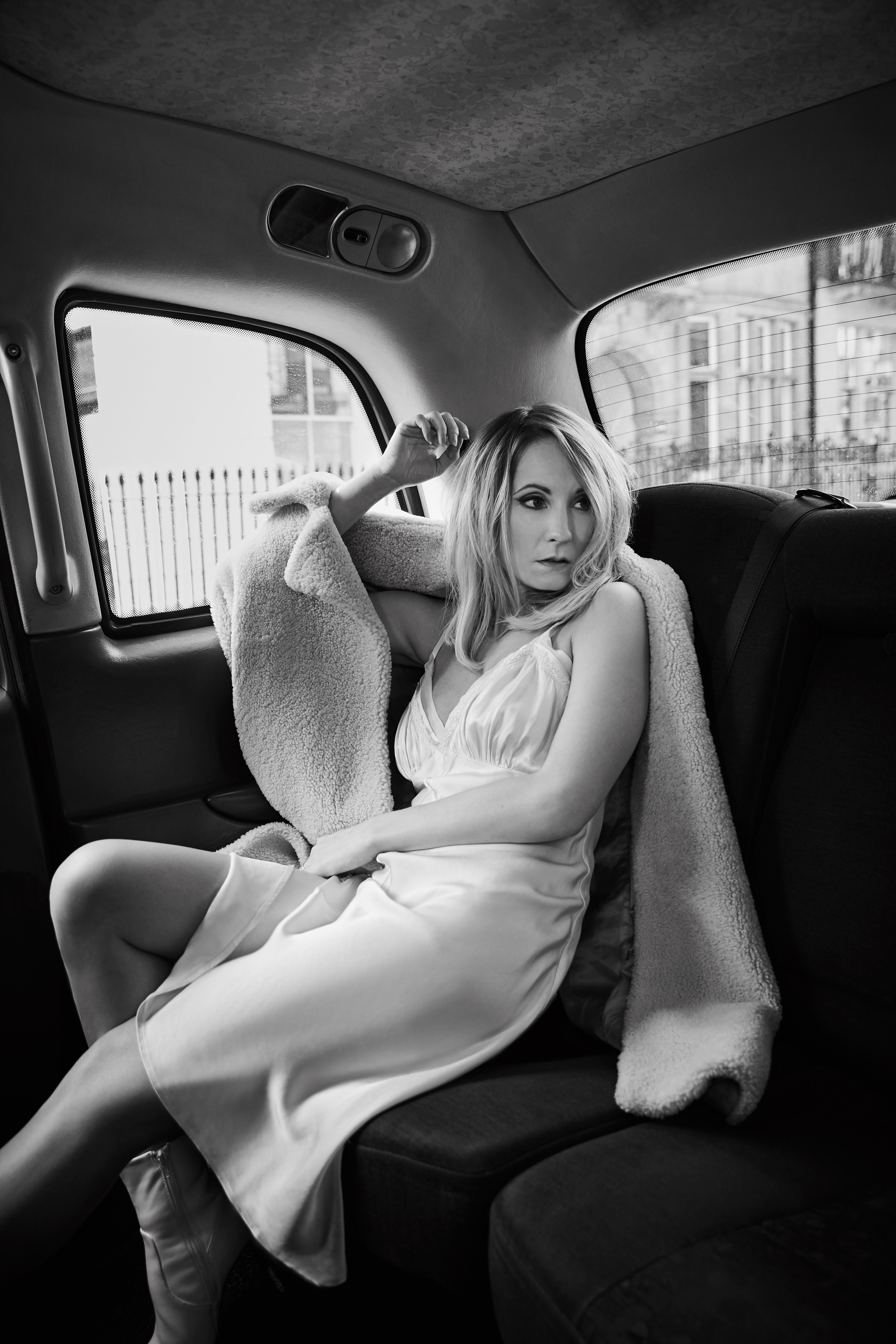 “The show asks questions about where we are socially”, she explains. “About how much we judge other people on their behaviour and what they say.” Like she was in the make-up chair, Joanne is keen to get people talking: “Anything that opens discussion about a sensitive subject matter is a good thing. This is definitely a show that people will talk about after each episode, and educating society and our young people about what consent means, how to have respect for yourself, and other people can only be positive.” That said, she’s adamant that, first-and-foremost, Liar is good, old-fashioned television entertainment and that people should prepare for a roller-coaster ride.

Liar will also be shown in the States, and Joanne is excited about doing more work over there and building on her already-impressive résumé. Her time in Los Angeles, where she has spent an enjoyable few months over the past years – has been fruitful indeed. While she says she’s already achieved her American dream – “winning the Golden Globe (Best Supporting Actress in 2015 for Downton Abbey) felt like a dream come true”, it feels like the dream may only just have begun. She has some intriguing movies in the pipeline, including A Crooked Somebody in which she stars alongside Ed Harris and Amy Madigan in a humorous thriller about a conman psychic who gets embroiled in a crime and tries to use it to further his career. “It all goes terribly wrong for him”, Joanne warns, lavishing praise on this “exciting, different film” and her “lovely and generous co-stars”. The film will be released next year. 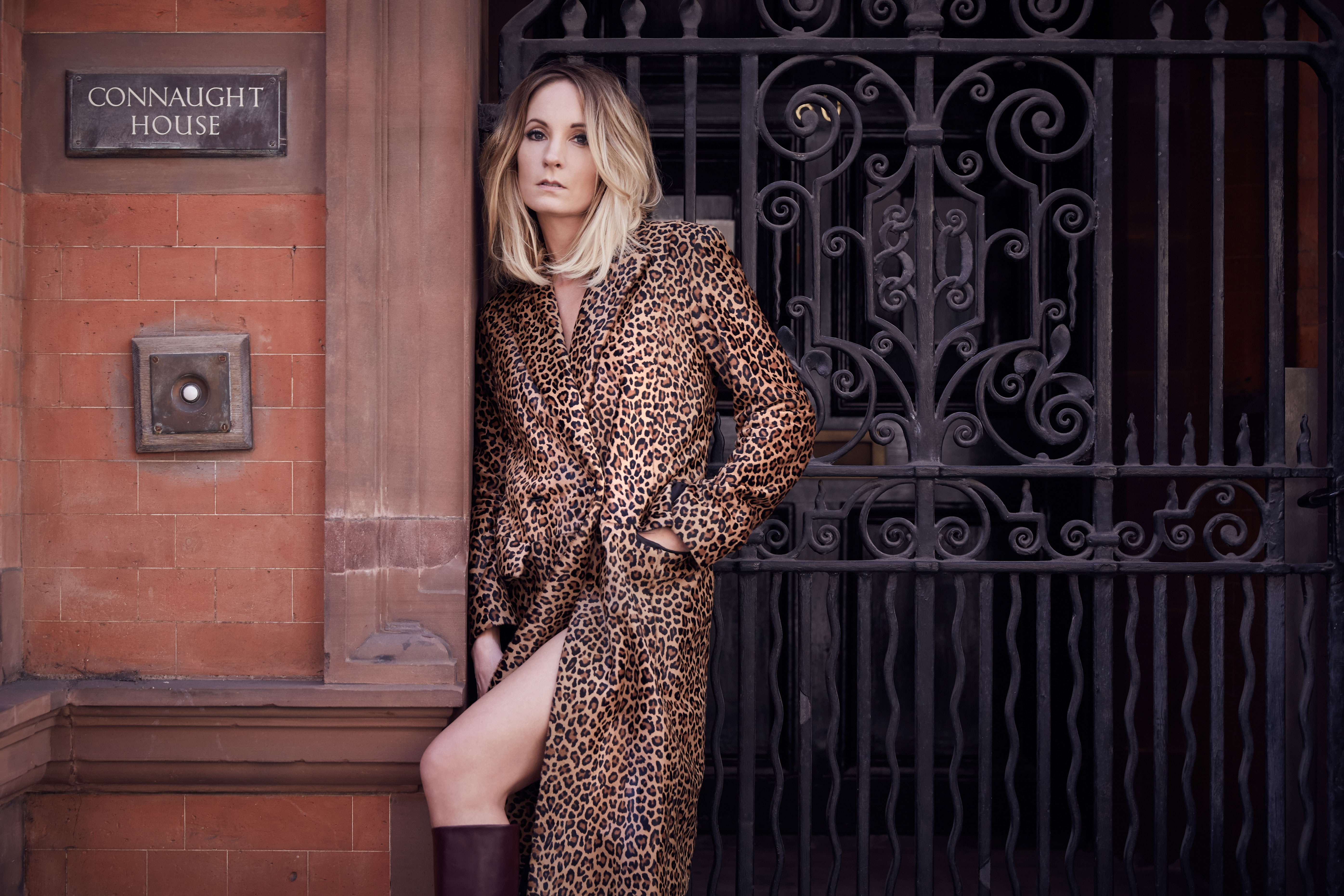 Also coming soon is Mary Shelley from inspirational female Saudi Arabian director Haaifa Al-Mansour. The film details the beginnings of the infamous love affair between Percy Shelley (Douglas Booth) and the young Mary Wollstonecraft Godwin (Elle Fanning), and Joanne – shockingly – plays Mary’s nasty stepmother, Mary Jane Clairmont. She’s anxious to clarify that, though she’s playing the mother of British up-and-coming star Beth Plowley, there’s really only 10 years between them. She expresses mock-outrage at already being cast as a “wicked stepmother”, and genuine excitement at the opportunity to play what again is a very different role for her.

Joanne is enjoying being back in the UK for the moment – she’s just set up a new production company, has new projects in progress, and is busy promoting Liar. Not too busy to binge-watch some of her favourite TV shows though, and she rattles off an impressive list of recent favourites – Feud, Westworld, House of Cards, The Affair, The Handmaid’s Tale – all notable for their strong female leads. “It’s nice to watch things and pretend you’re working” she laughs. “I don’t need to feel guilty”. When she’s in London she feels a Downton-esque draw to opulence, gravitating towards old historical buildings like The Savoy where she can lose herself in olde-worlde grandeur, though as an “upstairs girl” now, she’s mostly just there for press junkets and meetings.

When asked for a secret bit of Joanne Froggatt trivia, she sheepishly confides: “I can’t ride a bike. I sort of did it for a job once, I had to learn when I was 23 and I was given an original 1945 bike and it was all stiff”. It didn’t end well. Despite her lack of balance on two wheels though, with her new TV and film projects, a new production company, and a hefty dose of optimism and charm, Joanne Froggatt is indeed going places. And it’s going to be a great deal of fun to watch. 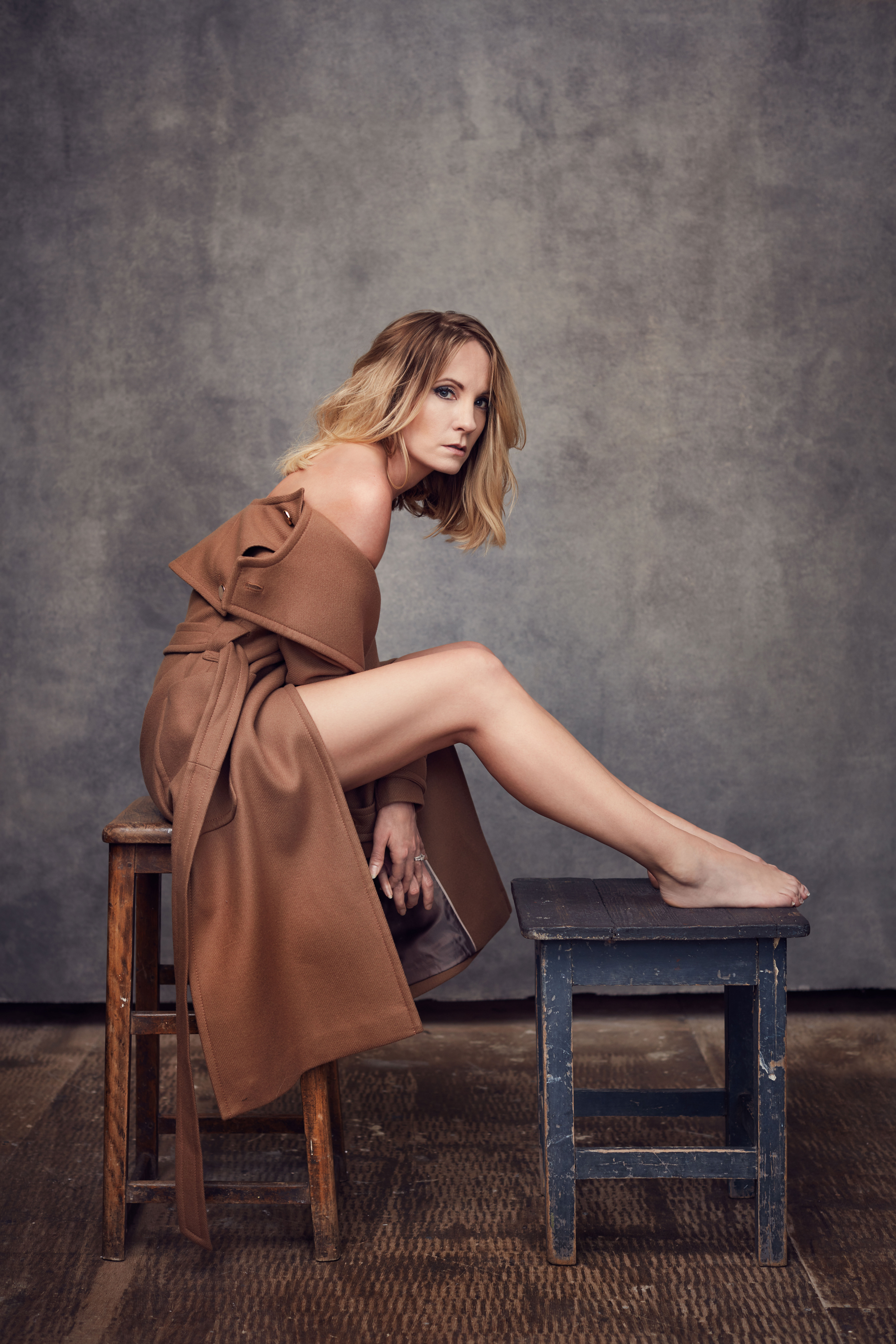 Liar continues on ITV, Mondays at 9pm and you can catch up on episodes via the ITV Player.