How to Be a Superstar DJ, and Not Let the Lifestyle Steal Your Soul

It’s a blistering hot Thursday night on the White Isle, Jean Claude Ades is poised like a professor over his decks in Lio, an intimate, opulent club situated in Marina Botafoch. The owners of the gleaming yachts have congregated here for one the jet-set’s most talked about parties, Be Crazy! Bar staff look like supermodels, sparklers hiss in ice buckets as they’re carried by waiters to heaving tables. The DJ booth is at capacity. On the dance floor the crowd sway harder as the tempo builds. An hour into the set and it’s taken on a harder edge. The super-wealthy dancing on tables to pots-and-pans techno in Hervé Léger and vertiginous heels is a surreal sight.

“I collect people from everywhere in the world, it’s a melting pot, that’s what I love about it,” explains Ades in his mellifluous accent, part clipped European, part transatlantic drawl. “Of course it is more glamorous because the ambiance puts you in the mood to dress up more than when you go to DC10, but you see the same faces with different dresses. In one you have flowers in your hair, the other you’re wearing heels by Louboutin. Same girl.” 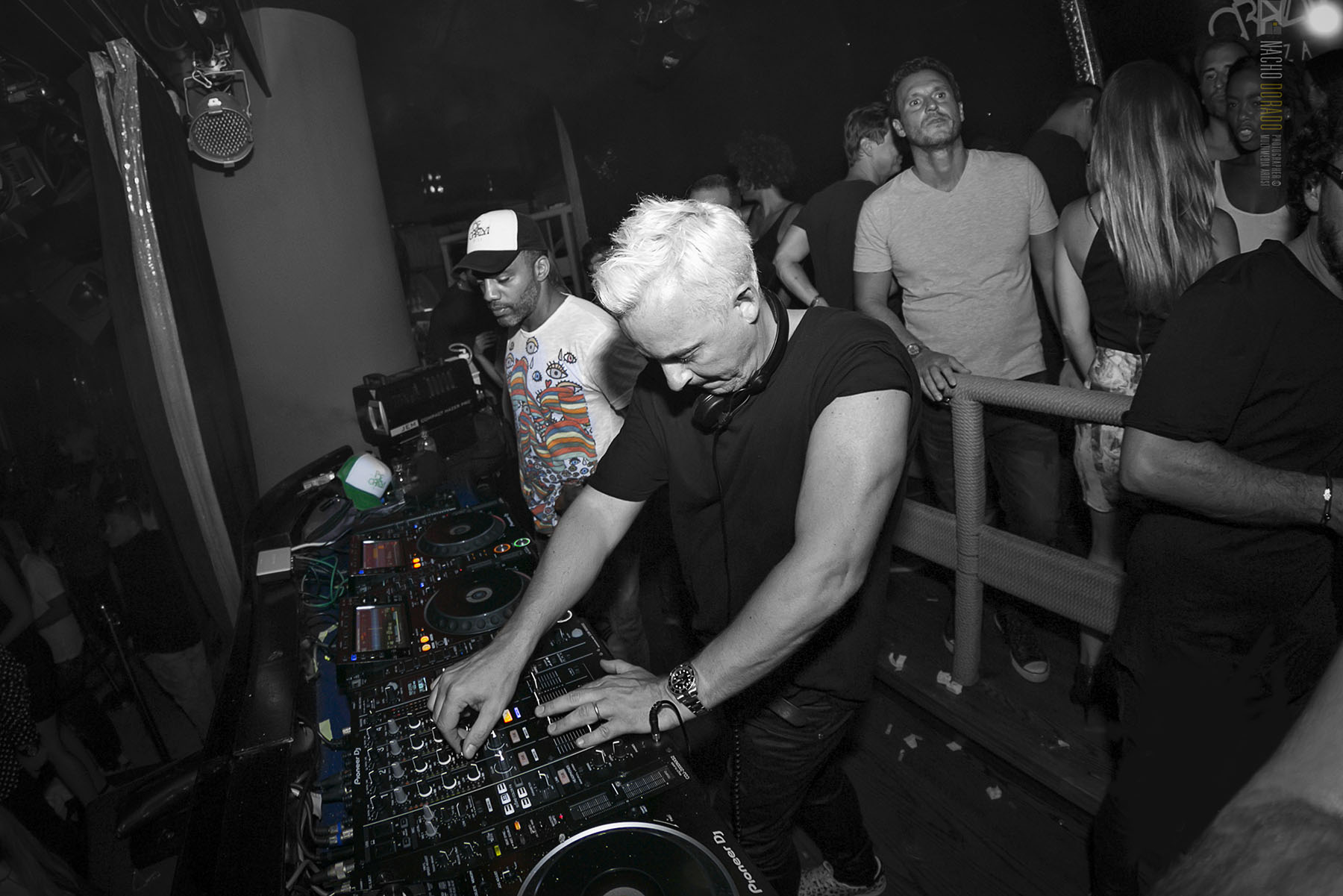 We met Ades, 45, a few hours earlier in an elegant Italian restaurant adjacent to the club in the Marina, it was his choice, one of his favourites. The French-German, Italy-raised producer arrives late but is profusely apologetic and charming, his sleepy hazel eyes suit the simple black T-shirt he’s wearing. He orders black truffle but is disappointed when it’s dry, with a Gallic shrug admits it’s out of season, smiles and drinks a good red wine.

“I started as more of a producer than a DJ in the beginning,” Ades explains. He had a musical upbringing: “my father was a musician, he listened to lots of jazz music, lots of classical. He had a huge collection, and my mother was listening to the Rolling Stones and Cat Stevens. As a teenager he listened to disco and was captivated by the electronic sound, namechecking Eurythmics, New Order and Depeche Mode. He played piano, and was invited by a friend down to a studio when he was 17 to record. “It was the first time I had seen a studio in my life and I was so impressed. The passion, the love started at that moment! I saved all the money so I could buy a computer, which at that time was an Atari. 4.21 Sampler, the new thing on the market for the European dance and hip hop scene.”

In 1994, the same year Ace of Base saw “The Sign”, ace of bass Ades signed to publisher Warner Chappell. “They shopped around several records of mine and were offered deals by record labels, from then on we produced music and writing for other people.” His first release on Virgin Records, The Colour Of My Style, went to number one in the dance chart. “After having several successful records I also got requested to play, so that’s how I got into DJing as well.” Simultaneously he was pioneering the new house and techno sound, bringing DJs from Amsterdam’s legendary iT Club to Southern Germany. “I was organising parties already at a very young age. The first ones in South Germany, no-one even knew what house music was.”

“I was organising parties already at a very young age. The first ones in South Germany, no-one even knew what house music was.”

Ades produced pop “because I knew how to do it – well, crossover dance to pop,” he admits. 2003 brought major chart success with Dannii Minogue and his catchy as hell song I Begin To Wonder, and he went on to work with artists such as The Pussycat Dolls, Deadmau5 and The Nightcrawlers, but wasn’t creatively fulfilled. “I got bored working for major record labels because they always want a change here, or change things there, so it’s not very creative, it’s more mechanical work. It’s about delivering, and a formula,” he explains, “that’s why I tried to just do my own thing and create my own music.” For him, freedom is the biggest luxury, “I don’t need big cars or boats or whatever. I like to dress well, but that’s affordable. For me the most important thing is to have less weight and be a free person and be doing something for your own, and not have a boss everyday who tells you what to do. I’m very free in my decisions.”

“I do what I love and I’m not forcing it, not pushing it. It’s grown organically. I can say I didn’t sell myself, and I can play my music. Produce whatever I want, I don’t need to do things just for the money,” he continues, gesticulating with a cigarette. “Of course we all have to make a living,” he laughs, “but I’m enjoying maximum [sic] what I’m doing! I’m not thinking, ‘Oh God, I have to go and play tonight.’ I’m very excited every Thursday when I go to play, and when I fly to other destinations to go to gigs.”

“It’s magic, wintertime when everybody leaves the island. It’s so peaceful, you feel like there’s a particular energy on the island – it makes me feel calm in my heart and I can go back to the studio and have a creative session.” 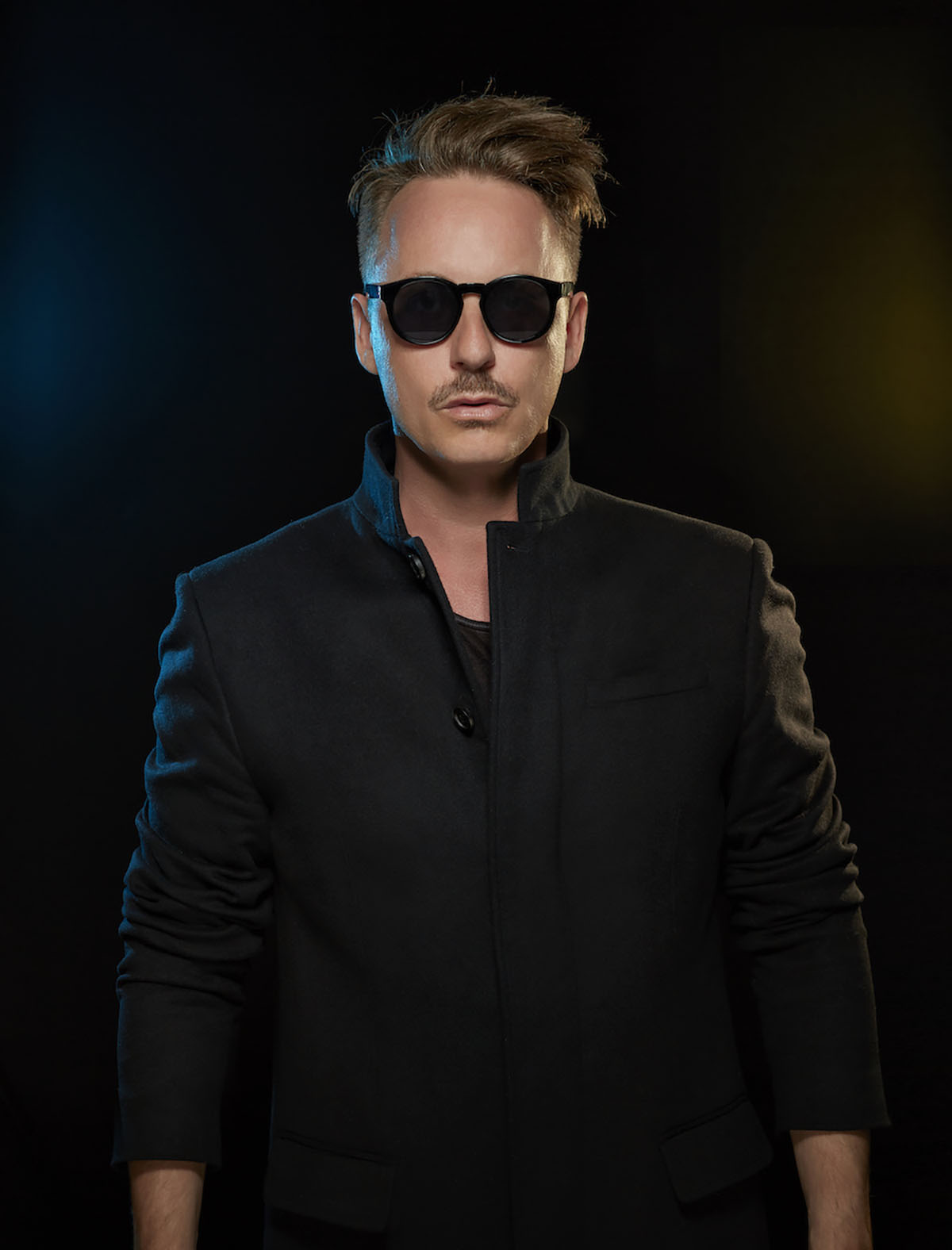 Last year the globetrotting selector travelled to Moscow, London, Paris, Milan, Rome, Munich, Miami, Dubai, Morocco, Casablanca, Marrakesh and Mykonos. The latter, he enthuses, was “amazing, there was like 3000 people on the beach, sunset, amazing food, the location was on a rock. The colours of nature, it was amazing. Everyone’s speaking about this place.” For the season of seventeen he announces his brand new Sunday residency for 13 dates at Scorpios Mykonos, which the club describes as an “ethno-electro sonic feast”. You still can’t beat Ibiza though, he says. “Ibiza has it all, from techno to house to cheesy to EDM. It’s everything compressed in one place for a long season.”

Ades’ popularity as a DJ stems from his authentic bon vivant attitude. With the Be Crazy night, and subsequent eponymous record label and radio show, he was “trying to have a modern Studio 54 party where everything is possible, everyone from different angles, the banker with the hipster and they’re having fun and they all tolerate each other. That was our goal – to get this crowd together and not look for a specific kind of person. I really like to have all different styles and personalities at my party.”

Back at Lio, the club shuts (early for Ibiza) at 5am. There’s a fleet of black four-by-fours waiting outside as an afterparty is quickly organised. Ades, still buzzing from his set, jumps in the back. In convoy we wind our way up the Ibizan hillside, a short delay as the line is stopped and questioned by local police, before being allowed to continue up to the party villa. Floor to ceiling glass wraps the edge of the house, overlooking an infinity pool and a view of the harbour. Turntables are set up ready and waiting, bar staff from the club have magically appeared in the kitchen and are already mixing cocktails. As the sun comes up, a rainbow streaks across the watery sky. Dancing stops and conversation flows. Ades and I stand by the pool. He’s looking forward to winter so he can slow down and make more music. From May to October, “every day is about the parties” (there’s an air of glamour in his pronunciation of parties, that distinct purr in the ‘r’), “when it’s over I can slow down. It’s magic, wintertime when everybody leaves the island. It’s so peaceful, you feel like there’s a particular energy on the island – it makes me feel calm in my heart and I can go back to the studio and have a creative session.”

We return to London weary from lack of sleep, sore livers and bruised feet. I wonder how he manages to keep productive and healthy while living in such a dangerously fun place. “Let’s say this. First of all, you have to be trained for this! I’ve trained so it doesn’t hurt so much,” he later jokes over Skype. But the island also has restorative powers. “We have the amazing fresh air, which is better than being in the city, and we have the sea and the good energy on the island. I think if I was going to do this and live in London, and I have the lifestyle that I have here, then I would look horrible!” He balances the nocturnal lifestyle by focusing on his health on weekdays. “The day after a party here you tan, go in the pool. Cover your ugly face! I go regularly to the spa and the gym as much as I can in the week. This really saves my life.” He’s also slowing down the parting. “Besides my gigs I’m not going out too much anymore. It’s impossible. If I’m playing two or three shows a week then I’m too tired.”

With Lio and Be Crazy, Ades has created a subversive music experience, open to hedonists and libertines with a taste for fine things. To him, underground isn’t just “when you’re kicking high end, or if you have tattoos, or if you play with vinyl. “If you play something that’s different and not so accessible to a huge crowd, then that’s underground. That’s a new movement or something that’s fresh.”

His philosophy? “For me, what is a perfect life? It’s when you’re healthy and happy and have good friends and have a job that you like to do. That’s it.” Amen to that.