You know those ‘influencers’ who brands and marketers are always trying to woo? Well, Julia Cameron De Villiers is one of the few who truly deserves the name. Jewellery designer to Oscar nominated actors; TEDx speaker; one half of an A-List life coach power couple via her marriage to wellness advocate Jean Pierre De Villiers… it’s impressive stuff. The fact that she claims descent from Virginia Woolf and photography pioneer Julia Margaret Cameron (from who she takes her name) almost seems like gilding on the Pre-Raphaelite lily.

De Villiers’ journey began during a summer of hedonism – one of many throughout her early twenties. Feeling lost, she experienced a moment where she consciously surrendered herself to what she would later call “the power of the universe” and embarked on a programme of personal transformation that culminated in her joining Feminine SuperPowers, the new “feminist lifestyle movement”.

Co-founded by fellow coaches Michelle Zelli and Cat Raincock, Feminine SuperPowers holds events for creatives everywhere from Shoreditch skate parks to plush West-End hotels. De Villiers has joined the team as its resident ‘Love Hack Guru’ and the movement is spreading at pace. With invitations to LA and Dubai, their fusion of feminine feminism, art-therapy, and positive masculinity looks set to break a few creaky boundaries in 2018.

By encouraging healing through group hypnosis, live coaching and science, the Feminine SuperPowers team aim to help their members finally harness their best life. Combining Sloane Street labels, attitude, and a spray can or two, they are on a mission to prove that feminism can be feminine, fashionable, inclusive and mighty empowering. De Villiers sat down with us to explain how it has changed her own life. 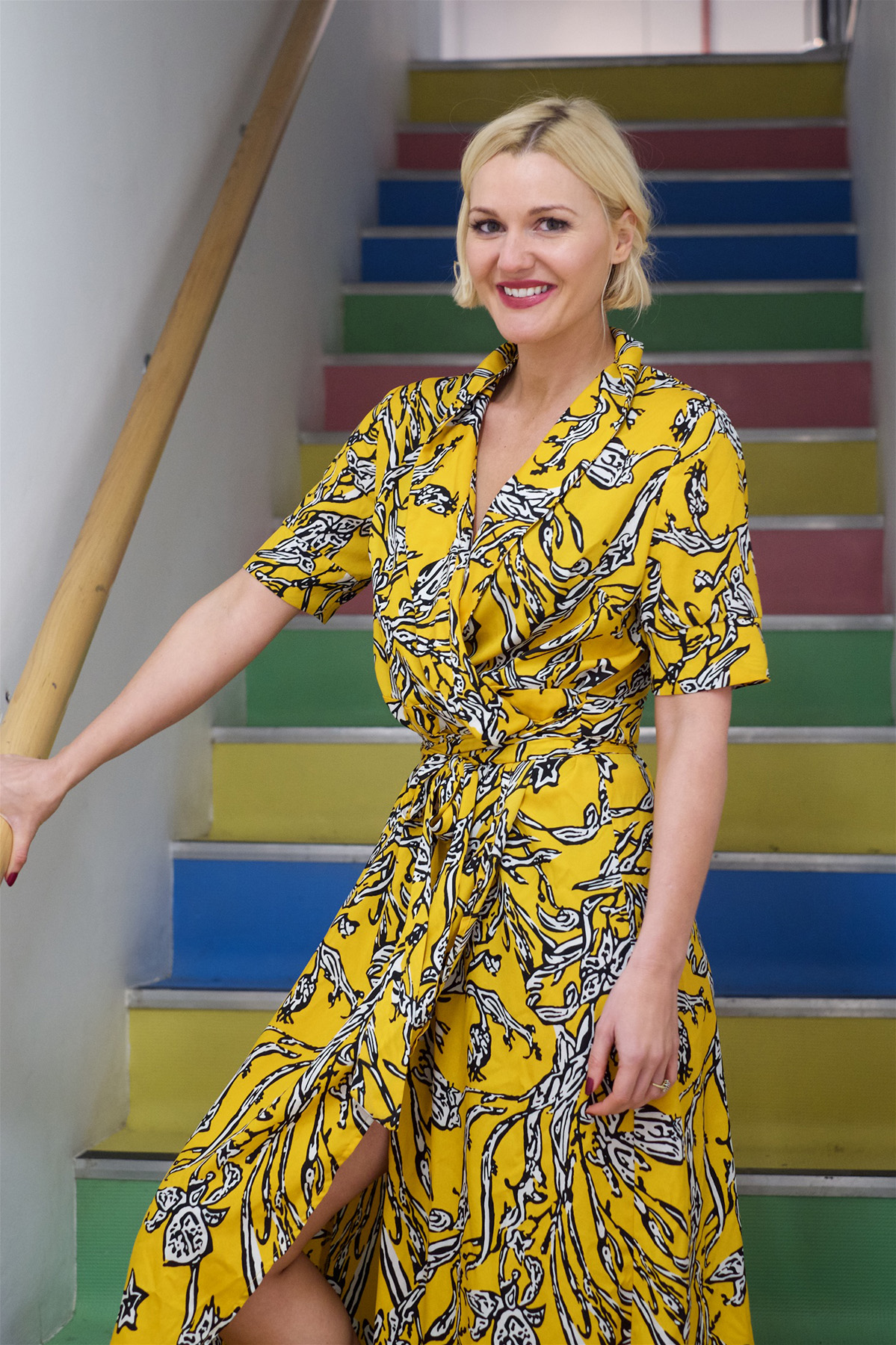 How did you hear about Feminine SuperPowers?
I met our founder Michelle Zelli through my husband and got to know her first as a friend and then as my coach. I loved the work we did and how it quickly helped transform my life. When she told me she wanted to bring her work to a wider audience, I knew wanted to be a part of it. She introduced me to Cat Raincock, with whom she co-founded the movement and we just sparked. We got together in an urban graffiti jungle to thrash out some art and ideas and soon after Feminine SuperPowers was born.

How did you begin your own healing process?
For a time I lived a quiet life in rural Ireland. Living in near solitude was hard but it pushed me to be creative and focus on things that held meaning. I made my health a priority, held my first speaking gig at a TEDx talk, and started writing a blog to share my life experiences. After finding my voice I felt ready to work in a collaborative set-up. I grew up feeling very alone and disconnected, so connection is something I’ve always craved.

Can you describe Feminine SuperPowers in one sentence?
A groundbreaking female empowerment movement inspiring women to stand up, show up and speak up, smashing their individual glass ceilings to affect massive personal change.

How important is fashion and the arts to your founding culture?
We embrace the sense of style in each other. Right now Cat, our yummy mummy, is a vision of spring fashion in feminine dresses with sheer and ruffle motifs. I have more of a vintage style that I like to combine with softer pieces from boutiques such as Never Fully Dressed. Michelle Zelli, the Godmother, embodies the Parisian attitude of Zadig & Voltaire wearing skinny combats and silk shirts. We love creativity in every form, not just the outcome but the process itself. Our meetings are held in spaces from graffiti studios to flower workshops, and our methodology for creating is organic and original. Our passion is our art and our art is our mission. 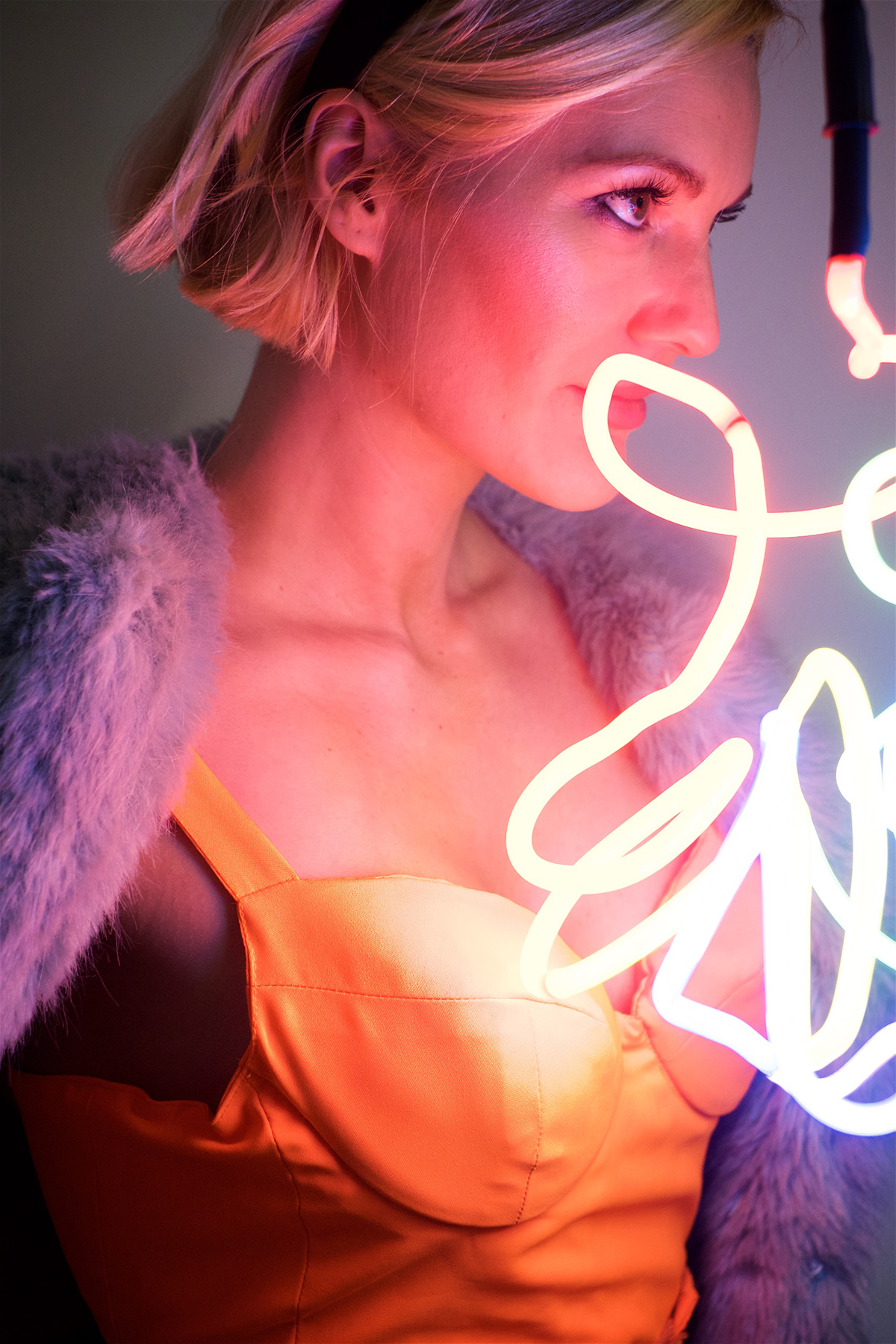 What can we expect from your events?
We get women singing, dancing and even crying together. The effects are that strong because of the psycho-spiritual element of what we do. We are relentless in ensuring we have the latest data and research to form new processes to help women move through their fears. Right now Michelle is working with physicists in the States who support the theory that the power of the universe can be harnessed to positively affect human behaviour.

What makes your movement different?
Feminism can be threatening to men. But we’re not about burning bras; we’re about building bridges with the healthy male and promoting positive masculinity. We believe there are huge numbers of men who don’t know how to fit into the world of empowered women. We try to shine the light for both women and men, on their terms. We have a series of headstrong female creatives joining our ranks, from Lauren Baker, who brings her amazing light installations to our events, to our guests. Everyone becomes part of the family and we continue our support through private groups online.

What beauty products do you keep in your bag during your events?
I always carry our Feminine SuperPowers third eye balm; it contains frankincense, which is deeply calming and is also a great lip moisturiser. I also make sure I have my Burt’s Bees spray to help steady my nerves before I go on stage as well as my Charlotte Tilbury red lipstick and highlighter.

What three love hacks can you give to women who are constantly falling into negative relationships?
Look at the patterns. What are you attracting? Our relationships become a mirror showing us how we need to work on ourselves. A negative relationship indicates the quality of the relationship you have with yourself. My own toxic relationships were born out of low self esteem and accepting lower standards. Avoid playing by other people’s rules instead of your own. Secondly, practise self-love as often as you can. Set powerful intentions to the universe and put yourself first. Finally, fuel your body and mind with nourishment. Feed them toxic thoughts, food, and company and see how they crave more toxicity in many inglorious forms. Shift your focus to things that bring you joy and high vibes. 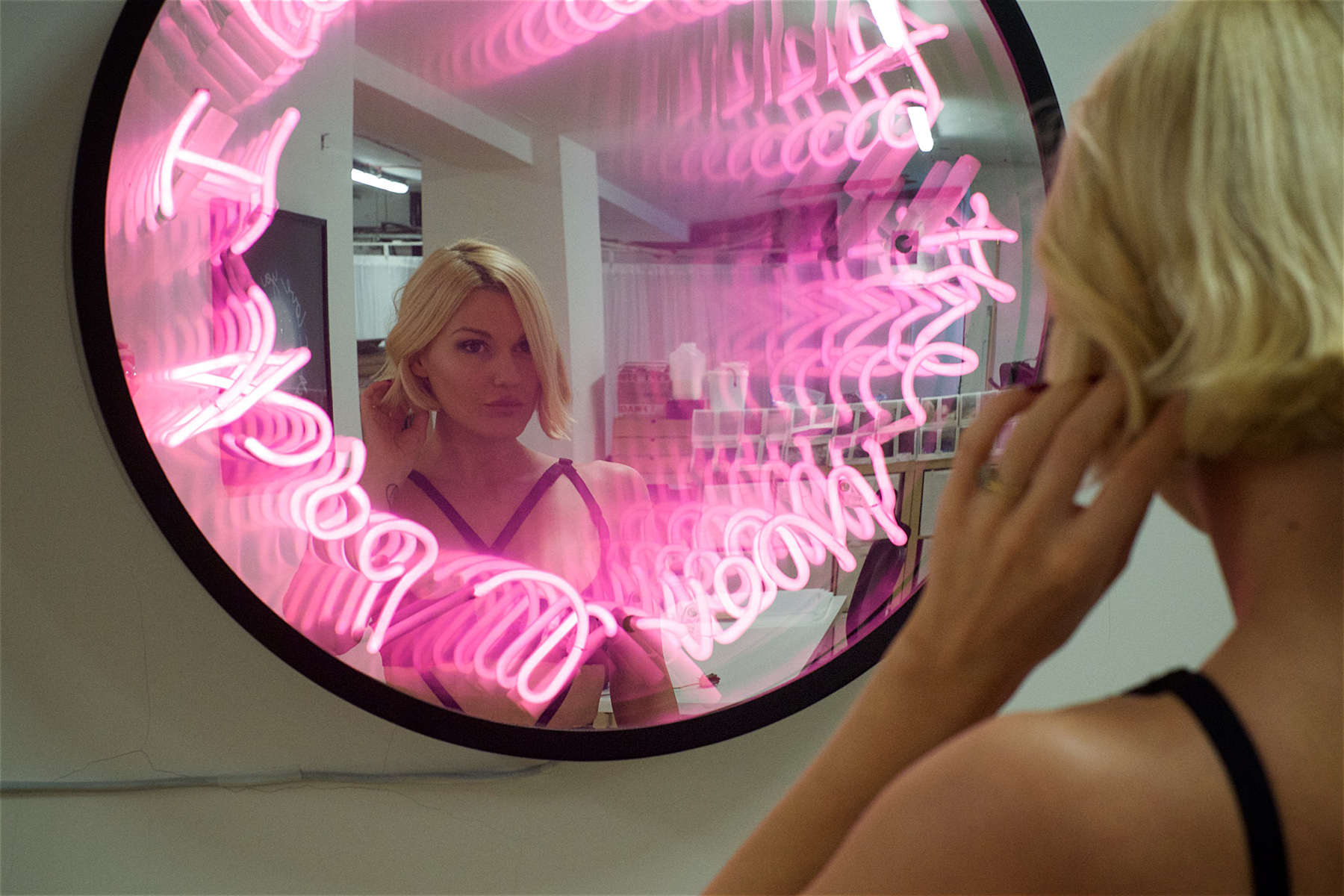 Has joining Feminine SuperPowers made you more politically aware?
It has opened me up to the political discussion on feminism. In a survey by The Fawcett Society 85% of people said they believe in equality yet only 11% would identify as a feminist. Many people don’t actually know what the term feminist means. With figures such as Donald Trump in power that represent toxic masculinity in all its glory, there has never been a better time to shine a light on the power relations that put women at a disadvantage.

How can we inject quality time back into our relationships?
In my relationship we make time to put aside our work and do things together that break the pattern. But scheduling quality time just for you is equally important and can benefit your relationship with others. Meditating gets me back to what I love, it’s grounding and that’s a key element for creatives as we tend to live in our heads. Practising presence not only makes you appreciate where you’re at now but it reminds us that life is not all about work and insta fame.

What can we expect from the movement this year?
We are in the process of launching the #himtoo campaign as a spotlight for the healthy male feminist. Looking ahead our Mother’s Day angle will focus on the often-complex relationship between mothers and adult children from both sides. We have workshops on Love Addiction and Love Attraction on the way as well as our next major event in London on June 9th. After that we’ll be flying to LA to organise bringing the movement to California. But that’s just the start; Dubai, NYC and Ibiza are also part of the wider vision. We’re going global.

Do you think we can stop the divisions in feminism?
I don’t think we can. From our perspective, if we tried to confront our critics we would be diluting our focus on building bridges with those that get our vision. Feminine Superpowers encourages connection, allegiance and camaraderie above all things. One of the first things Michelle will tell you is to consciously raise your mind above what is going on in your life, look down on it, and if the vibe is negative, disengage. The result is deeply liberating. 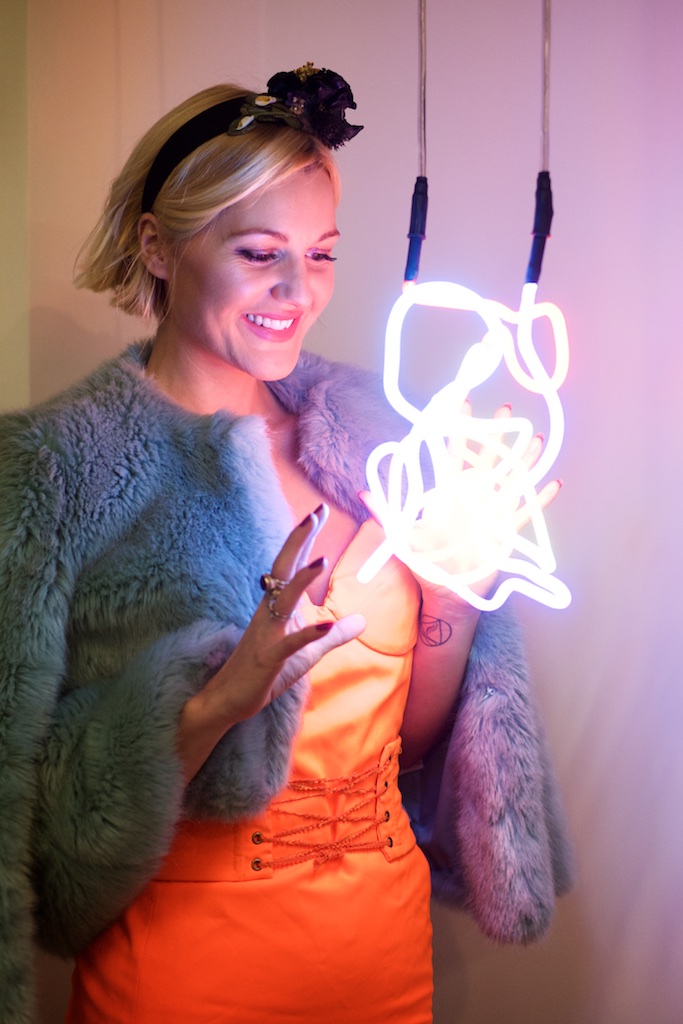 Why is asking the ‘universe’ for your ideal partner better than going out and seeking them?
If we are seeking something it means we don’t yet have it. If our focus is on ‘finding’, the universe will reflect that back to us and we will continue our search without results. But if we ask the universe to place our order as we would in a restaurant, our only job is to get ready for its manifestation. The energy of knowing that your ideal partner is on its way attracts that very thing.

You come from a long line of famous feminists; do their legacies still influence you?
My ancestors lived beyond the conventions of their day when there were no other female role models in the creative industries. I enjoy reading books about my ancestor Julia Margaret Cameron, who was the first female photographer of her era. Apart from photographing the likes of Charles Darwin, she championed the portrait style that makes her work look contemporary even today. Her niece Virginia Woolf also inspires me through her revolutionary writing and feminism that still rings true in 2018.

For many women, their 20s can be a difficult and directionless time. What advice can we give our younger ‘sisters’?
I had no idea what I wanted to do, I only knew I wanted to be creative. I was bullied at school and grew up desperate to be deemed ‘cool’. This lead me to constantly search for the next fix of significance that usually came in the form of a party or a pill. I suffered from serious FOMO, but this was a self-inflicted pressure fuelled by my own insecurities. I have been contacted by a number of younger women who feel an affinity with my story. My advice if you are suffering as I did would be to upgrade your environment and find positive role models and teachers to surround yourself with. Focus on what you are putting out to the universe and find relief in connecting with others who are on the same journey.

For updates on upcoming FSP events, head to the Feminine SuperPowers website.