The London-based musicians talk humble beginnings, blazing an original trail and ‘2 2 Karma’, their most personal album yet

Many make the claim, but few artists have truly ‘done it their way’ quite like Foreign Beggars. As rap aliases Metropolis (Ebow Graham), Orifice Vulgatron (Pavan Mukhi) and DJ Nonames (James Miller), the hip hop trio have released music for over a decade under their self-made label Dented Records, as well as championing the rise of several other British underground artists. They’ve also taken international tours supporting everyone from Snoop Dog to the Proclaimers, relentlessly evolved their genre-defying sound, and produced eight critically acclaimed studio albums – including the Best Unsung UK Hip Hop Album of All Time according to DJ Magazine. Graham, Mukhi and Miller have come a long way since their debut album ‘Asylum Speakers’. “When we started putting records out it was only a record, so obviously everything was to do with the record, the artwork, and then the little strategy you had to put it out, and that was it,” says Mukhi. Throughout the 90s you could most likely find Graham and Mukhi hosting pirate radio shows or throwing drum and bass warehouse raves. By 2003 the three had united alongside producer Dag Nabbit and were sending packages to every and any radio station that would listen.

“We just played music that we rated, we started banging dubstep because we loved it, and we just wanted to show people exactly what we are about” 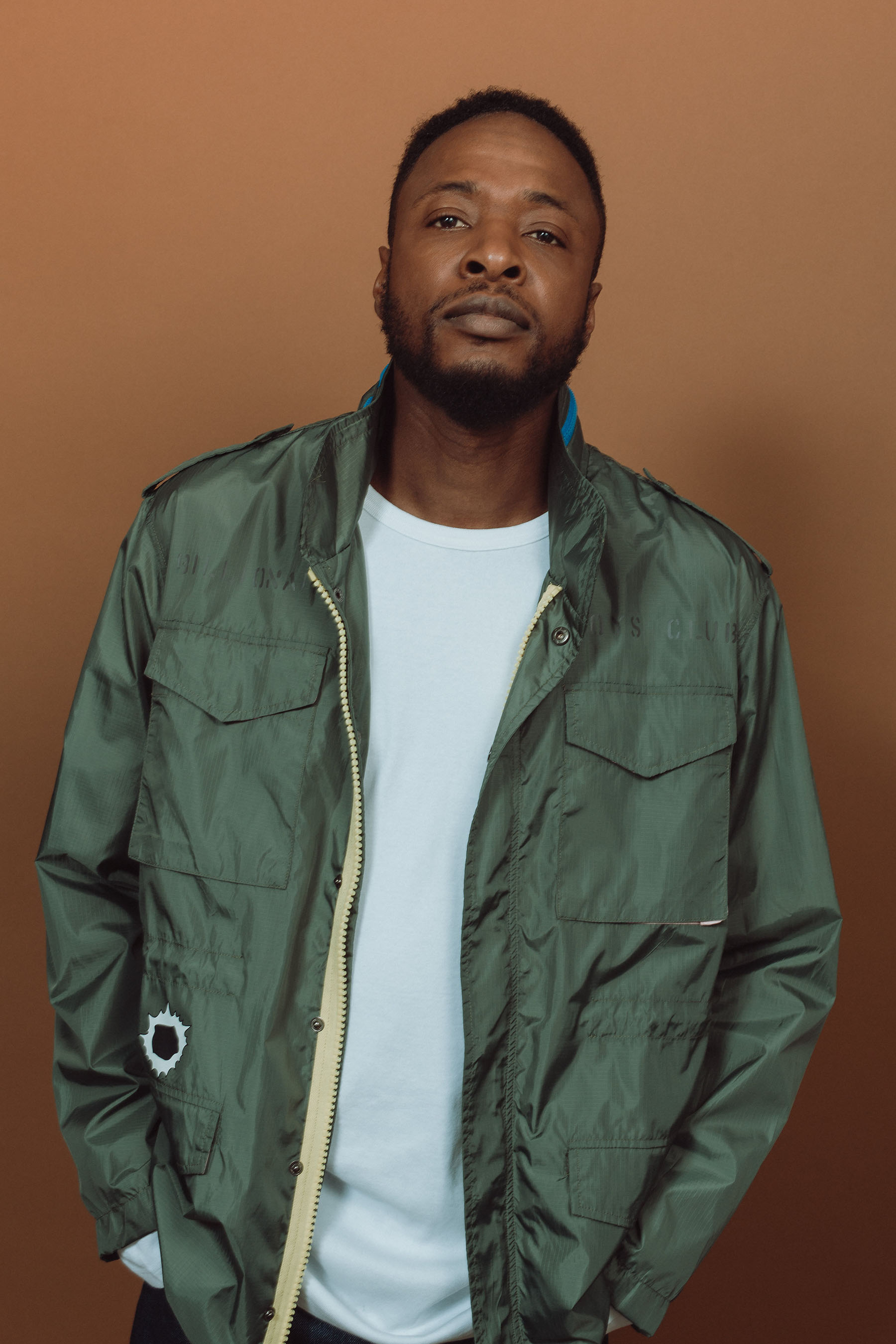 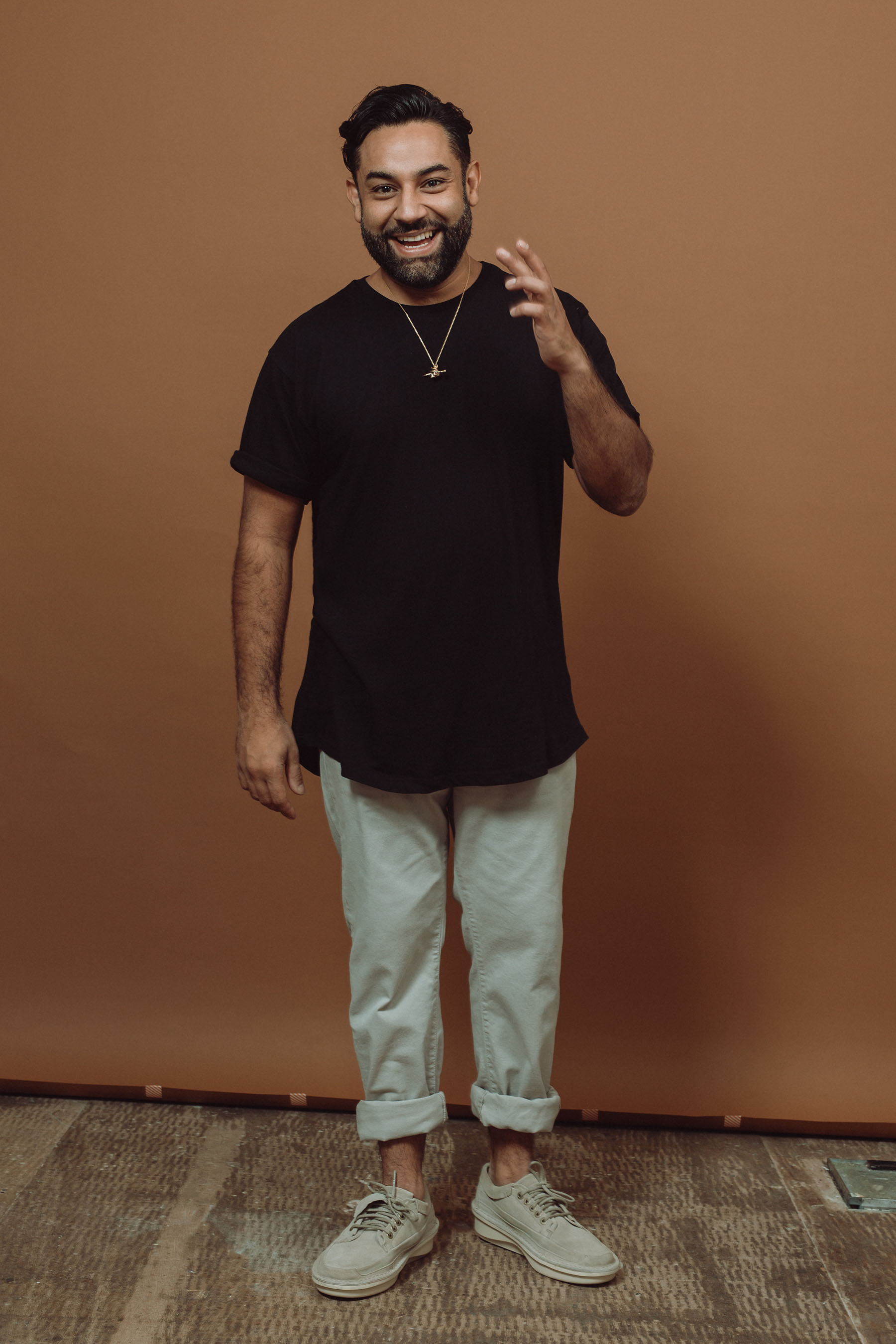 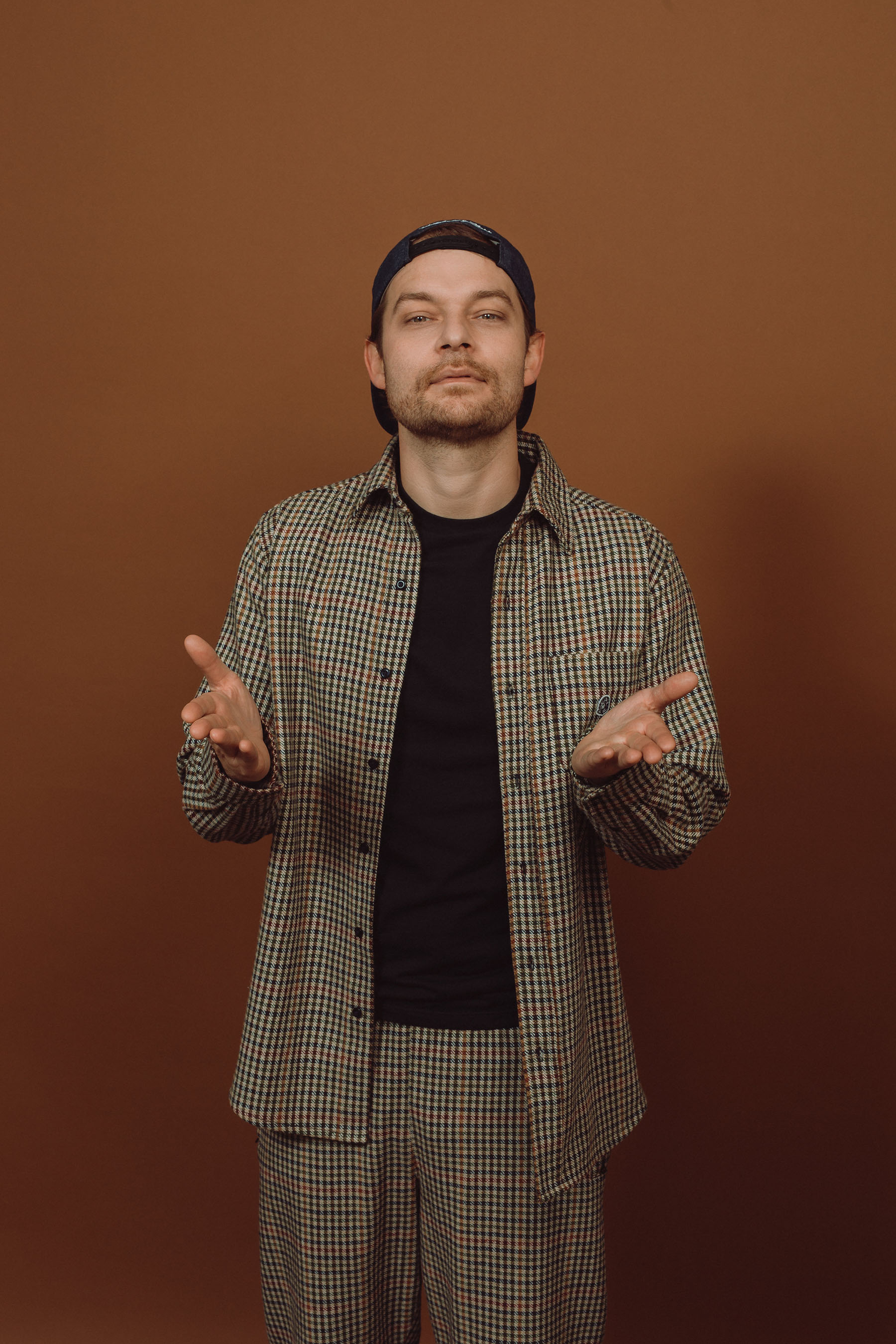 Their unwavering passion and appreciation for their craft has seen the group journey through boombap, glitch, grime and bass. Their sound eventually became synonymous with electro-dance beats and dubstep thanks to collaborations with big-name producers Skrillex and Noisia, followed by the opening spot on The Prodigy’s 2010 UK tour. But the process that lead the trio to explore such a broad spectrum of musical genres was much less intentional than many fans may believe. “We just played music that we rated, we started banging dubstep because we loved it, and we just wanted to show people exactly what we are about,” explains Graham. “And because we tour a lot, we get to see first hand what’s going on all around the world,” Miller interjects. “That’s really inspirational because we get to see new bands, and meet local rappers, so we’re constantly in the mix and I think that means you can never really get stuck in one vein of music.” 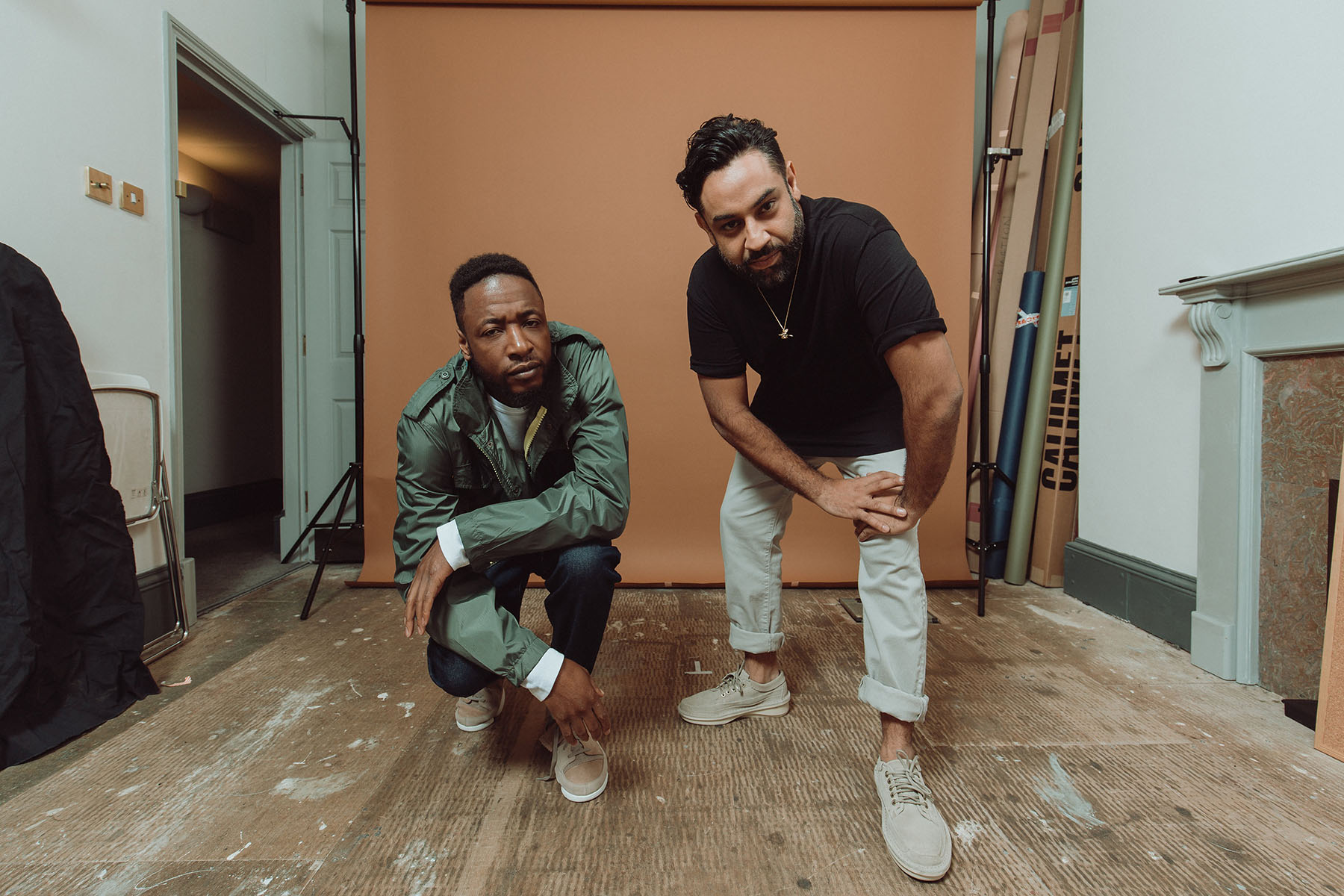 With such a diverse repertoire, knowing what to expect from the new album ‘2 2 Karma’ was tricky. No longer searching for their niche but instead embracing multiple genres, Graham says they often don’t know the direction an album will take. “We were looking at what angle we were going to approach it from, and then we slowly just started building the tracks together, though I’d say it really came together when Bangzy got on board. It kind of gave the album a specific sound.” While live streaming on social media to more than 60,000 fans, the trio stumbled across Bangzy, an up-and-coming producer from Dubai. Within a few short weeks, Mukhi met with the teen and brought his music back to the studio. “With this album we definitely wanted to come back to rap music and reconnect with the essence of what Foreign Beggars was lyrically, and I think those beats just brought it out of us, they’re quite lamenting and emotive but also very current… they really inspired us a lot.” 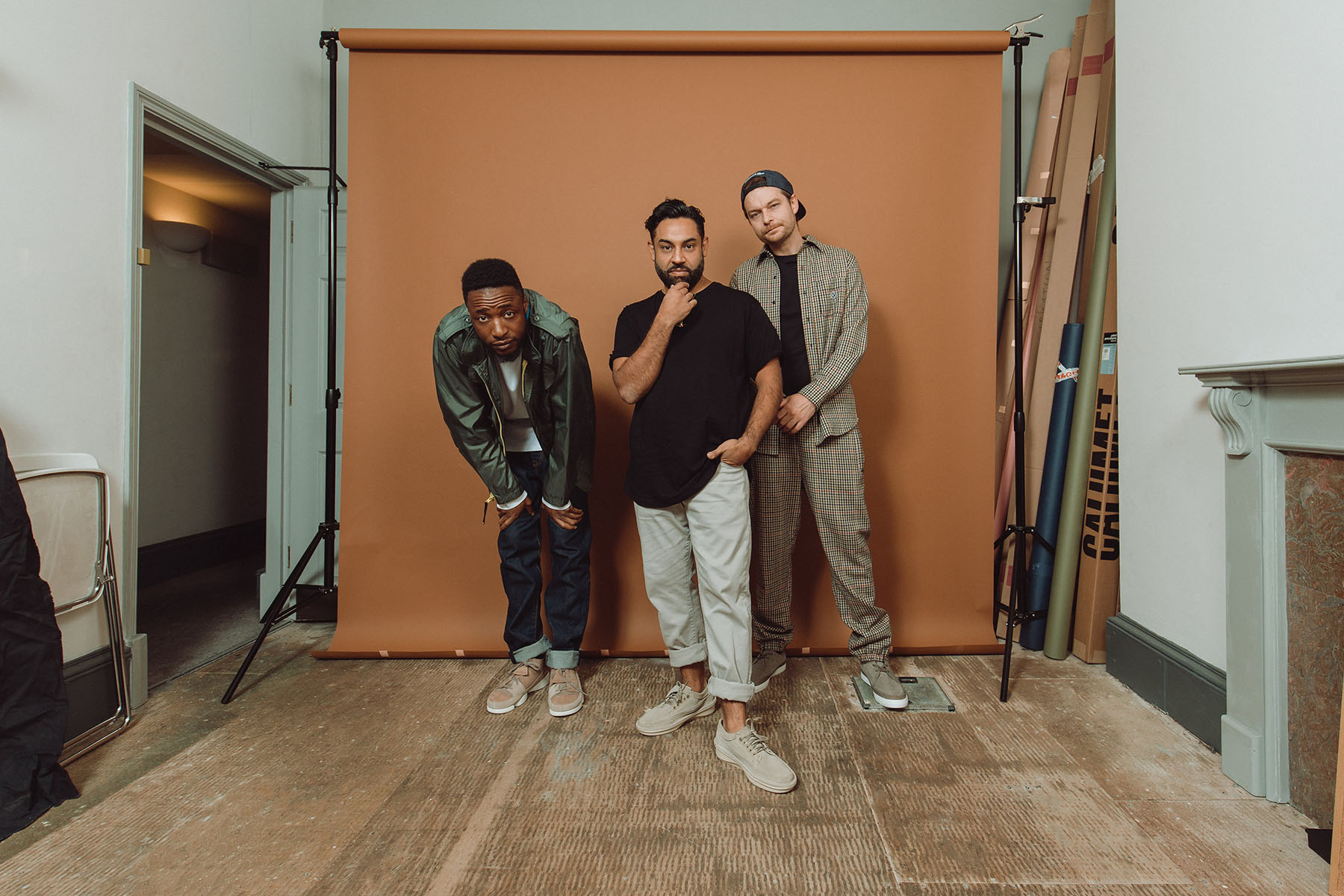 “I think we’ve always just been open minded,” Graham adds, “And y’know, anyone can send us something and if it’s a vibe then it’s a vibe, whether it’s techno or whatever. We’ve just always been open.” One thing that can be anticipated from the new album is a plethora of collaborations from talents that defy traditional understandings of hip hop. An unforseen addition to the track ‘6 Million Stories’ is London poet and spoken word artist Kate Tempest, who has been a friend since the early stages of their careers. “Back when she was like 13, 14 years old we went to all the same open mics years and years ago, before she got a record deal. It’s been so great to see her grow and succeed,” beams Miller.

“I think we’ve always just been open minded,” Graham adds, “And y’know, anyone can send us something and if it’s a vibe then it’s a vibe, whether it’s techno or whatever. We’ve just always been open.”

“We just wrote the song about our experience of London and the way that the city can be and what it can do to people, and that works so perfectly with Kate’s commentary on living in this city and what the city can do for you,” Mukhi explains. “And I think that a lot of the collabs on the album came together really organically,” Graham muses. “I feel like all the production on there is super current, we’ve got some amazing producers, and when you’ve got producers like that on board and you explain your direction and your vision and everyone pulls onboard.” He pauses. “I don’t know, I feel this album is really special.” 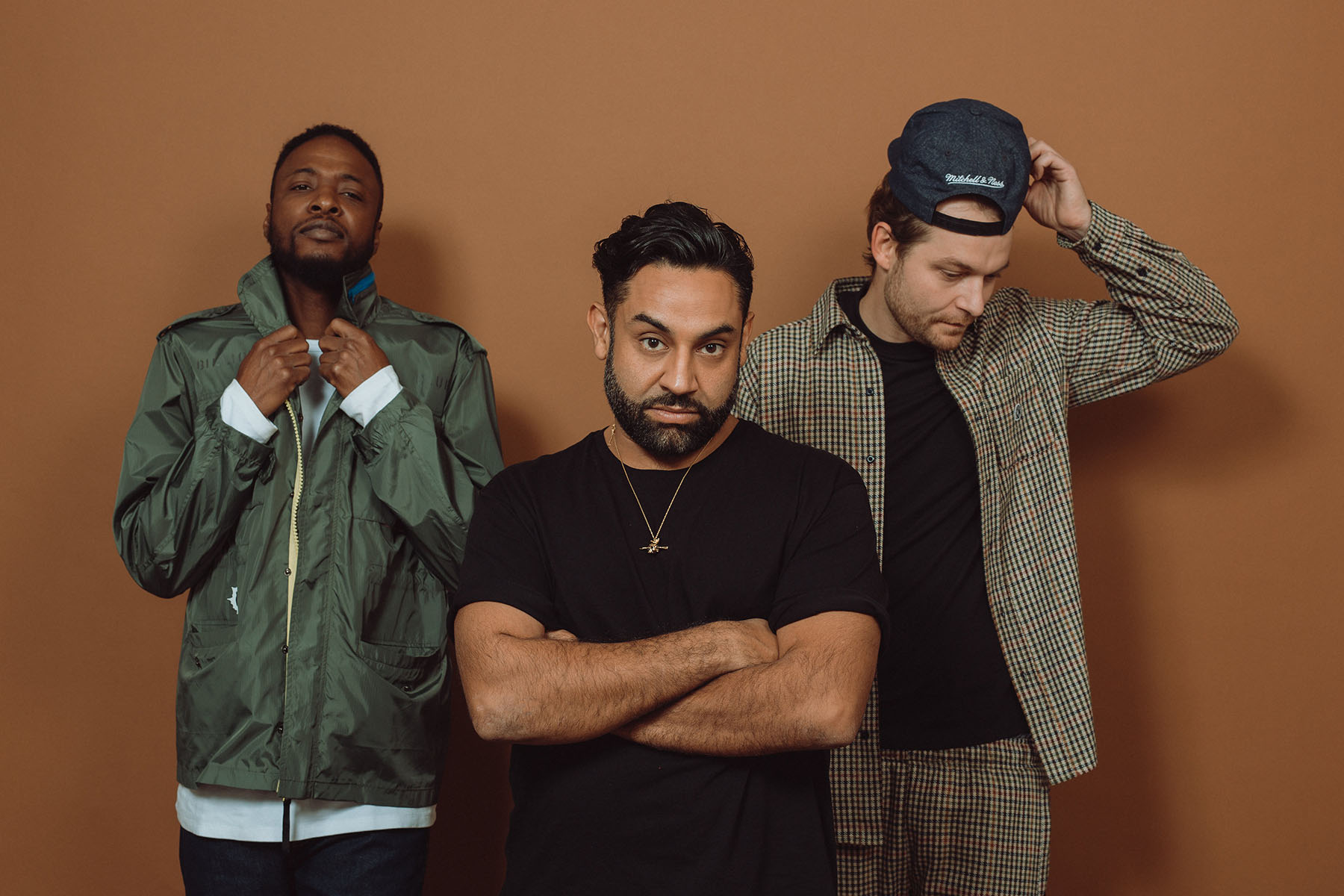 Their collaborative approach expands beyond just their sound as they mark their return with a music video for the single ‘Bosh’, directed by London female duo XIPHI. The video flips the outdated female stereotype in hip hop culture and presents an empowering narrative of vigilante justice against the current political climate. Mukhi gushes about their work: “Melody and Lauren, we trust their vision 100%, and we thought it was wicked. I think that when we do work with directors we try not to throw too much at them, because it’s always good to have an unadulterated approach when you’re collaborating.” There’s a relaxed rapport between the three, with conversation swinging between humorous anecdotes and political opinion with ease. They giggle like teenagers when Graham recounts one particularly embarrassing moment from the early years: “We did a show at Jazz Cafe and I think it was a launch party or something, it was quite high-profile, and I suddenly realised halfway through the set that Pav was wearing a suit with a hat, and I was just wearing a t-shirt.”

“I do feel like on this album that we did want to speak honestly, and we wanted people to be able to listen to the record and get a better idea of who we are as people and where we stand,” says Graham.

The mood shifts however when Miller mentions social media, and the impact it is having on the industry. “Image and the visual aspect of what you do has taken a much bigger role in the whole thing now. Ain’t no one just trying to listen to your record anymore, they want to see what you look like too. And now even if you’re an underground artist you’ve still got to follow all this social media, Instagram presentation shit like a fucking popstar, which I think is kind of strange.” Graham agrees: “I think that’s the thing I’ve seen change the most over time. Seeing how much social media is playing a part in this, it feels almost as if you can probably become successful more for your image than your talent these days.” 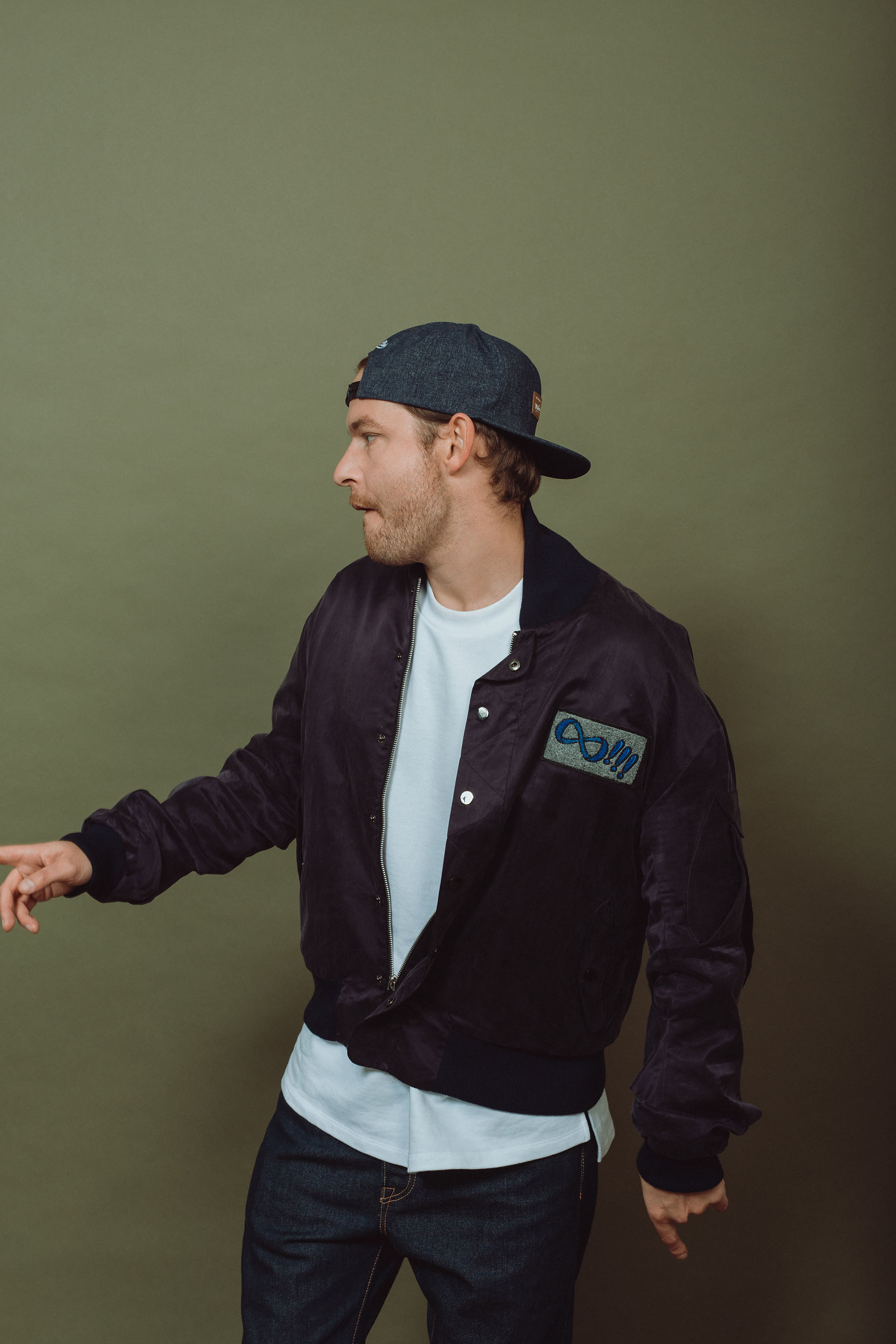 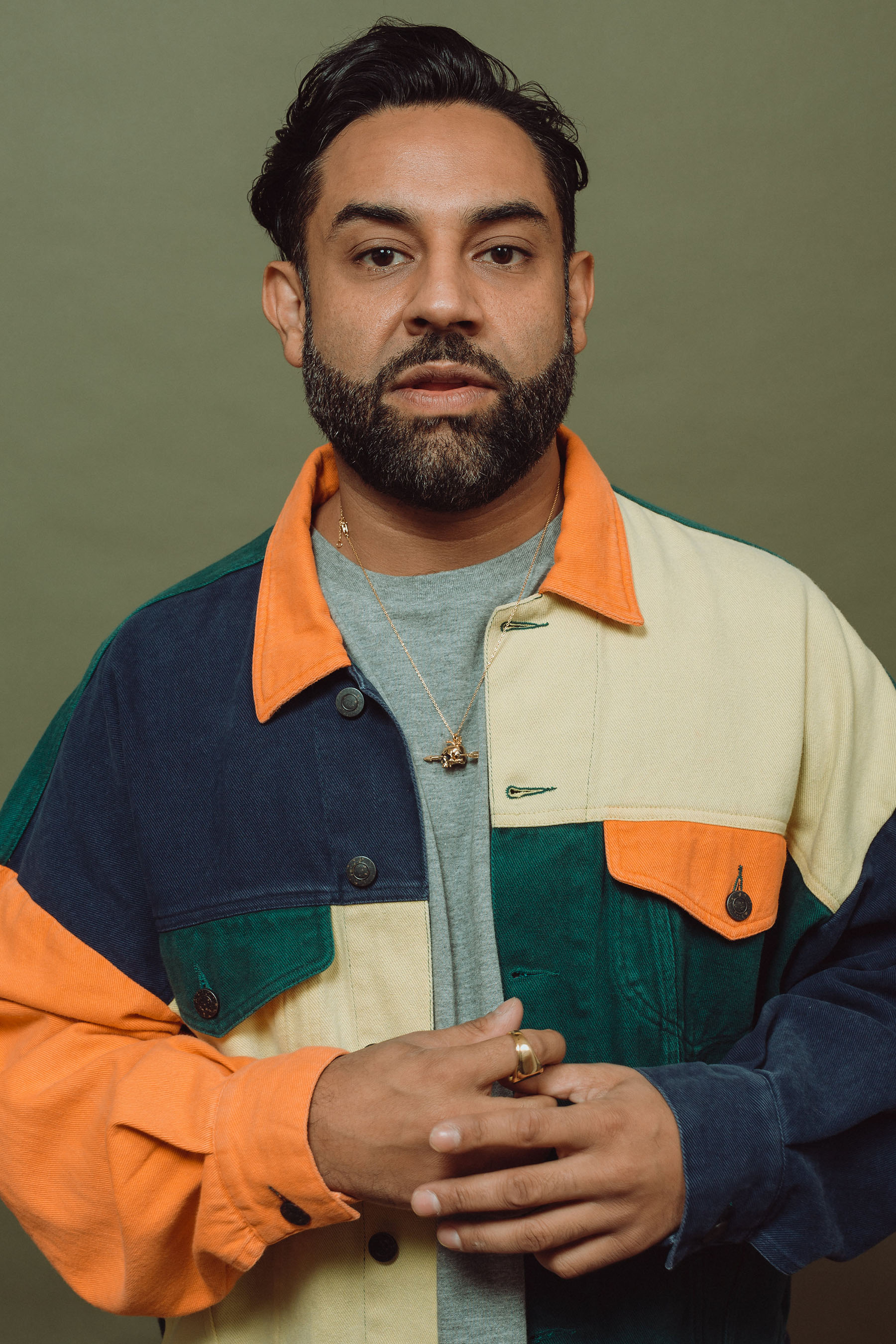 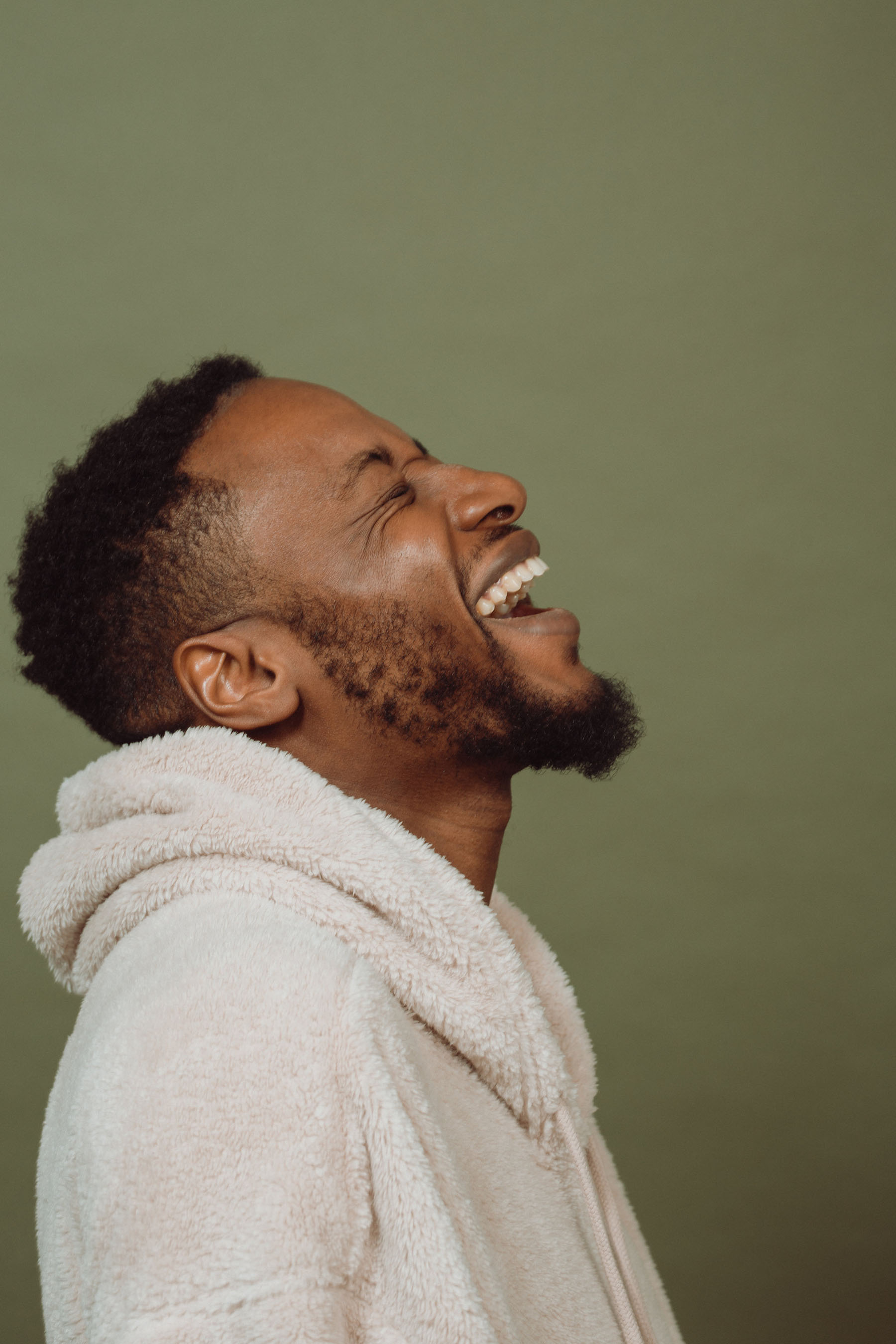 And while the addition of stylists may have altered the group’s appearance, this album sees a return to their rap routes that initially propelled them to fame back in 2003. They have harnessed their industry experience to candidly express social and political commentary on ‘2 2 Karma’ with the hope of inspiring a new generation of hip hop artists to do the same. “I do feel like on this album that we did want to speak honestly, and we wanted people to be able to listen to the record and get a better idea of who we are as people and where we stand,” says Graham. Miller agrees: “I would love to see more young people speaking honestly about what they see and getting back to the era of social commentary. It’s always going to be easier to talk about getting rich and getting women and partying – that’s just the easiest thing to talk about – but there’s so many difficult topics to address and I’d definitely like to hear more of that.”

And what advice would he give to any aspiring artists? “I think for anyone coming up I would say make sure you have a bunch of people around you that have a similar vision and similar motivation as you do, and the closer control you keep of the business side of things and the better communication you have in your team, then the stronger you can be in your music.” The group may have evolved over time, but one thing holds true: they’re true role models for original, eclectic and engaged British music at its best.

Catch Foreign Beggars live including special guests on 21st April in London, and listen to the new album ‘2 2 Karma’, available to purchase now.