With its crunchy, grass-green spears and fresh earthy taste, asparagus is one of those ingredients that seems to epitomise spring. In Britain, its harvesting season traditionally starts on St George’s Day, April 23, and continues until the summer solstice on June 21, so you can expect to find its verdant nutty flesh appearing on your plate and in menus over the coming weeks. As with so many vegetables, it’s poor cooking that generally gives asparagus a bad rep – leave it a few seconds too long in the steamer or saucepan and you’re left with a stringy, teeth-clinging mush.

So how should we be serving this spring-fresh veg? Whether you’re partial to dipping yours in the yellow ooze of a soft boiled egg or prefer them paired with a creamy risotto, head chef Steve Groves of Roux at Parliament Square has (proverbially and literally) stepped up to the plate with a trio of delicious recipes to delight your tastebuds. Just don’t eat them in succession if you want to avoid that infamous side effect…

This recipe is a really simple one that relies on great ingredients in a tried and trusted combination. The rich yolk from quality eggs is perfect with asparagus and the Berkswell, a British ewe’s milk cheese, compliments the two beautifully. 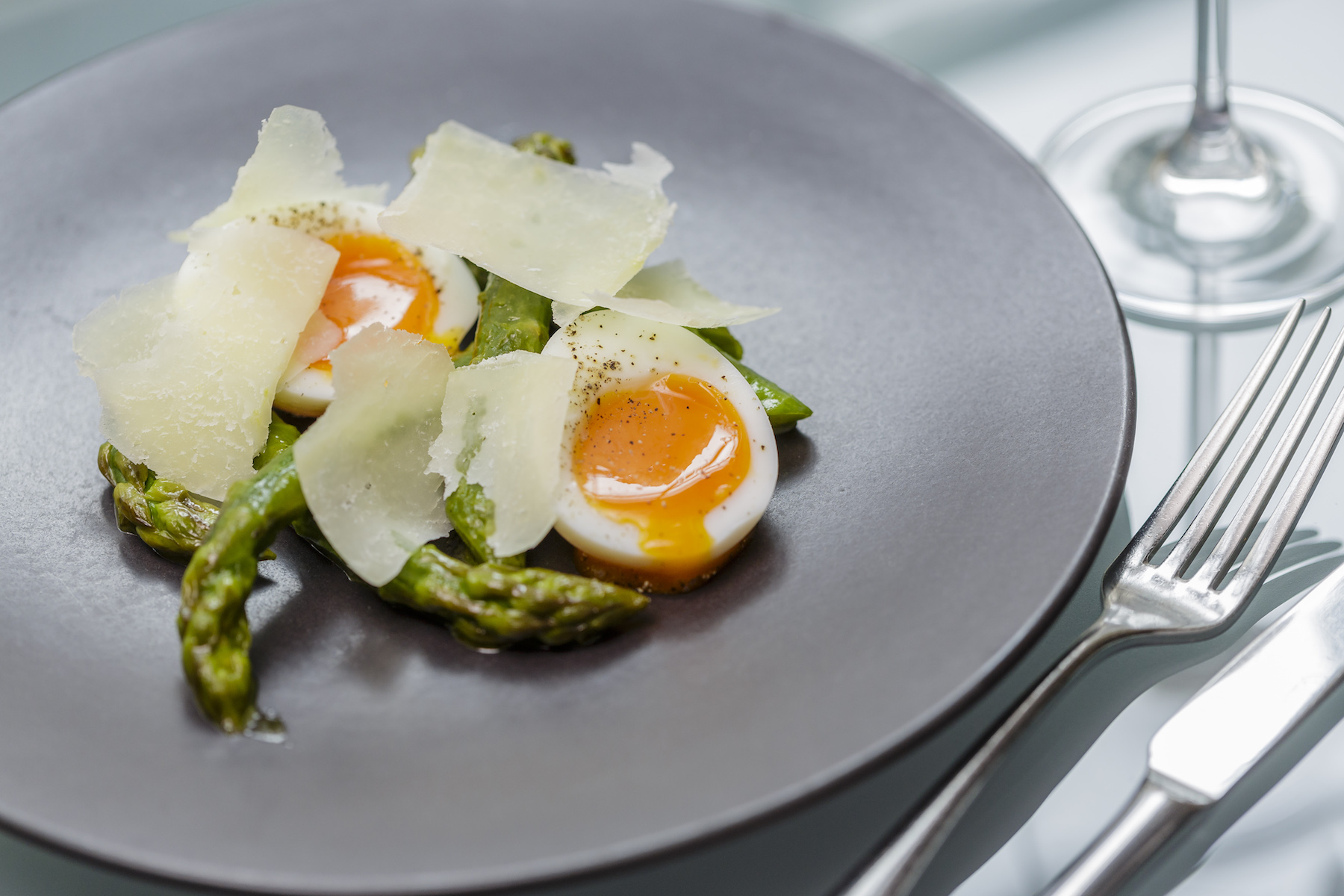 1. Break the asparagus spears by holding each one gently at each end and bending until it breaks at its tender point. At this point take all the tougher ends and juice them, or blend with a little water and strain. Reserve the juice.

2. Heat a pan wide enough to contain all of the asparagus in a single layer then add the butter, followed by the asparagus. Season with a little salt and cook until the asparagus just about starts to roast.

3. Add the asparagus stock and then add chicken stock to just cover the asparagus if necessary. Bring to the boil and cover with a lid or foil. Cook for 3 minutes then remove the lid and continue to boil until most of the liquid has reduced away and what is left forms an emulsion with the butter, giving a nice glaze to the asparagus.

4. Bring a pan of water deep enough to contain the eggs to the boil, add the eggs and cook for 5 minutes. Cool slightly under cold running water but peel them whilst still warm. Cut in half and season with salt and pepper.

5. Scatter the asparagus across four plates and top each with an egg. Finish with some Berkswell cheese shaved over with a vegetable peeler.

This dish is something I love to serve in the spring when it starts to warm up a little bit. It can be a lovely sharing dish and whilst here I have used scallops, I will generally use all sorts of shellfish – prawns in the shells and crab are other favourites. I like to serve it with some crusty bread to mop up that delicious butter. 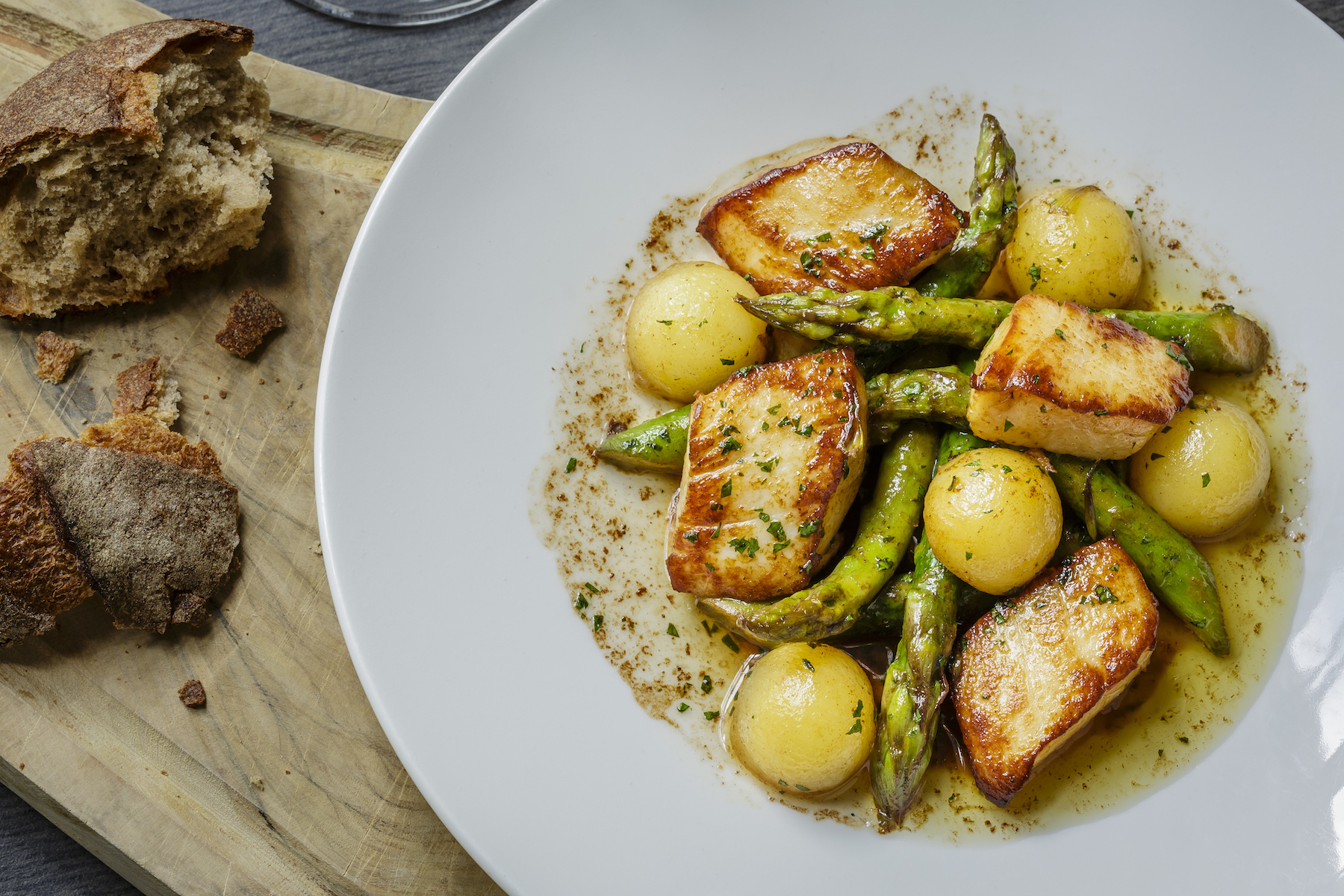 1. Cook the Jersey royals in a pan covered with salted water until tender, strain and set aside.

2. Bring a large pan of salted water to the boil, then cook the asparagus spears until tender.

3. In a frying pan, heat a little sunflower oil over a high heat.

4. Pat the scallops dry with kitchen paper, season with salt and place flattest side down in the pan. Cook for a minute or so to get a nice golden brown crust, turn over and reduce to a medium heat, then add the butter followed by the garlic, lightly crushed. Cook for a minute or so and remove the scallops. Season the butter with a fine grating of lemon zest, a squeeze of juice – then the marmite.

5. Toss the potatoes, asparagus, parsley and scallops through the butter and serve immediately.

This risotto recipe is designed to be really quick and simple. It would possibly get me lynched in Italy, but in my view it yields great results – and was deemed good enough by a two star chef to use in his kitchen! 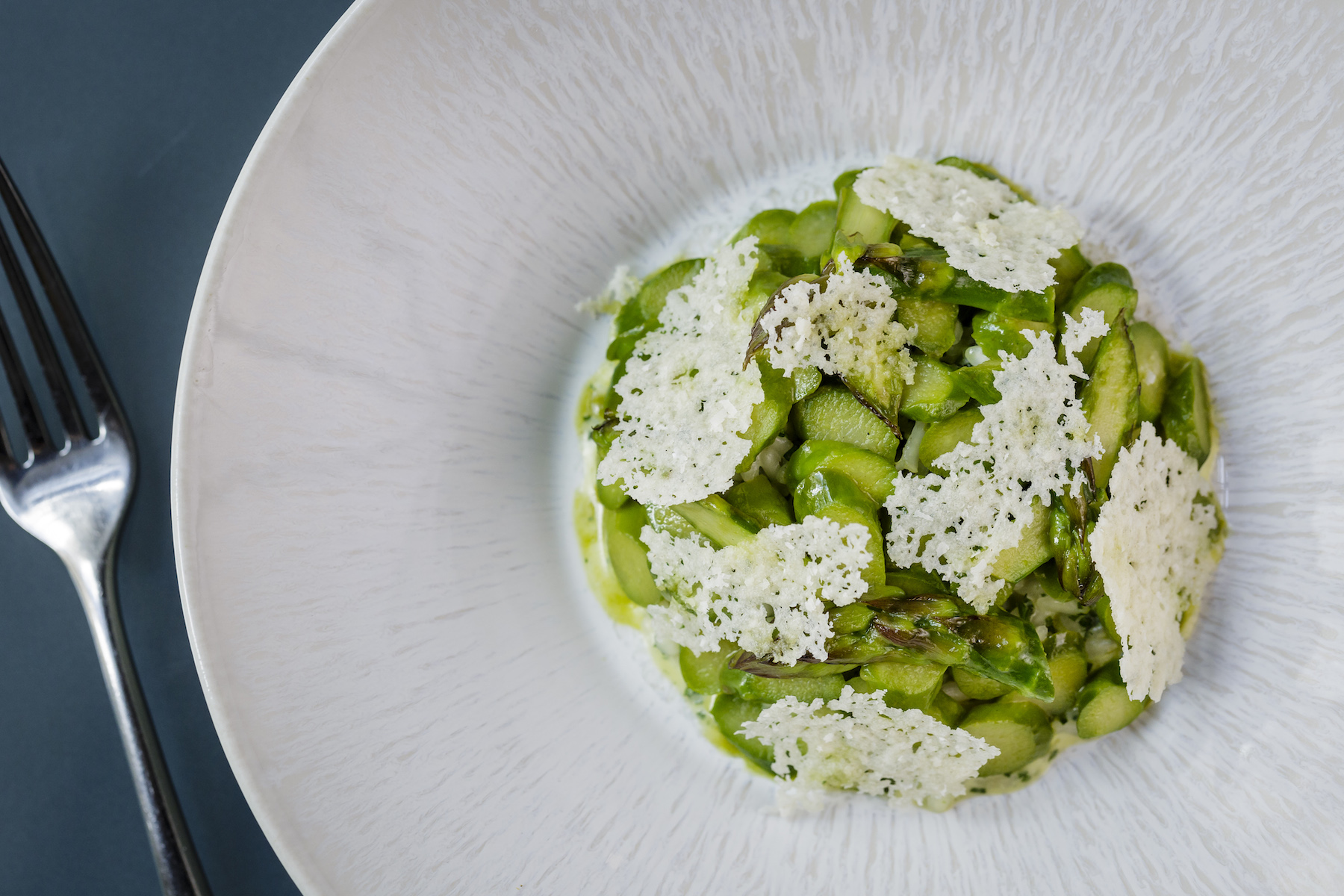 For the baked parmesan

1. Bring a large pan of water, at least 2 litres, to the boil. Season with the stock concentrate.

2. Add the rice and return to the boil. Cook for 5 minutes, making sure it doesn’t catch on the bottom – but don’t stir too much. Strain through a colander or sieve. Spread into a single layer on a baking tray or two and put in the freezer until completely frozen. At this point you can bag up the rice in portions and keep stored in the freezer ready to pull out for a quick risotto at a later date. Remove 240g of the rice from the freezer and defrost.

3. Bring the stock to the boil and add the rice. Continue to boil whilst stirring regularly until the stock has reduced by about ¾. Add the mascarpone and boil until you have a creamy consistency. Finish with the parmesan, herbs and lemon, then check seasoning. If it becomes too stodgy and thick, add a little more stock to loosen.

1. Break the asparagus spears by holding each one gently at each end and bending until it breaks at its tender point. At this point take all the tougher ends and juice them or blend with a little water and strain. Reserve the juice.

2. Slice the asparagus into rounds all the way up to leave a 2cm tip, then slice the tip in half lengthwise.

For the baked parmesan

2. Mix the flour and parmesan together and sprinkle a thin layer on to a parchment lined baking tray. Bake for around 5 minutes or until golden brown. Alternatively cook in the microwave in 20-second bursts.

3. Serve the risotto in a mound in the centre of a bowl and cover it completely with the asparagus. Finish with some of the broken baked parmesan.