Can Dougie Poynter Help Return UK Rock to Its Former Glory? PHOENIX Has the World Exclusive on New Band INK

Though he’s already enjoyed stratospheric success with his first band McFly, Dougie Poynter is working from the ground up on his next big venture. INK are a three-man homage to good old-fashioned rock music, marking a maturing progression in sound for the ‘fit one from McFly’ and the blistering debuts of his bandmates, lead vocalist Todd Dorigo and drummer Corey Alexander.

With a sound hailing from a bygone era of rock n’ roll and a definite West Coast influence, INK have the kind of staying power the genre hasn’t seen since Queens of the Stoneage. Title track ‘Heaven’ begins with a galloping riff from Dougie, swiftly followed by a guitar chord straight conjuring the dusty trails of the Wild West and rumbling, baritone vocals. From the get-go, second track ‘Fever’ showcases stadium-worthy harmonies, and by the pre-chorus the crashing hi-hats have us lost in the imaginary mosh pit.

In a world of carefully engineered brand hookups, truly organic artistic collaborations are all too rare. They seem a somewhat quaint and romantic hangover from a past cultural era – think Mick Jagger and Keith Richards bumping into each other on the platform at Dartford train station (true story).

In a world of carefully engineered brand hookups, truly organic artistic collaborations are all too rare. They seem a somewhat quaint and romantic hangover from a past cultural era 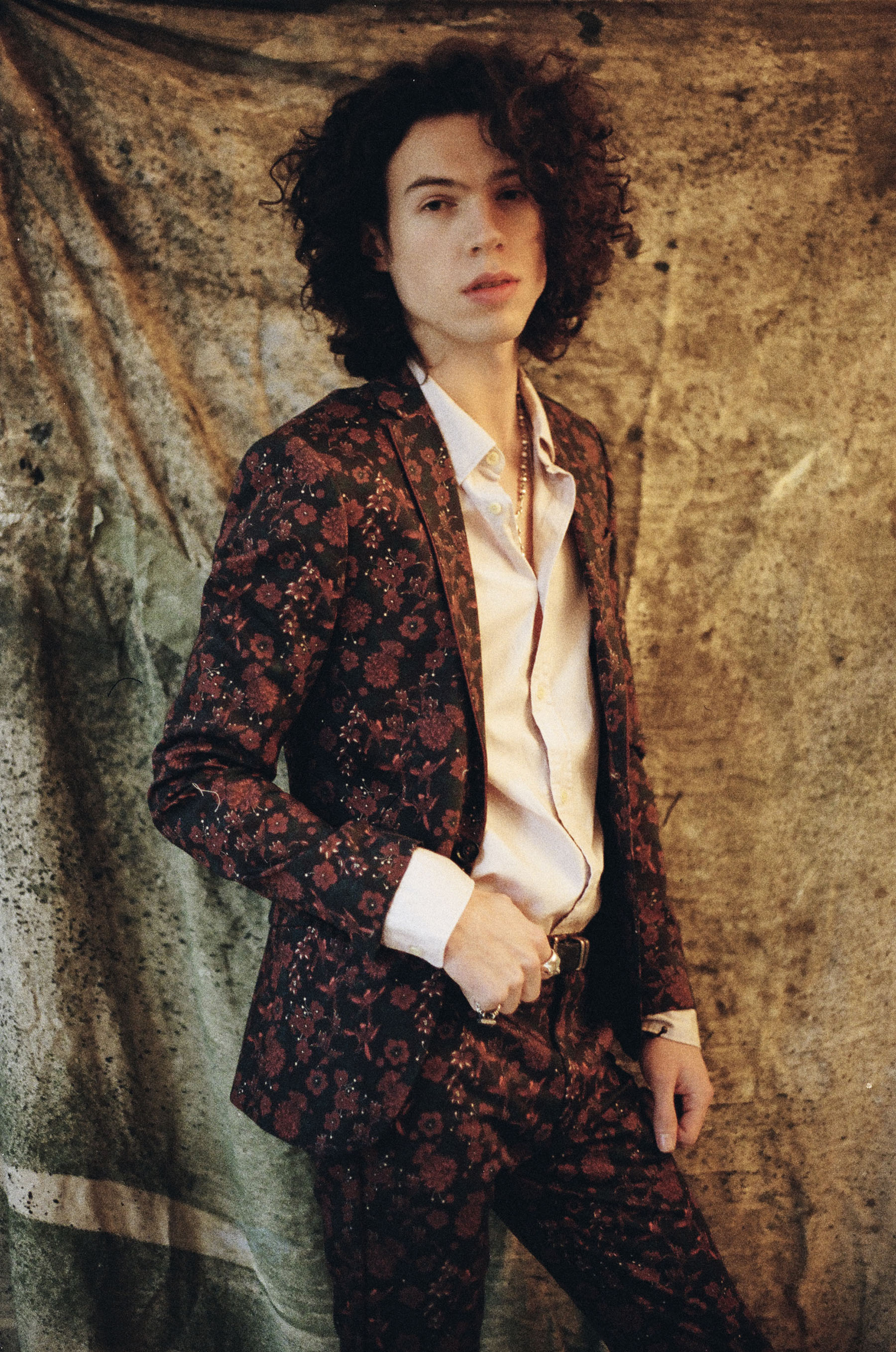 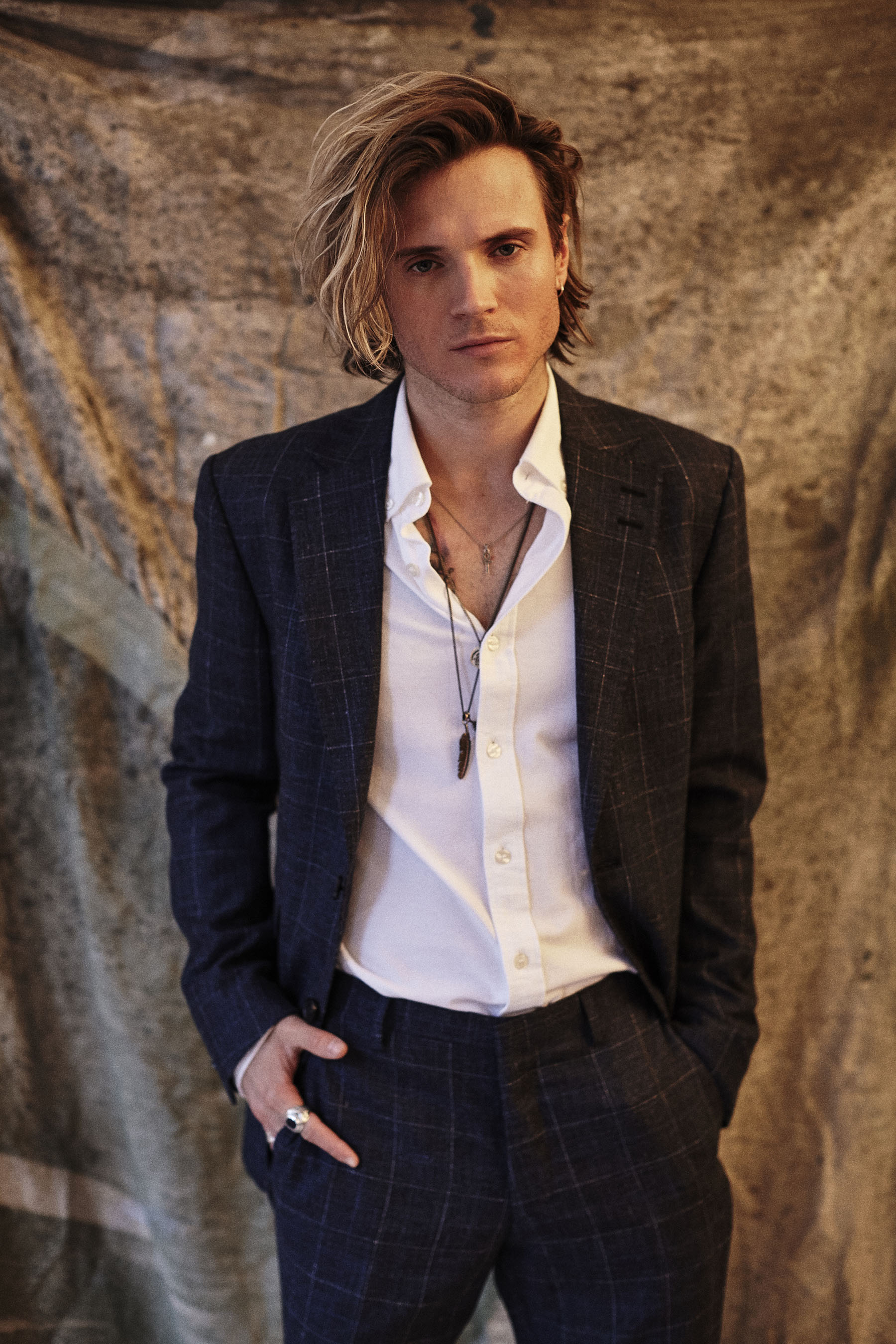 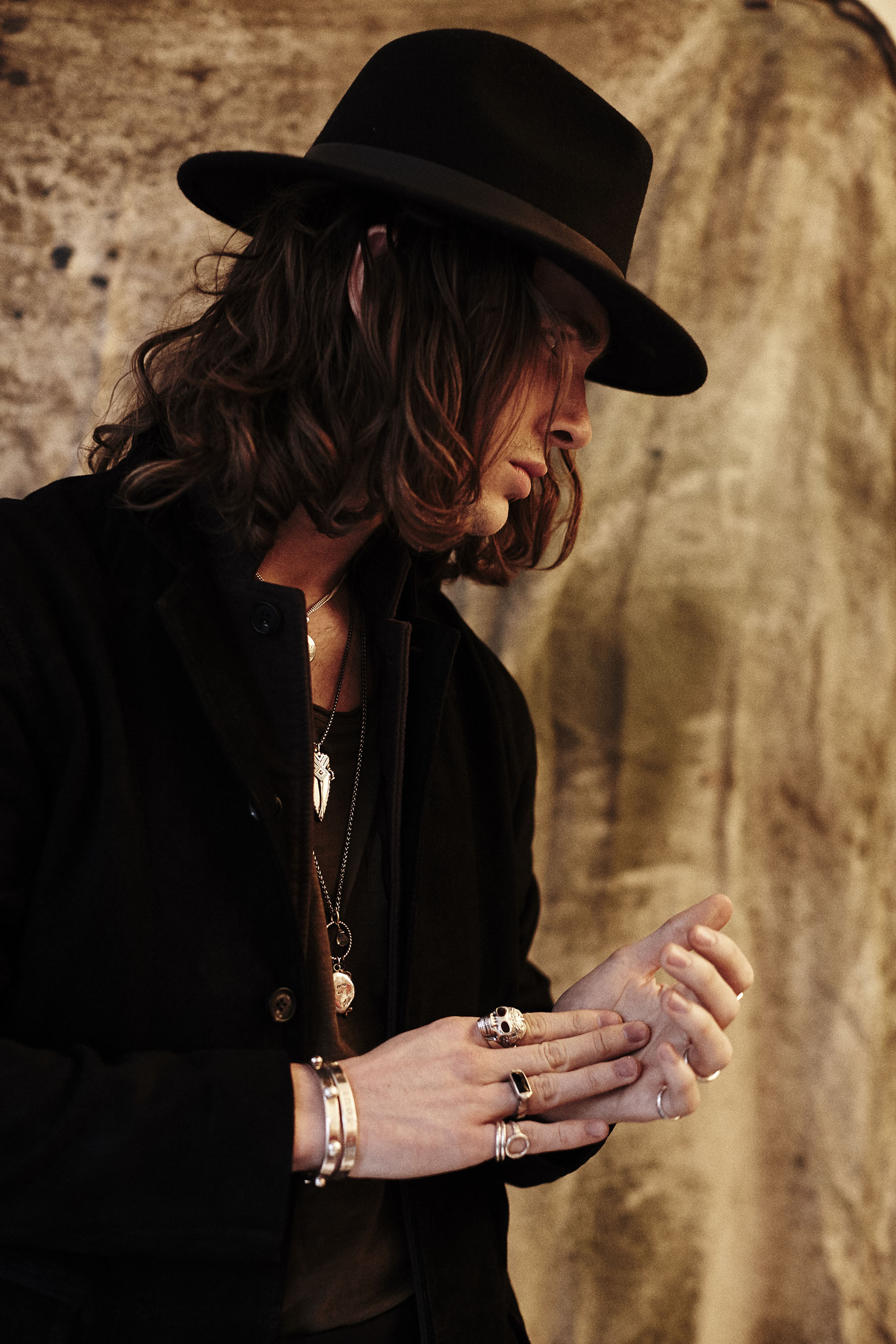 And yet INK really did form spontaneously. Dorigo and Poynter met on the London fashion scene where, says Poynter, ‘we were usually the only musicians.’ Both had ties to the industry – Dorigo has recently collaborated on the Burberry Acoustic campaign, while Poynter is a regular face at Fashion Week,  who’s modeled for Louis Vuitton, Topman and Joshua Kane. They connected over what set them apart from the standard fash-pack, and when they were introduced to drummer Alexander (through the traditional ‘mutual friend’ route), the spark was lit.

‘As soon as I’d see Todd at one of these places, I’d make a beeline for him and we’d hang out,’ continues Poynter. And after ‘sliding into [Dorigo’s] DM’s’, it wasn’t long before the inevitable was set in motion.

‘The cool thing was, there was no real intention of starting a band straight away. I think my first message about writing to Todd was like, “do you want to come over with your guitar?”. We just wrote something there and then in a couple of hours, and it was very easy and lot of fun.’

‘In the end, I just set up camp at Dougie’s and we just had a month or two of wake up, write up, record,’ adds Dorigo. ‘Some days we’d get up and just chat for a couple of hours. We opened up about a lot of stuff, and it got quite personal.’ 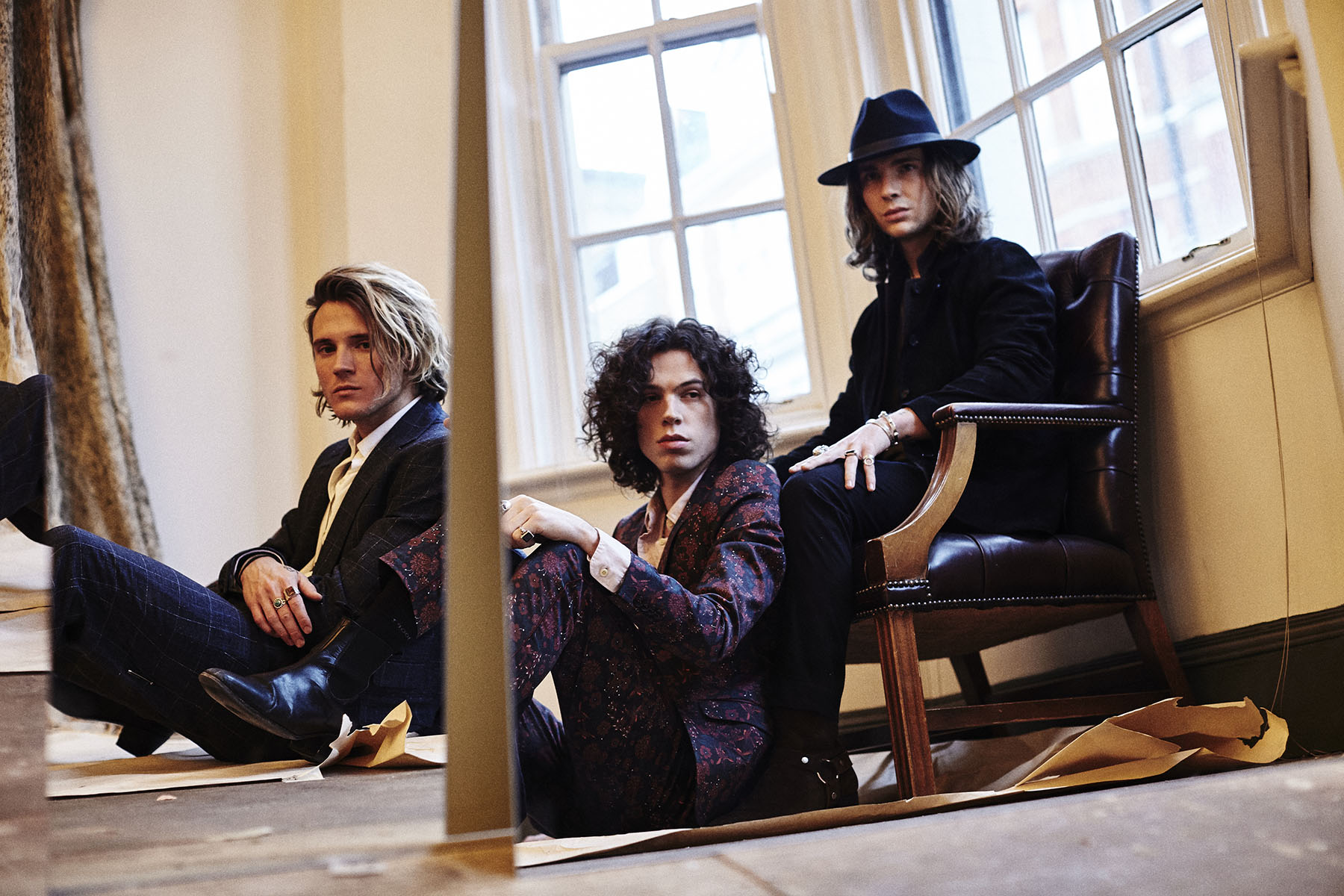 A chirpy morning coffee seems like unlikely origins for an EP that offers more than a murmur of the melancholy (they cite Nick Cave and poet Oliver Clarke as major references). I mention that their music sounds more like the product of sultry midnight beers. ‘Always the morning over a coffee,’ Dougie protests. ‘It was like caffeine fuelled therapy. I make some strong coffee, man!’

They may have not set out with the intention of hitting the studio (and then, naturally, the stage), but after accumulating ‘literally hundreds of ideas’ between them, it became evident that their little project was destined for greater things than Poynter’s dining table.

‘I’d been in a band before, but I was actually working for the family business in Yorkshire when I got the call,’ says Alexander, when I asked him where his part in the narrative began. ‘I was on a train and got a call from a friend, who said he’d thought I’d be good for it. He sent me some stuff and I thought it was great – I loved Todd’s voice and the vibe they had and we talked some more, and I drummed a bit…’, he trails off.

Poynter adds, ‘we’d auditioned a few guys already, and weirdly, the mutual friend had told us [about Corey] when we were still demo-ing’. He called me up and said, “Dougie mate. I’ve found you a drummer, look no further.” And he was right.’

“The more songs we wrote, it helped us to find where out where our tastes cross over and I think that’s how we found somewhere new and exciting”

Their music has evolved as effortlessly as their relationship. I tell them that ‘Symphony Woman’ in particular reminds me of early-noughties Arctic Monkeys, and though they don’t hate the comparison, it’s definitely not what they’re going for. Queens of the Stone Age were mentioned more than once, with a sprinkle of 1980s glam rockers T-Rex. Yet the music they each grew up with follows a more predictable trajectory; The Kinks, The Smiths, ‘a lot of the British Invasion and British rock n roll.’

Of the writing process, Poynter explains that ‘the majority of the time it’s the melody that comes first. Todd had the melody idea [for ‘Symphony Woman’] and that kind of became the pre-chorus.’

‘The more songs we wrote, it helped us to find where out where our tastes cross over and I think that’s how we found somewhere new and exciting,’ adds Dorigo. So we kind of built this whole song around this pre-chorus idea I had, and it’s not even like we were really paying too close attention. It’s only after that you realise where you can perfect [an idea].’ 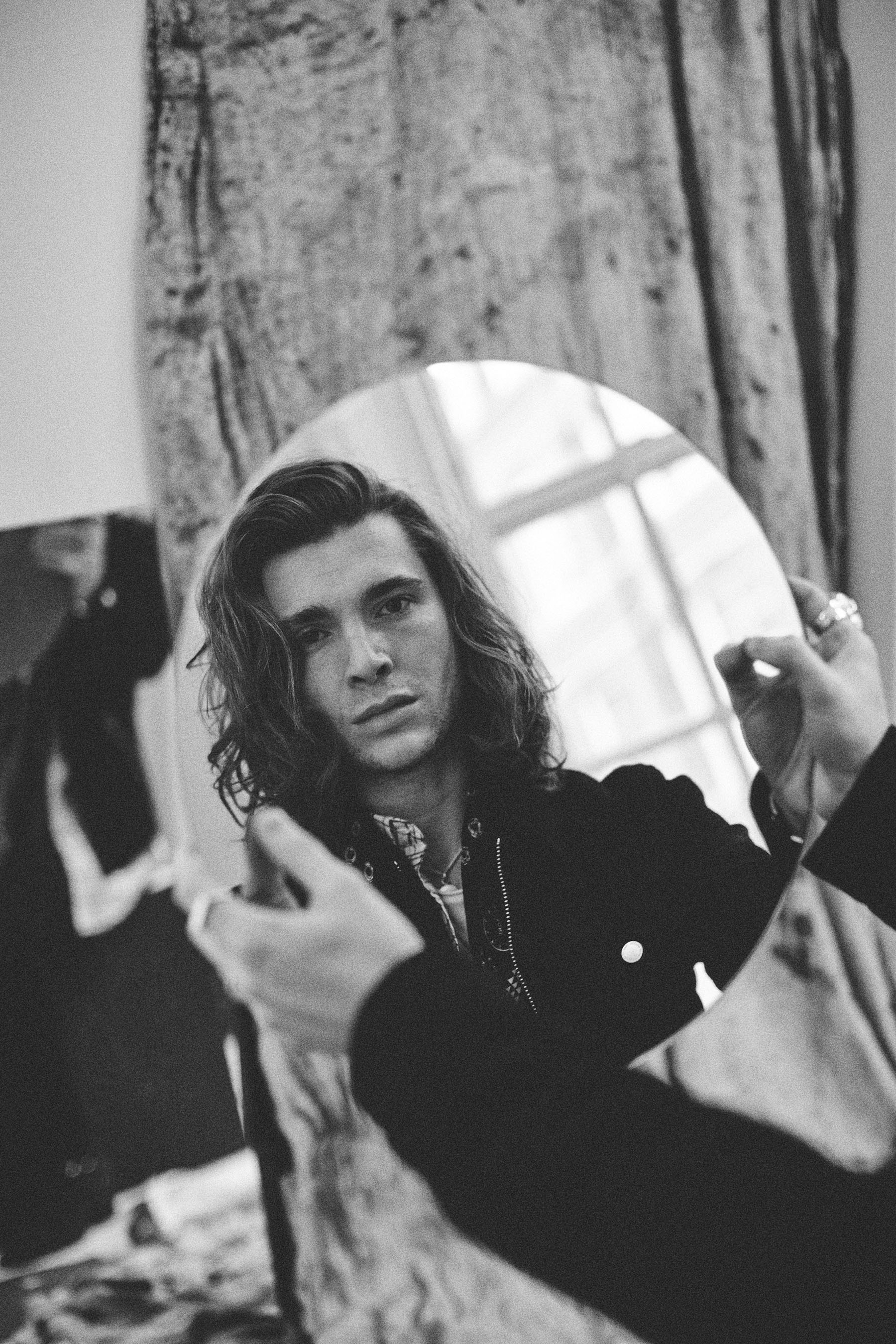 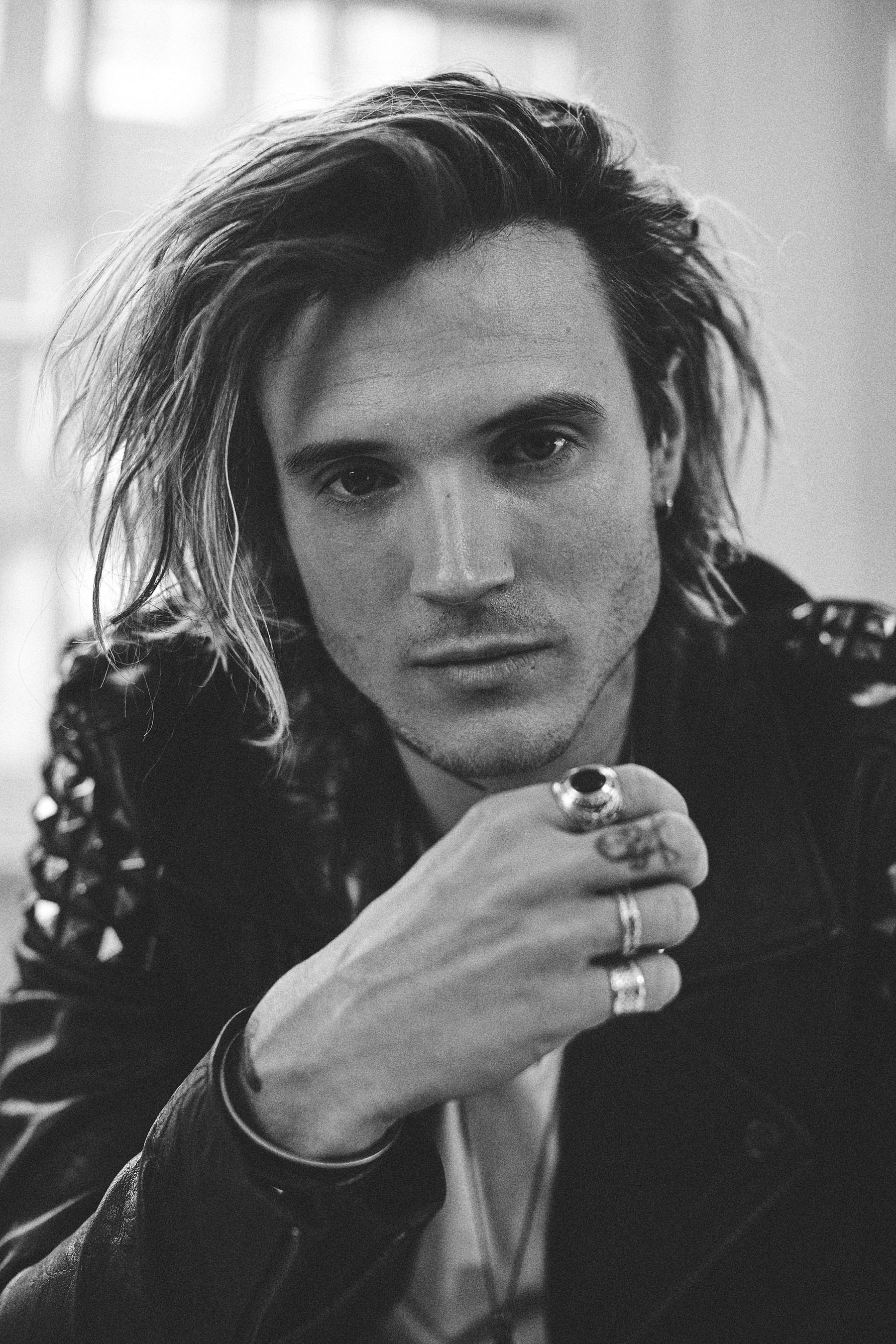 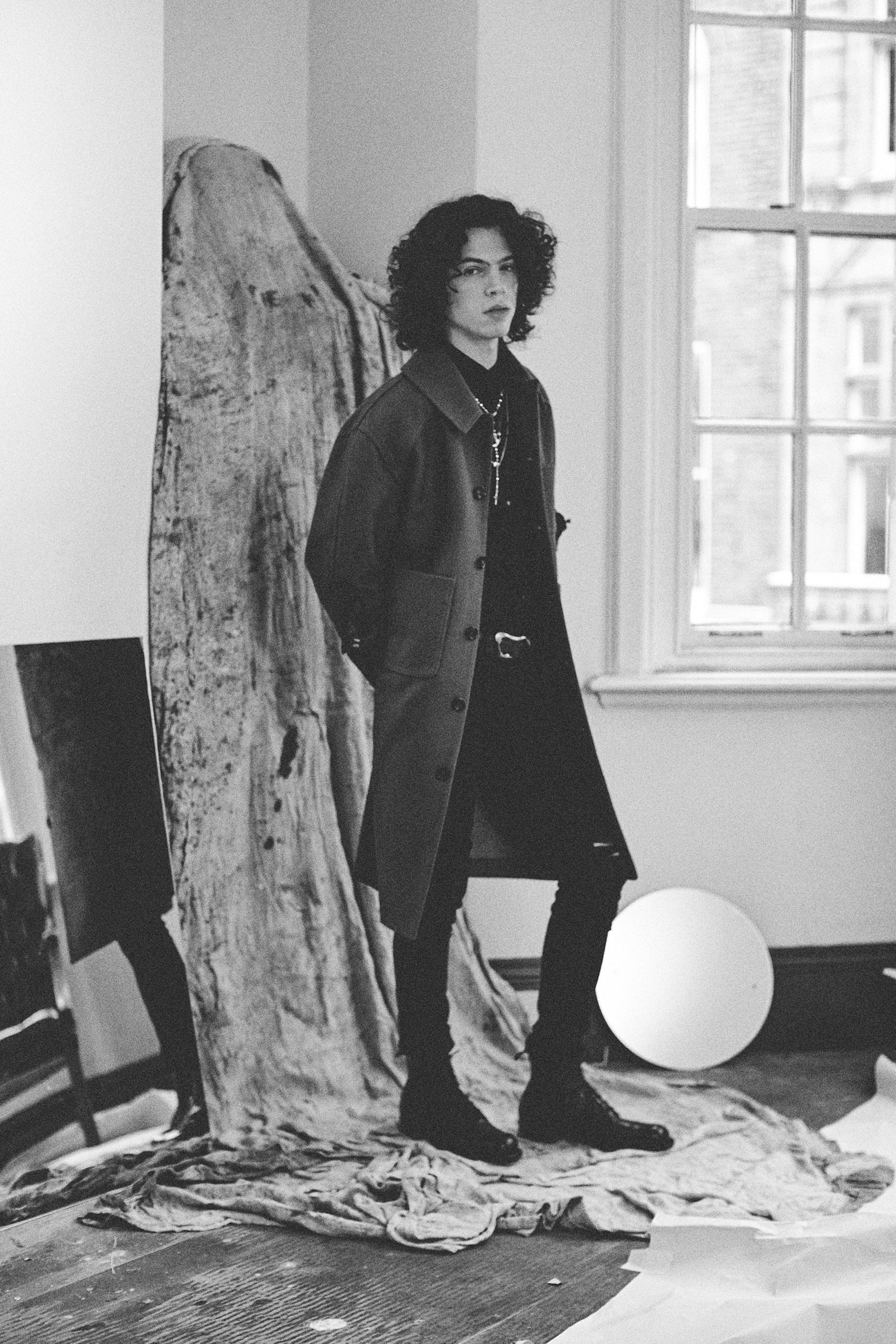 INK may not have intended to launch a revival of the grungy brand of bass-heavy rock that dominated the charts a decade or more ago, but a focus on aching lyricism and poetic sentiment is something that’s been sorely missing from the mainstream in recent years. That said, the trio are far from dismissive of the fellow up-and-comings they’re sharing the scene with.

‘I’ve been listening to a band called Big Thief on iTunes,’ Dorigo says. ‘They’re already making waves in America, but their last two albums have been really, really good.’

‘And there’s a really cool scene in California,’ says Poynter, who’s early musical influences, like Blink 182 and NOFX, hail from the sunshine state. ‘It seems really buzzing with loads of tiny bands with loads of potential.’

When it came to naming the band, INK is categorically not so superficial as to be related to their (plentiful) tattoos. As evidenced by the collective intake of breath and murmured ‘tutting’ when I mention it.

‘Have you heard of Ralph Steadman?’ asks Poynter, referencing the illustrator who did the artwork for much of original Gonzo journalist Hunter Thompson’s later work. ‘Really controversial artwork,’ he explains. ‘He starts all of his painting with a giant Indian ink splat, and then works from there. There’s a documentary called No Good Reason that shows his whole process that we thought was so cool, because that’s how we build our songs – creating something from some kind of mess of ideas. And also it didn’t sound too pretentious, I guess.’

INK’s appeal is not just their unpolished style of rock. They’re building something authentic up from scratch – eons away from  pop punk or family businesses up north. Look out for INK at your local venue this summer, for some good, honest, gigging. 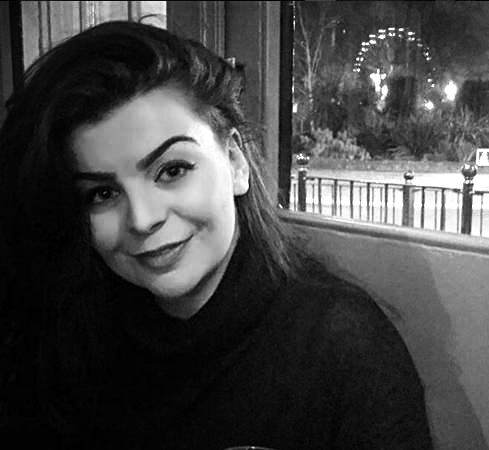 Marianna is a multi-platform journalist and the Editorial Assistant at PHOENIX, with a background in Women’s Lifestyle and social commentary. A recent MA graduate from Goldsmith’s College, Marianna launched and edited a student magazine and blogging platform, darling nikki, which she hopes to continue in 2018.