From nepotism to nukes, the president is spoiling us…

After over 100 days of the strangest, most divisive, and least coherent presidency in American history, you’d be forgiven for reaching a state of incredulous mental exhaustion by the bizarre behaviour and anti-news emerging from the most famous address in the world.

Certainly that would chime with the reported feelings of demoralised White House staff, who no doubt fantasised about crafting soaring, Sorkin-esque speeches and steering their maverick boss to rhetorical greatness, but instead have found themselves either kept entirely in the dark by their mercurial master or shoved out on a limb and forced to justify the new administration’s frequently belligerent, often shaky grasp of the law, history and even its own policies.

Rumour has it President Trump is going to replace his comms team with a crew of hard-line right-wingers blooded in the dark, tainted halls of Fox News. If true, it would hardly be his strangest decision, and it’s easy to imagine sighs of relief amongst battered idealists and ambitious young politicos as they clear their desks, no longer forced to try and spin a tapestry of capability and wisdom out of such ragged, fetid threads.

These are just ten of the most bizarre, brain-boggling truths about Trump’s presidency as we approach the one-tenth milestone of his presidency. And this is just his first term…

10. The Short List
One of the crucial roles of a new president is doling out jobs across government. From top scientists to the country’s 188 ambassadors and the person responsible for checking the quality of America’s eggs, there are a lot of positions – more than 4,000 – of which over 1,000 have to be vetted by the Senate. Trump has barely managed to recommend or fill a few handfuls, leaving an awful lot of empty desks and twiddling fingers in key departments across the nation. Even the third most important job at the Pentagon remains empty, and Trump’s delay – even over the jobs that don’t need a Senate thumbs-up – compares extremely poorly with his predecessors and suggests a worrying paralysis at heart of the White House. And when you really need to know if your eggs are up to scratch, that’s a big problem.

9. In This White House
While he hasn’t been quick to bring in the experts needed to implement government policies (maybe because there aren’t many?), Trump was swift to surround himself with his nearest and dearest in the Oval Office. Most notably his son-in-law Jared Kushner, a 36-year-old real estate mogul from serious wealth who, despite having absolutely no political experience, has been officially tasked with small-fry responsibilities including: bringing peace to the Middle East; sorting out America’s relationship with China; and overhauling government so it works more like a business. It feels a little like putting the rotund Go Compare opera guy in charge of the Royal Philharmonic, the Budget and the nuclear button. At least he’s got that well-known policy expert Ivanka by his side for the really tricky issues.

The world’s premier statesman has also found time to row with Arnold Schwarzenegger about TV ratings, accuse Barack Obama of tapping his phone with absolutely no evidence, and even burn national treasure Snoop Dogg about his “failing career”.

8. The War at Home
There has never been a presidency so deeply and publicly antagonistic to the press corps assigned to report on its workings. From the infamously explosive briefings from apoplectic bullfrog Sean Spicer to Trump’s trademarked and dangerous declarations of “fake news” to decry anything that paints him in a less than glowing light, we’ve entered a strange new era of political reporting where Saturday Night Live is now as astute and insightful a political barometer as the Wall Street Journal. We’ve seen the BBC berated, Buzzfeed banned from briefings, CNN castigated and the New York Times nailed, and in April Trump became the first president to miss a White House Correspondents’ Dinner since Ronald Regan in 1981. And he’d just been shot.

7. A Proportional Response
There’s a fun game which involves taking a bunch of Trump’s tweets and a bunch of words randomly jumbled together by a six year old and trying to work out which represent the policy pronouncements of the most powerful man in the world. Analysis shows much of Trump’s social media splurges take place late in the evening and coincide with whatever noxious guff Fox News happens to be spewing out at the time. The world’s premier statesman has also found time to row with Arnold Schwarzenegger about TV ratings, accuse Barack Obama of tapping his phone with absolutely no evidence, and even burn national treasure Snoop Dogg about his “failing career”. All while sitting an arm’s length from the nuclear football. And someone really needs to fix his broken caps lock key.

6. The Drop-In
There’s nothing wrong with escaping the claustrophobic Washington beltway to get a sense of perspective. But when the alternative is a 126 room, isolated club for the mega-rich in exclusive Palm Beach, owned by the president himself, then the waters become a little muddier. Especially when, after the election, Mar-a-Lago fees doubled to a whopping $200,000 a year as membership suddenly included access to the most powerful man in the world. This was especially apparent when administration big cheeses gathered on the veranda after North Korea launched a test missile, giving club diners a ballistic-eye view of top-secret deliberations. Trump’s resort has hosted visits from the leaders of China and Japan, and tight security has seen the local airport shut down multiple times, which has been exactly as popular with the locals as you might expect.

5. Enemies Foreign and Domestic
Trump’s attitude to the rest of the world during his campaign was belligerent, dismissive and resolutely “American first” – appealing to the disenfranchised and frustrated. He promised he’d give China a damn good rattle and publicly chastise them as currency manipulators. He’d swiftly erect a wall to keep out all those Mexican rapists and murderers. He’d ban Muslims from entering the country. He’d sit back and let Russia and Syria deal with problems on their doorsteps, keeping American forces out. What actually happened when he got into power: he hosted a friendly meeting with Chinese premier Xi; his infamous wall stalled; his Muslim ban was ruled completely unlawful; and he bombed a Syrian military base. Just to prove he means business on the international stage despite this athletic flip-flopping, he sparked a row with that well-known enemy of the American people, Australia, over refugee resettlement. Next up – war with Liechtenstein over chocolate exports.

4. Someone’s Going to Emergency, Someone’s Going to Jail
The ongoing mystery surrounding the relationship between Putin’s Russia and Trump’s senior staff brings a whiff of impending scandal that will out-stink even Watergate. Trump publicly calling on Russia to hack Hillary Clinton’s emails last year didn’t bode well, especially as it seems that’s exactly what they did, and soon after his campaign manager resigned over accusations of dodgy funding. Most damaging, though, have been the relations of two of Trump’s closest advisors with senior Russian officials – national security advisor Michael Flynn resigned after conjuring a wondrous piece of double-speak to avoid admitting he out-and-out lied about illegal calls with the Russian ambassador (he “inadvertently briefed the vice-president-elect… with incomplete information”) while Jeff Sessions, the Attorney General, fibbed to Congress about his own conversations with Russian bigwigs during the election campaign. It’s no wonder the FBI launched a huge, wide-ranging investigation into Russian meddling in the US election that threatens to destabilise an already shaky administration. 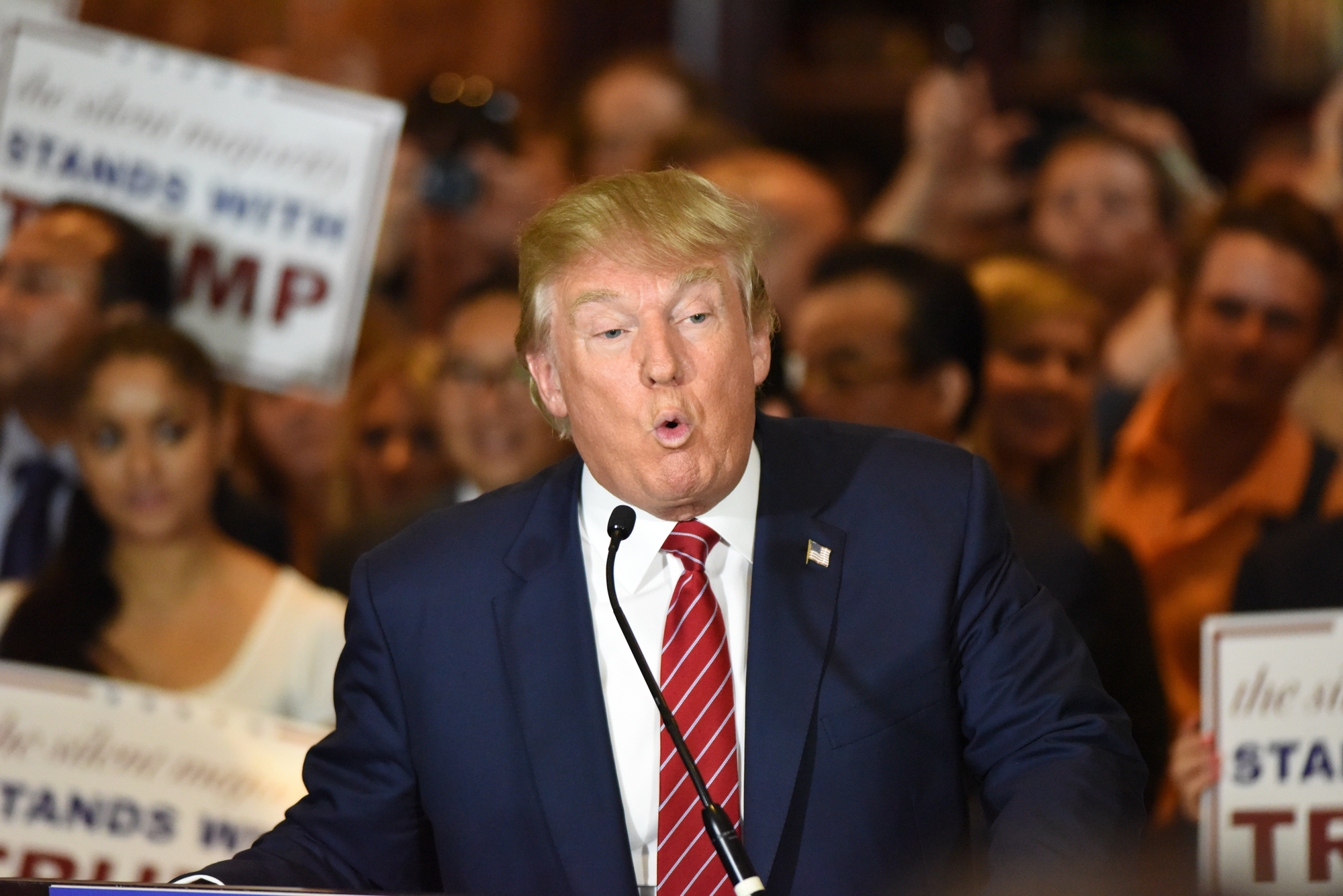 3. Take Out the Trash Day
Possibly the most shocking move of Trump’s presidency (so far) has been the blitzkrieg removal of FBI Director James Comey from office. Comey, the man who was leading the investigation into the Trump administration’s links with Russia, had previously been a golden boy after his announcement that the FBI was re-opening an investigation into Hilary Clinton’s emails sent her presidential bid into a tailspin. Trump claims he lost faith in Comey from day one, and even sent him packing with a veiled threat about their taped conversations, though experts suggest that such a flagrant obstruction of justice could lead to Trump being the third ever president to be impeached. You feel, though, that he’d relish the opportunity to bring his unique brand of arrogance and aggression to the Senate floor.

2. Five Votes Down
To give him his dues, one of the most remarkable moments of Trump’s presidency has been the surprise resurrection of his “repealing and replacing” of Obama’s hard-fought-for Healthcare Bill. Only a couple of months ago, moves to create a new federal healthcare policy were declared dead and buried after Congressional Republicans refused to back changes that would remove healthcare from millions of Americans and make it next to impossible for people with pre-existing conditions to get coverage. But in a piece of legerdemain almost as impressive as taking the White House, a replacement Bill was squeezed through Congress last month by 217 votes to 213, making it increasingly likely that a key pledge will make it onto the statute books in some form or another after all. After such a chaotic few months, any movement forward is seen as cause for applause.

1. Game On
President Trump has already filed the papers needed to allow him to seek a second term in 2020, and his campaign adverts seem to be pushing the dream of a full 8 year stint in the White House. And after the unforgiving drubbing he gave to every Republican challenger he debated it’ll be a brave soul who stands against him from his own party, while a serious contender has yet to emerge from Democratic ranks that have been overshadowed for years by the Clinton colossus.

We’ll just leave that one there…